The turtles from the original Rocky are alive and well, now “over the hill” and still living with Sylvester Stallone. Rocky still packs a punch, even forty-odd years after its release. It’s a classic underdog story. And speaking of dogs, the animal kingdom plays a small but important role in the franchise.

For some movie lovers out there, the true stars of the original are Cuff and Link. These characters aren’t boxers, though sound like they could be. In fact they’re turtles!

The pair started off as babies. However, star Sylvester Stallone had a surprise for fans when he made Creed II last year. Times may have changed for Rocky Balboa, but some things stay the same, with Cuff and Link appearing alongside Michael B. Jordan’s Adonis Creed.

Stallone was so taken with Cuff and Link back in the Seventies that he took them home after hanging up his boxing gloves. The proud adoptive parent took to social media to share the love for these heroes in a half shell.

Describing them as “my original buddies”, it’s clear they’ve been through a lot together – the turtles are now middle-aged and Stallone is 73. This slow-moving curveball caught Twitter by surprise, with reactions going through the roof. “Somehow it makes me feel good knowing that Cuff and Link are still alive,” commented one user.

“I was already a fan but in reading about Cuff and Link and your absolute love of animals – I’m an even bigger fan,” read another glowing tribute.

In CREED 2 with my original buddies from the first Rocky … CUFF and LINK , now about 44 years old!

Aside from capturing the audience’s hearts, these turtles helped bring together Rocky and his true love Adrian (played by Talia Shire). As website UniLad put it this year, “The relationship between Rocky Balboa and shy pet shop worker Adrian Pennino is one of the sweetest in cinematic history, with their confessed love for each other being the true victory of the film.” 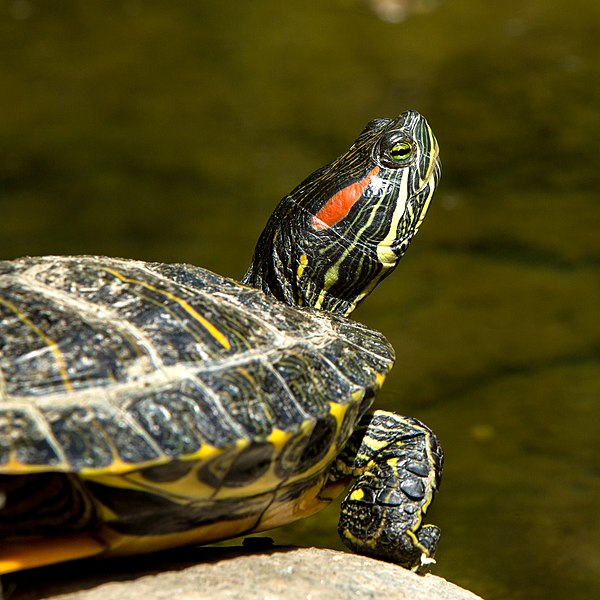 Cuff and Link were Red-Eared Slider turtles. Photo by Sheila Sund CC by 2.0

The film put Stallone on the map. He certainly moved faster than a turtle to complete the project, reportedly writing the screenplay in under a week. Rocky and Adrian’s relationship endured through four sequels. Sadly by the time revival movie Rocky Balboa arrived in 2006, the character had passed away from cancer (Shire herself is very much alive!). Rocky opened a restaurant in her honor.

Creed (2015) continued the franchise, via the son of Rocky’s notorious opponent Apollo Creed. Featuring Cuff and Link in the second chapter gives fans a continuity-based treat and shows that despite all those bloody bouts in the ring, Stallone’s fighter never forgot his roots.

The versatile star also shared an image of his late dog Butkus in recent years. “When I was 26, totally broke, going nowhere VERY fast, owned two pair of pants that barely fit, shoes that had holes in them and dreams of being successful were as far away as the sun,” Stallone wrote. “But I had my dog, BUTKUS, my best friend, my confidant, Who always laughed at my jokes, and put up with my moods, and was the one living thing that loved me for who I was!”

There were other non-human characters in the Rocky series who made an impact. Enter none other than SICO the robot butler from 1985’s Rocky IV! The move may have seemed absurd but there was a heart-felt reason behind putting a robot in Rocky.

Stallone had seen SICO on TV together with its creator Robert Doornick. Inspired by Doornick’s idea that the robot could help autistic children express themselves, Stallone saw the possibilities for his son (now fellow actor) Seargeoh who himself is autistic. Eventually a part was written for SICO, who in the movie looks after Rocky’s brother in law Paulie (Burt Young).

A Telegraph article from 2016 wrote that SICO “has had a more successful acting career than many of his fellow cast-members… it is the first non-human member of America’s Screen Actors Guild.” Rocky may be a saga about professional and personal battles, but the fringe characters definitely have their own story to tell.