An image of a miracle of Jesus may have been fund in the ancient city of Hippos, overlooking the Sea of Galilee. There stands the ruins of an old church which was burned down long ago.  The building was built in either the late part of the fifth century or early in the sixth, and was likely burned in the seventh century, during the Sassanian’s Empire’s conquest of the area, according to Fox News.

The longer men have lived in an area, the more common it is to find the remnants older civilizations and times, and Israel has been populated for millennia.  What makes this particular church interesting, however, is what archaeologists recently found under the rubble and ash. 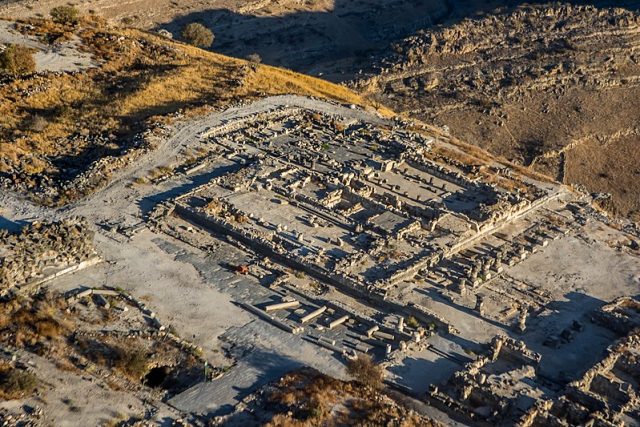 Site of Hippos in Israel. Photo by Liorca CC by SA-4.0

The churches floor boasts a colorful mosaic containing inscriptions and images of baskets containing loaves and fishes, which experts believe may depict Jesus’s miracle of the ‘feeding of the 5,000’. 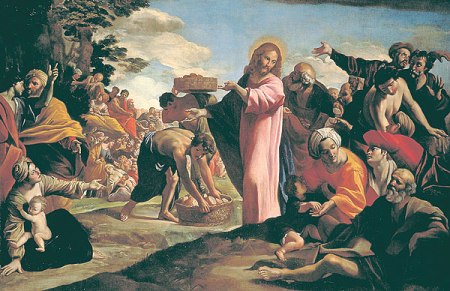 A spokesperson for the University of Haifa, who has been involved in the excavation, remarked in a statement that when the roof of the church was burning, inches of ash fell to the floor, covering and preserving the mosaic from the elements for the next 1,500 years. 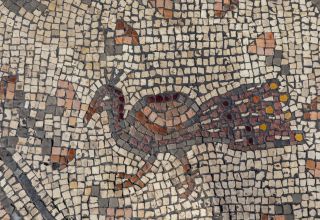 Detail from the mosaic. Photo courtesy of the University of Haifa

The mosaic depicts baskets of birds, fruit, and fish, and is thought to be referring to the miracle described in the bible, in Matthew 14:13-21, in which Jesus is said to have broken up five loaves and three fishes and used them to feed the multitudes.

Michael Eisenberg, PhD, is the head of the Haifa University team doing the excavation and said while there were certainly other possible explanations for the imagery found in the mosaic, it was hard to ignore the close parallels between it and the story in the New Testament.  He also allowed that there are some differences, as well.  Some of the baskets in the mosaic are holding fruit, for example, and some others hold three fish, rather than two, as is described in the bible.

Our Institute of #Archaeology exposed a colorful #mosaic at #Hippos that may be connected to the Feeding the Multitude #miracle performed by #Jesus, according to the New Testament.
Find out more here >> https://t.co/X0V0Iq9QlC pic.twitter.com/D4LxVTcoOo

Eisenberg’s statement also talks about the implications of the find. He notes that, although the bible doesn’t give the exact location for where the event was supposed to have occurred, only calling it ‘a remote place’, it’s generally believed by religious scholars to have happened near the Church of the Multiplication in Tabgha, on the northwest side of the Sea of Galilee, according to Live Science.  However, that somewhat vague biblical description could also be applied to the area north of Hippos, where the Burnt Church is located, as well.

The church is situated at the western edge of Mount Sussita, overlooking the Sea of Galilee, and the Jesus ministry, where most of his miracles are said to have happened.  Eisenberg suggests that the locals would have been familiar with the miracles when they occurred, and would have a much better idea about the locations involved than modern scholars would.

That would suggest that that the mosaic was commissioned by someone who wanted to ‘create an affinity’ with a miracle which occurred nearby. Hippos is located on the eastern side of the Sea of Galilee, so if Eisenberg’s suppositions are true, then religious scholars may have been completely wrong about where the event is supposed to have happened.

He further said that he believes that Jesus performed the miracle on the east side of the Sea, before walking across the water to the northwestern shore, which is the area where the Church of the Multiplication is located.  That church also has a mosaic whose imagery makes reference to the same miracle, although it shows two fish and only four loaves of bread, not five, meaning that the mosaic in the Burnt Church correlates more closely to the story in the New Testament.

The newly-uncovered mosaic also have some variation from biblical description, however, so the team’s speculations will have to remain speculations, at least for now.  All the same, the mosaic may offer scholars new avenues of thought and inquiry as they attempt to piece together the place where faith and history come together.