A cache of ancient Egyptian coffins have been unearthed that are, remarkably, still sealed. Egypt is an ancient land, and one full of hidden relics of the civilizations that inhabited it deep in the past.  It has long been a source of fascination for those who have an interest in archaeology.  As a result, excavations have been going on in that country for hundreds of years.  By now, truly remarkable finds don’t come along as often as they used to.  Lately, though, scientists have made a number of new discoveries in a short period of time.

CNN recently reported that a cache of over 20 wooden sarcophagi have been found in Luxor, Egypt.  The Egyptian Ministry of Antiquities held a press conference, saying that the coffins were well-preserved and ‘exactly as the ancient Egyptians left them’. Particularly since they’re made of wood, the coffins are in a good state of preservation and pictures of the coffins show the drawings and engravings that adorn them. 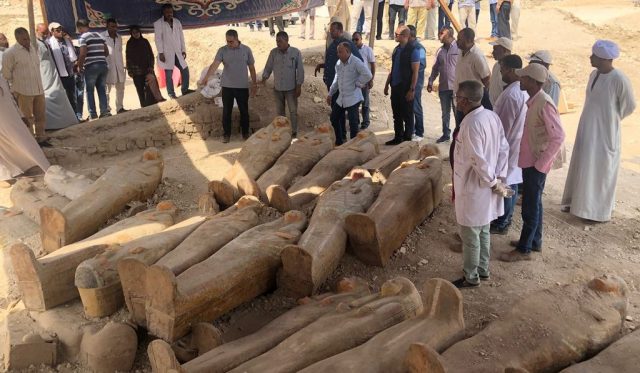 Remarkably, the coffins were still sealed, which is very rare. (Egyptian ministry of antiquities)

There hasn’t been any official word yet on just how old the sarcophagi are, but it’s been established that during the time of the pharaohs, the Asasif burial site was used by persons of some rank – officials and nobles.

There will soon be another press conference, which will hopefully reveal more details about the implications of the find.  Even now, however, representatives from the Ministry of Antiquities have called it ‘one of the largest and most important discoveries to have been announced in the last few years.’ 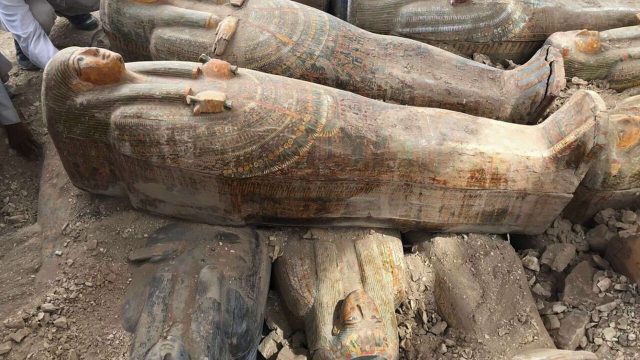 Photo by Egyptian Ministry of Antiquities

The coffins were found in what used to be called Thebes, but is now part of Luxor, on the west bank of the Nile.  They were distributed over two levels of the Asasif necropolis, an ancient burial ground.  It holds tombs from the Middle, Old Kingdom, and Late periods of Egypt, a period of time spanning over 1,600 years, and beginning nearly 2,000 years ago. 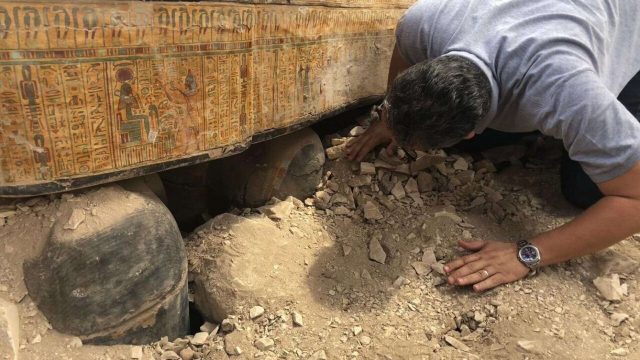 Only a few days before the discovery of the coffins was announced, the details around the discovery of an ancient ‘industrial area’ were announced, located in the Valley of Monkeys in Luxor.  The area contained a large kiln and around 30 workshops whose purpose was to create pottery, furniture, and decorative items for tombs. 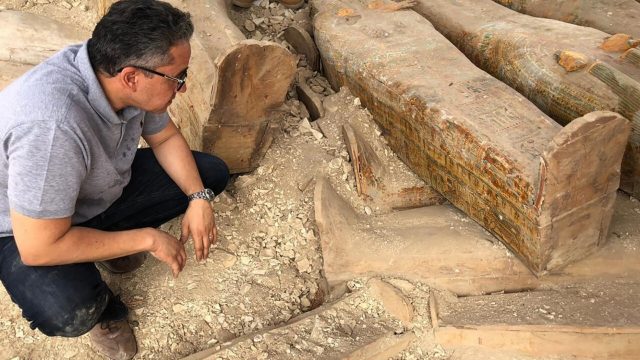 Photo by Egyptian Ministry of Antiquities

According to Smithsonian, pottery found at the site indicates that it dates from the 18th dynasty, which covers the period between 150-1292 BC.  Besides the workshops themselves, and a large, in-ground water tank, the site also yielded artifacts such as a scarab ring and quantities of inlay beads and the gold foil used to decorate sarcophagi.

One of the things which makes this find exciting to archaeologists is that it gives them an opportunity to gain insights about what sort of tools and techniques were used in preparing tombs for the wealthy.  Previously, all the knowledge that was available came from the tombs, themselves.

Another recent, unrelated find, was a 2,200 year old temple which was associated with Pharaoh Ptolemy IV, according to Fox News, which was discovered when work was being done on a sewage drainage project in the village of Kom Shakau in the early part of September.  The site was discovered while workers were drilling, and scientists found that the ruins had inscriptions which referenced Ptolemy IV, as well as having walls with images of various birds and animals on them. Ptolemy IV was pharaoh from 222-205 BC.

In May, Fox News also reported the discovery of a cemetery about 4,500 years old, which was discovered in Giza, not far from Cairo.  That find included burial shafts and tombs holding high-ranking officials, and has been dated as being from between 2465-2323 BC.  Ashraf Mohi of the Giza Plateau archaeological site noted that the cemetery was re0used later, during the period from 664-332 BC, as evidenced by finding various artifacts such as funerary masks and coffins which date from that period.

There have been other finds in the relatively recent past, as well, in sheer defiance of the fact that historically important finds have been less common, overall.  It will be very interesting to see if the new trend continues, and, if it does, what it brings to light about the ancient civilization