How to Move a Historic Mansion? Tug it Across the Chesapeake Bay

An innovative way has been used to transfer a historic 18th century mansion across the Chesapeake bay. If innovation and progress are long-held values of American culture, they do have a certain downside.  As new things come into fashion, older things are often simply abandoned and left to rot.  That’s true for small things, like old clothes, but it’s also true for large things, like buildings.

As local economies rise and fall, so do neighborhoods and the dwellings within them.  That’s what happened with the historic mansion known as Galloway in Easton, Maryland. In an effort to save the venerable old house from being destroyed to make way for new development, its current owner put it on a barge and had it moved 50 across Chesapeake Bay and then taken to a new site in Queenstown, where it will be restored and continue its remarkable ‘life’, according to a report from local television station WJLA.

There’s a website dedicated to the building’s big move, which says that the Georgian mansion has been sitting empty and neglected.  It was originally constructed in the years 1760-1764, for William Nichols and new wife, Henrietta.  It sat in the middle of what was then their 600-acre plantation in Talbot County.  Galloway was where the couple’s four children were all born, and where both parents died early – by 1778.

The new owner of historic Galloway Mansion in Maryland has decided he doesn’t like where he lives.

So Christian Neely has decided to put the 259-year-old three-storey house on a barge and take it across Chesapeake Bay.#Chesapeake #Maryland #UnitedStates pic.twitter.com/BMYjtE2HG8

Over the course of the last two and a half centuries Galloway has served several functions.  Besides being a plantation, it’s also been a dairy farm, a stockyard, and even spent 50 years as a florist’s before eventually being left to stand empty.  After its move and restoration are complete, it will once again serve as a family home.

Before its restoration, of course, it first had to be moved to its new location, which was no mean feat.  The mansions newest owner, Christian Neeley, worked out a comprehensive and rather complicated plan to bring Galloway to its new location. 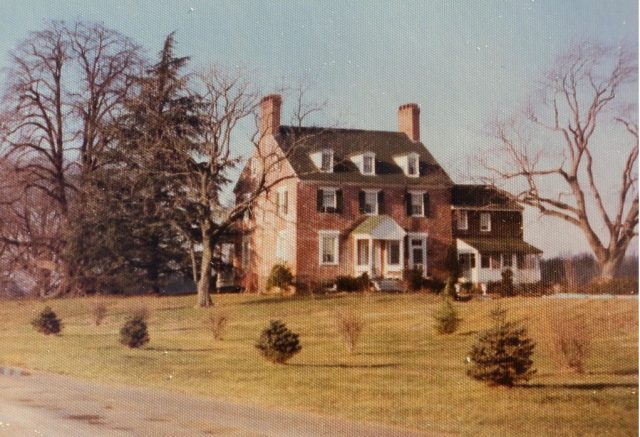 The first thing that had to happen was that the entire structure had to be picked up and placed on a large flatbed, then driven several miles to the town of Easton.  Because of the house’s size, making the trip down Route 322 meant actually closing the roads while the flatbed was on the move.  Once it arrived in Easton, it was shifted onto a large barge on Chesapeake Bay.  The barge floated the house to its new site, a rather rural country estate which Neeley also bought.

The trip across the bay was about 50 miles – longer than the same trip would be, if you were driving, but the longer water route was simpler, logistically.

GALLOWAY MANSION: After traveling on the road, this historic house is being loaded onto a barge so it can float 50 miles on the Chesapeake Bay to its new home. We’ll have more details tonight in the News Hour. @47abc #BecauseLocalMatters pic.twitter.com/FO4E5hClPq

A related report in the Charlotte Observer noted that the house has three stories and weighs about 800,000 pounds.  The cost of the move came in at nearly $1million.

Once the home is safely put down at its new site, Neeley plans to add two additions to the building with the idea of making it a home for future generations.

The company that moved the Galloway house is Expert House Movers, and they’ve had experience with moving other historic buildings. Among the structures they’ve moved over the years are two lighthouses, during the 1990s.  Given the difficulty of moving such a large building, including the already-mentioned road closures, the work of moving the house to Easton happened late at night to minimize the impact of the closures on the community.  Despite the late hour, a number of people in the Easton area went out to watch to the process and see the Galloway house roll on by, sitting in lawn chairs and eating snacks.

There were a few problems with the barge that would carry it for most of the trip.  It developed ballast issues and began to tip.  Eventually they figured out that would need a larger boat.  Crews from the moving company used forklifts to build ramp ways of flat pieces of wood supported by lumber, which were used let the flatbed move from land onto the barge.

SEE: One of America’s Finest Tudor Revival Estates Up For Sale – Take a Tour

The entire loading process took about eight hours and a great deal of maneuvering, but eventually the mansion was loaded and stable, and it started its journey to hit new home. In a time when progress is often king, it’s both fascinating and wonderful to know that some old things continue to hold their value.