An English ecologist has brought back the Nazi “Heck” cows and is has put an agricultural twist on Jurassic Park. He isn’t breeding dinosaurs, but reviving historic animals and a natural way of life taken from our ancient past in order to promote conservation and avoid what he thinks is going to be the fallout from Brexit.

Based in Lifton, north Devon, Derek Gow has a plan that is ambitious and also mildly controversial. He’s following a process called “rewilding”, where nature is encouraged and left to take its course.

“We have taken 115 acres of our farm out of agricultural production, put up one big fence around it and allowed various groups of animals to start changing and modifying the habitat naturally” he told the Daily Mail.

There is a lot of talk about farming change. 4 million acres of Britain produce 1% of food. This is what remains when you completely destroy a landscape with sheep. 4 trees clinging to a cliff of 3500 acres. Farmed no ranched for tax payers subsidies alone. This is Taransay. pic.twitter.com/p7Y4H20Fz2

Among other creatures such as wild boar and beavers, the ecologist has brought in English wildcats. These feistier-than-feisty felines haven’t set their paws on British soil for a century and a half. Their diet includes unfortunate rabbits.

But it’s the introduction of Heck cows that has drawn the most attention, through the breed’s association with Nazis. Named after 2 German brothers who were interested in the idea of “de-extinction”, the notorious bovines are modeled on the auroch. This type of cattle died out during the Iron Age (c.750 BC – AD 43). 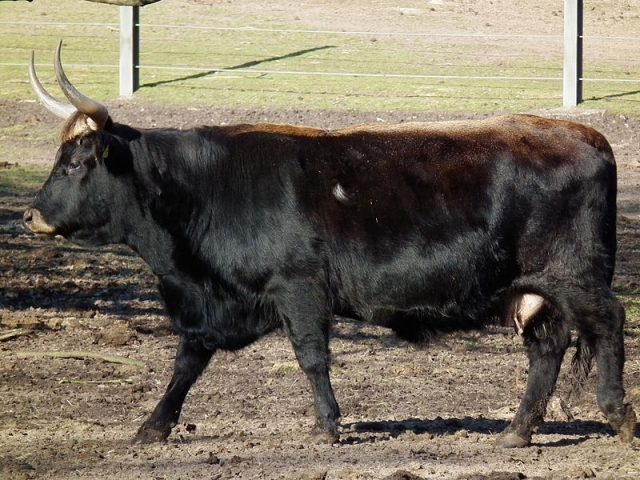 Heinz (a biologist) and Lutz (zoologist) became fascinated by the concept of “back-breeding”, which utilized existing animals with the right characteristics. These would then be bred in order to fashion a crude genetic replica. In the days before advanced DNA research, the Hecks relied on archaeology and documentation to realize their ambitions.

“The brothers traveled the continent, selecting everything from fighting cattle in Spain to Hungarian steppe cattle to create their aurochs,” Smithsonian.com wrote in 2017. “They studied skulls and cave paintings to decide what aurochs should look like”.

Heinz and Lutz “claimed success at reviving aurochs by the mid-1930s”. The animals “were tall with large horns and aggressive personalities, capable of surviving with limited human care, and in modern times would come to be called Heck cattle.”

Don’t forget my heck’s. They are much lovelier than your convential fuddy duddy moos pic.twitter.com/TCoBOkGaih

However the spectre of Nazism cast a long shadow over the pair. Heinz was suspected of being a Communist. That and his previous marriage to a Jewish woman saw him interned for a period at Dachau in the years before announcing his auroch breakthrough.

On the other hand, Lutz became close friends with Reich deputy Hermann Göring. Hitler’s second in command enjoyed Heck’s experimentation with the natural world, which tied into his fantasies about ancient German mythology. He even gave Lutz the title of Nature Protection Authority in 1938.

The herds were largely done away with by Allied Forces as the conflict drew to a close. While it would be wrong to draw comparisons between Derek Gow’s work and that of the Hecks, there is an intriguing historical parallel.

When Heinz and Lutz were developing their interest in the subject as boys, “zoologists around Europe were engaged in debates about the role of humans in preventing extinction and creating new species” Smithsonian.com wrote.

Check out a video below about the huge Nazi hotel which never had a guest:

It’s this combination of protecting the natural balance and rebooting the wild landscape that drives Gow. Talking to the Mail he revealed “Sixty percent of British species are in decline in this country and Britain is 180th on a list of the world’s most impoverished countries to live in when it comes to nature.”

There’s also the small matter of leaving the EU to consider. Farming UK reports that the situation “has forced the 54-year-old’s diversification plan to become a reality as he fears a loss of farming subsidies.” Gow’s motivations are ecological, yet he hopes by turning back the clock to a Stone Age environment he can also attract visitors and tourists to view his beasts safari-style.

Introducing the Heck cattle hasn’t been without its problems. The cows are naturally aggressive and Gow has had to have some put down. Despite this, the controversial breed may show a way forward for agriculture and shake off those dark links from the past.