Whoopi Goldberg is getting back into old habits, this time on stage in a musical revival of Sister Act. The Oscar winning star is reprising one of her most famous and beloved movie roles.

Goldberg returns as Deloris Van Carter, which she played on the big screen in the original Sister Act (1992) and its sequel the following year. The Eventim Apollo in London is the venue for what BBC News describes as a “newly-adapted version”.

Joining the cast as Mother Superior is British comedy legend Jennifer Saunders. She takes on the mantle of movie Mother Dame Maggie Smith. Goldberg made an appearance in Saunders’ sitcom Absolutely Fabulous back in 2002. 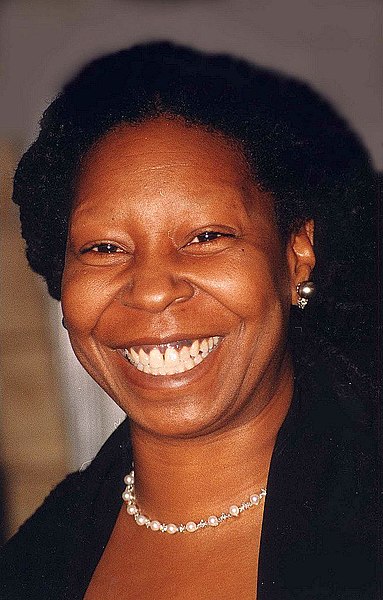 Goldberg explained how the action would play out in a Twitter video, saying Deloris was “A little older, a little seasoned but really still kind of out there.”

Saunders has hyped the show to the heavens and beyond, stating Goldberg’s presence may create “the event of the century”.

The musical was originally launched in 2006, with a book by Cheri and Bill Steinkellner. Alan Menken (The Little Mermaid) composed the music and Glenn Slater wrote the lyrics. It takes its lead from the movie plot which saw Deloris Van Carter go from lounge singer to nun, after her witnessing of a mob hit resulted in her seeking sanctuary behind the wimple. 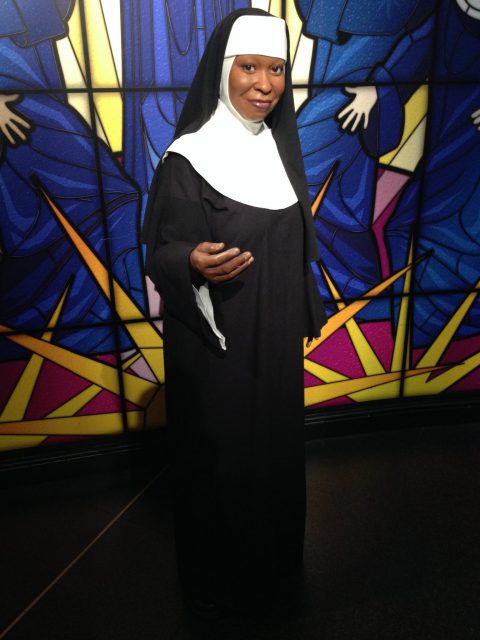 Once there, Deloris is tasked with organizing the choir by Mother Superior, all the while trying to stay one step ahead of hard nut Vince LaRocca (Harvey Keitel). A smash hit, the film blended comedy antics with soaring choral music and R&B. However, due to rights issues the musical has all-original tracks.

The second instalment was subtitled Back In The Habit. As well as Goldberg and Smith, the movies featured Kathy Najimy (Hocus Pocus) and Wendy Makkena. 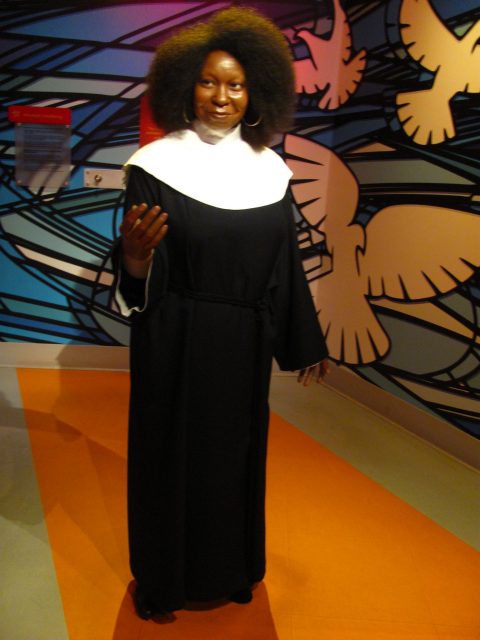 Bette Midler was the first choice for Deloris but decided to back out, a decision she came to regret once the box office receipts were in. The script received a rewrite from none other than the late Carrie Fisher. Star Wars’ favorite Princess was one of numerous scribes brought on board to work on the screenplay after Midler’s exit.

A 2017 Mental Floss article relayed the fun that went on behind the scenes. Najimy mentioned the Reno casino location where she and Makkena would gamble during their free time whilst still in their sacred costumes. “Wendy smokes, and we’d sit at the 21 table in our nun outfits with drinks in front of us” she revealed.

The franchise went from convent to courtroom twice. Actress Donna Douglas (The Beverly Hillbillies) had optioned the book A Nun In The Closet, which she claimed Sister Act had stolen its plot from. Douglas filed a $200 million lawsuit in 1993 but lost. Then in 2011 bona fide nun Delois Blakely accused producers of using her autobiography The Harlem Street Nun (1987) as a source. Again this legal challenge proved unsuccessful.

And it seems after some battles that the film franchise is making a comeback. Variety reported last year that Part 3 was underway, with Regina Hicks (Insecure) and Karin Gist (Star) writing the project. This time round the premiere will be on Disney’s new streaming service, Disney +.

Goldberg – who wants to appear in a cameo – spoke about Sister Act 3 while hosting The View. “I’ve been trying to get Sister Act 3 up and running, and really met with a lot of resistance” she said, before adding she heard “people saying nobody wants to see it, it’s dated, it’s old.” Clearly the producers of the new musical think otherwise.

This isn’t the first time Goldberg has appeared in the live show. She had a brief spell as the Mother Superior herself in 2010, when the show was at the London Palladium. Her run was sadly cut short by a family emergency.

The new Sister Act will run at Eventim Apollo for 39 performances, from July to August next year.