The oldest known battlefield in Europe is in Northern Germany, and research suggests that the battle that occurred there happened more than 3,000 years ago.  The site is located along a mile and half long stretch of the Tollense Valley, following the banks of the river, and was something of a surprise to archaeologists, according to a report from Smithsonian.

People have been finding artifacts from the Bronze Age in that area since the 1990s, actual, methodical fieldwork didn’t start until around 2008, however. Over the course of the 11 years since, the true nature of the site became apparent.  Other discoveries in other locations had already told archaeologists that war was part of life during that period, but finding an actual battle site meant being able to learn much more about its scale.

So far, about 140 sets of remains have been discovered, all belonging to young men, and all showing signs of battle-related injuries.  Some of the bones still have arrowheads lodged in them.  Currently, scientists believe the entire site covers a larger area than they currently explored, and are estimating there likely around 2,000 men involved in the battle, based on what they’ve already found. 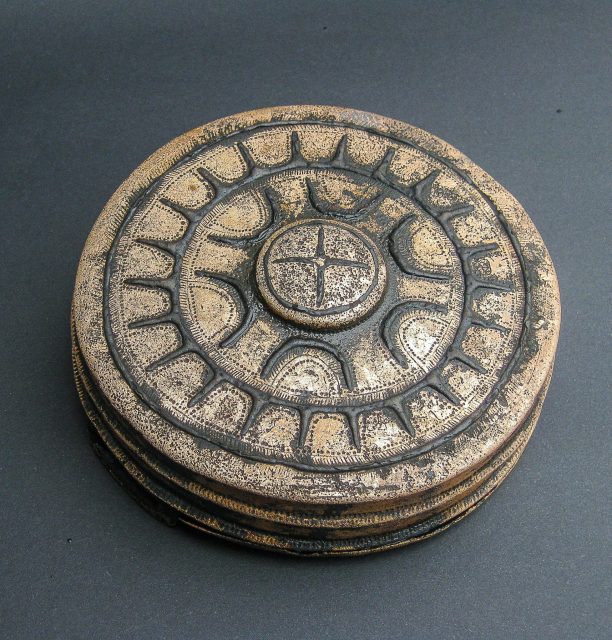 To further their understanding, they’ve begun excavating the bottom of the Tollense River to see if they could find out more.

One of the things that excavation uncovered was a bundle of personal items which belonged to one of the soldiers in the oldest battlefield in Europe.  The contents suggest that some of the combatants, including the one who owned the bundle, traveled hundreds of miles to reach the fight.  The researchers who made the discovery recently published a study about their findings in Antiquity. 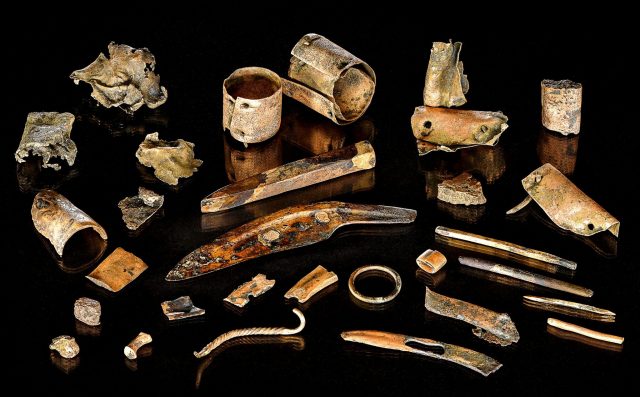 Thomas Terberger, one of the researchers, remarked that the find was part of a triple surprise.  They hadn’t expected to find a battlefield, nor did they expect to have it be as large as it seems to be.  They were also surprised to discover that the people involved came from across Europe.

Terberger’s team believes that the bundle they found in the river was probably originally contained in either a wooden box or a cloth bag, either of which would have rotted away long ago in the water.  The item the container held appear to be a toolkit.  There were scraps of copper and a variety of the types of tools that would have been useful on a daily basis, such as an awl, a knife, a chisel, and a small sword. 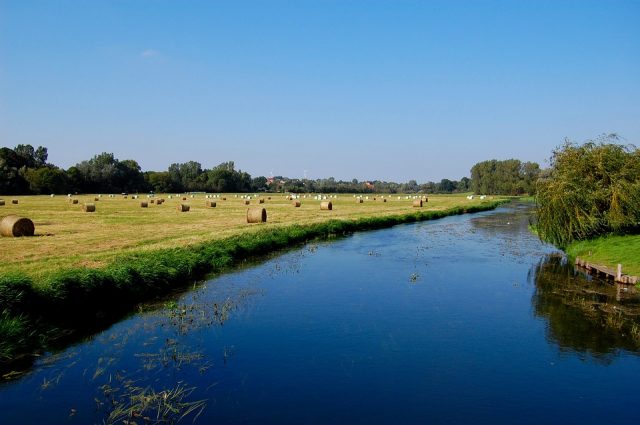 Such groups of items have been seen before in the burials of warriors across Central Europe, which is a far remove from Tollense.  The sword was of a type that common in Bavaria, but three bronze cylinders believed to have helped hold the container closed resemble similar items that used in France.

All in all, what they found suggests that the combatants came from the southern part of Central Europe.  That idea is reinforced by the results of a 2017 chemical analysis on some of the remains which have been found at the oldest battlefield in Europe.  The analysis revealed that, although the specific places of origin couldn’t be pinned down, it was still clear that the remains they analyzed weren’t local.

Terberger and his team are hypothesizing that the chisel was used to remove pieces from the copper scraps, which could then be used as a way of buying things.  He remarked that this was known to be an early type of currency during that period of time.

Barry Malloy, of University College Dublin, wasn’t part of the study, but is still in agreement with the notion that the scraps of copper probably constituted currency.  He said it made sense to him that a traveler who was far from home would be likely to carry portable wealth to cover his travel expenses.  He also said the copper could have been lost with everything else in the course of the battle, or could also have been intentionally put in the river as a type of offering.

Despite the fact that the Bronze Age was generally considered to be a pretty peaceful time, the cumulative discoveries at the Tollense site give solid evidence that large, mobile groups traveled significant distances in hostile areas.  In other words, they went to war.

While there isn’t any way to know what caused the conflict, the things which have been learned open the doors to all sort of other questions for further study, including things like what would prompt a foreign force to travel such a long distance, and how such things were organized and managed at a time when technology was pretty simple.

Since there’s so much of the oldest known battlefield in Europe in the Tollense Valley still to examine, maybe it will help answer some of those questions later.