Walking around central London, one of the last things you’d expect to bump into is a Roman sarcophagus. But that is exactly what happened one day. During Roman times, Southwark, a borough across the Thames from central London, was a bustling trade hub after Londinium was established about 50 AD, and it served as such for four hundred years.

In 2017, according to South London Press, an archeological dig performed before a housing development was built revealed an ancient road near Harper Road that had been a major thoroughfare for hundreds of years as evidenced through recuts of the ditches.

It is known that an area of land near the banks of the Thames was an important burial site. Just when the archeological team thought they were about finished, they uncovered a stone sarcophagus built into the side of a wall which may have been part of a mausoleum. The lid had been moved causing a large crack indicating a grave robbery, probably in the 18th century.

The plain stone coffin, which is about eight feet in length and weighs about two and a half tons, was believed to be from the third or fourth centuries, but at the time of discovery was filled with dirt because of the opened lid making it difficult to ascertain the contents, if any.

An ancient Roman sarcophagus has been excavated from a building site in central London https://t.co/R2Hisg8kX3 pic.twitter.com/L8CQUIuIxD

Next to the sarcophagus were a broken bracelet and the remains of an infant. According to Archaeology World, Gillian King, senior planner for archaeology at Southwark Council, assumed that the occupant must have been high up on the social scale and must have been wealthy to have ended up with such a prestigious burial.

Most burials would have been in a lead or wooden coffin if one was used at all. Only two other such burials have been found in the London area. In 2006, one was found at St Martin-in-the Fields, near Trafalgar Square, and another one from Spitalfields in 1999. 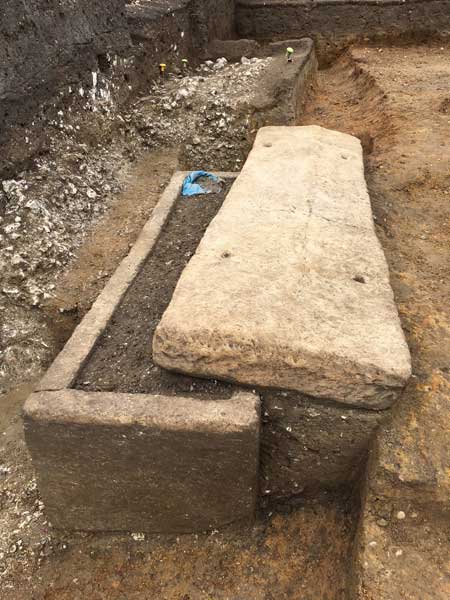 The most recent Roman sarcophagus to be discovered in London. Photo courtesy of the Museum of London.

Over several weeks, the structure was carefully dug out and moved to the Museum of London Archaeological Archive. Reported in South London Press, Jackie Keily, senior curator at the Museum of London, revealed the contents of the sarcophagus a year later.

The remains of a woman buried between 86 to 328 AD, a small piece of gold, most likely from a piece of jewelry she was wearing, and a small gemstone of intaglio, a carved piece of jasper usually worn in a ring. The jasper carbon dated much earlier than the burial date and is believed to have been an heirloom.

Excavations are going on all over Southwark. Exploring Southwark notes a very large Roman residence with baths heated from under the floor and walls with frescos painted on plaster from Italy was found under Winchester Palace which was built in the 12th century.

Southwark Cathedral was built over a Roman villa and another villa that opened out onto a piazza was found in Tabard Square. In 2011, during the upgrade of a rail line and London Bridge Station, Roman bath houses were discovered at London Bridge Road and Borough High Street.

In May of 2018, an exhibition was held at the Museum of London Docklands with the Southwark stone sarcophagus as the center point. Glass vessels with some traces of oil and others with cremated remains found in 1873 at Bishopsgate were included in the display as well as funerary urns from the 17th and 18th century found at Goodman’s Fields outside Aldgate and near Bishopsgate.

Related Article: Alexander Sarcophagus, one of the most remarkable examples of Hellenistic art ever found

Look Up London shows items from the show such as a tombstone with a Latin inscription, “To the spirits of the departed. Erected by Solinus to the memory of his beloved wife, Grata, the daughter of Dagobitus, aged 40 years”; a woman’s ring found on the hand of a young adult woman with an exquisite carving of little mice that is in practically mint condition; a glass mosaic bowl that would have been for someone wealthy from 200 to 300 A.D.; and iron noisemakers such as rattles and horns that would have been used during the burial service.