James Dean summed up what it meant to be young and alienated in 1950s America. Yet in spite of that iconic status he only made a handful of movies before his untimely end. The potential that was snatched away still haunts movie lovers, over half a century on.

He was born in Marion, Indiana, in 1931. His father was dental technician Winton. Mother Mildred Marie encouraged his talent for performing, and at age 6 the family relocated to the starrier climes of California.

Within the first few years of his life, James had learned tap dancing and was trying to master the violin at his mother’s insistence. The pair were reportedly very close. In reference to his musical teachings, he commented “If she hadn’t died, I’d probably be sawing away yet” (quoted from The Real James Dean Story magazine, 1956). Dean lost his mother to uterine cancer when he was aged just 9. 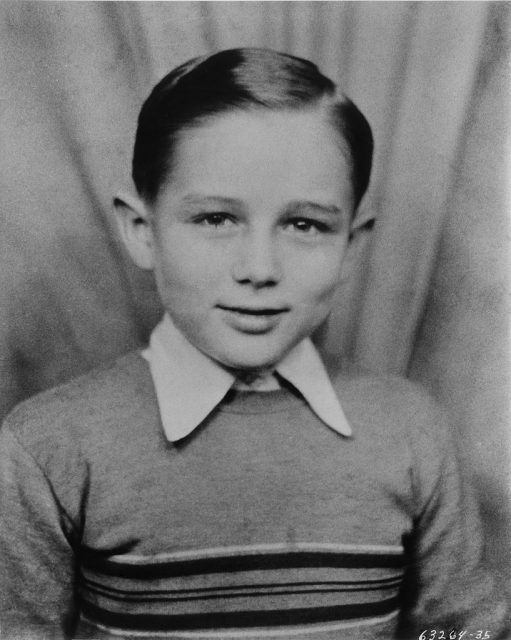 James Dean as a child circa 1938. (Photo by Michael Ochs Archives/Getty Images)

Winton then sent him to live with his uncle Marcus and aunt Ortense. They were Quakers living on a farm in Fairmount, Indiana. A formative figure was the Rev. James DeWeerd, a Methodist pastor, but it’s also alleged that abuse took place in their relationship. 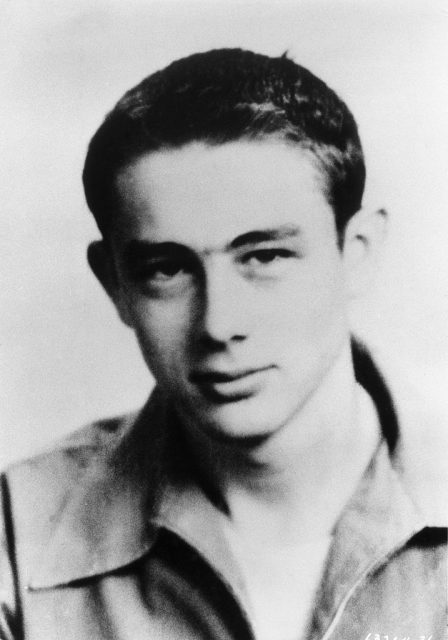 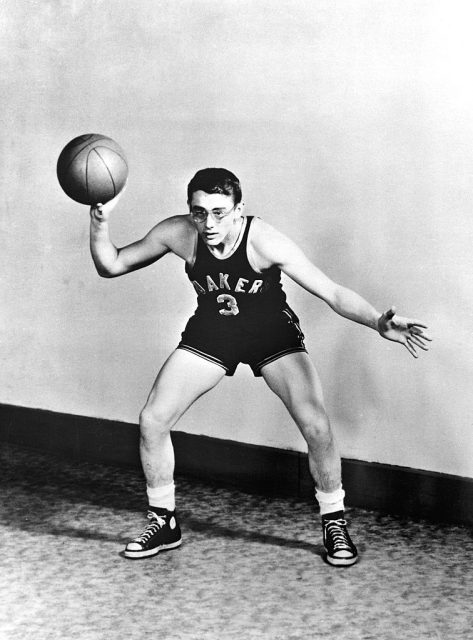 It became clear as he worked through college that the spotlight was his calling. After moving back in with Winton, he nearly entered the legal profession. But after transferring from Santa Monica College to UCLA (University of California, Los Angeles) he abandoned the idea of law school and embraced drama and the stage. His father was not impressed and they parted ways at that point. 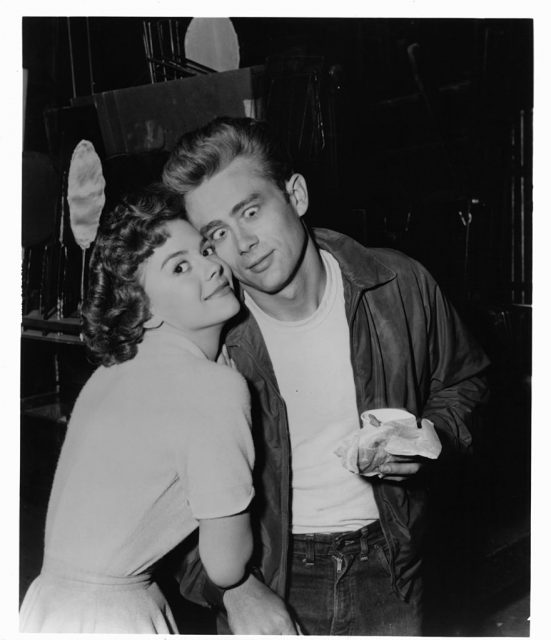 Natalie Wood and James Dean goofing off on set of the film ‘Rebel Without A Cause’, 1955. (Photo by Warner Brothers/Getty Images)

“To me, acting is the most logical way for a person with problems to express himself,” he said, quoted in The Real James Dean Story. “All of us have a great need to let it go in some way, and for me, acting is the only outlet.” 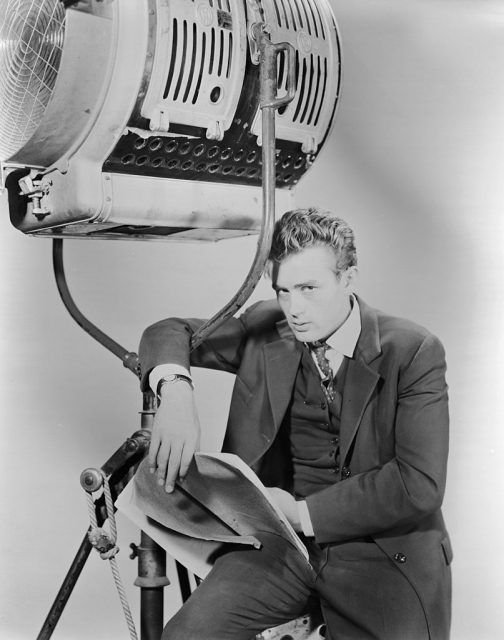 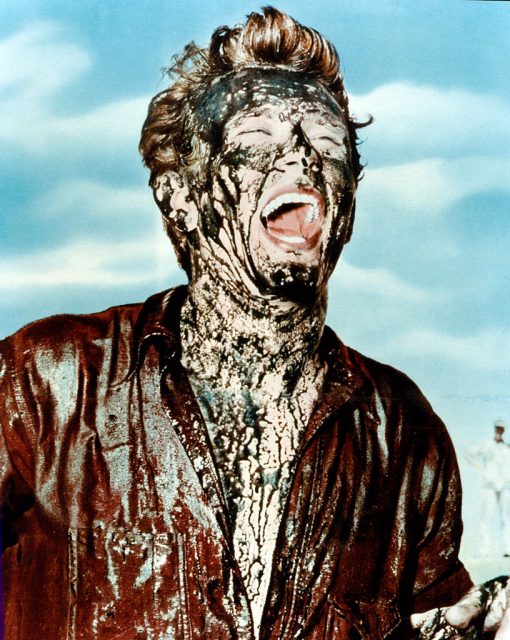 And what an outlet. After exposure through a Pepsi Cola ad and a TV appearance in Family Theater (where he played John the Beloved Disciple), he reached the bright lights of Hollywood. It wasn’t an instant route to fame – he once worked as a parking attendant at CBS to pay the bills – but his obvious abilities would be recognized soon enough.

Studying at the legendary Actors Studio under teacher Lee Strasberg took his talent to new heights. The man who reportedly molded Brando and Monroe had another gem to polish in the shape of Dean. Other notable players in Dean’s story include fellow actor James Whitmore, plus mentor Rogers Brackett. 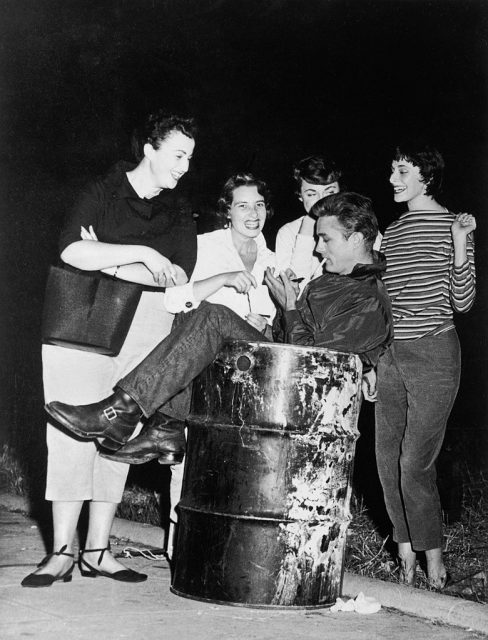 Dean signs autographs for a group of fans, while sitting in a trash can on the set of ‘Rebel Without a Cause’, California, April 1955. (Photo by Hulton Archive/Getty Images)

In 1953 he was cast in East Of Eden, the adaptation of John Steinbeck’s epic American novel. Cal Trask was another role for Dean with Biblical undertones. The character has been likened to Cain and was a complex part to cast for director Elia Kazan. 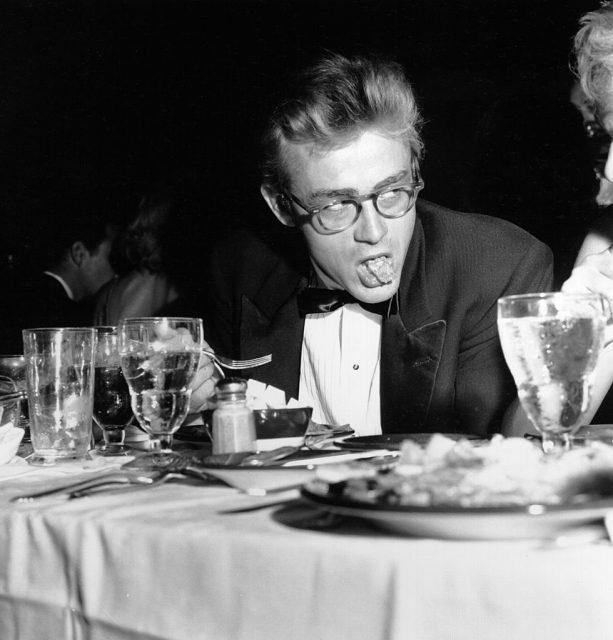 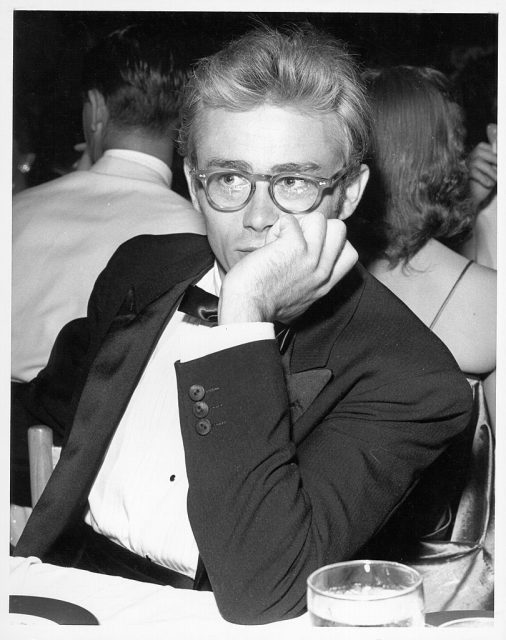 Kazan passed away in 2003. But in 2014 correspondence between him and Steinbeck was published, revealing his instincts about the young star. Kazan wrote, “He hasn’t Brando’s stature, but… has balls and eccentricity and a ‘real problem’ somewhere in his guts”. 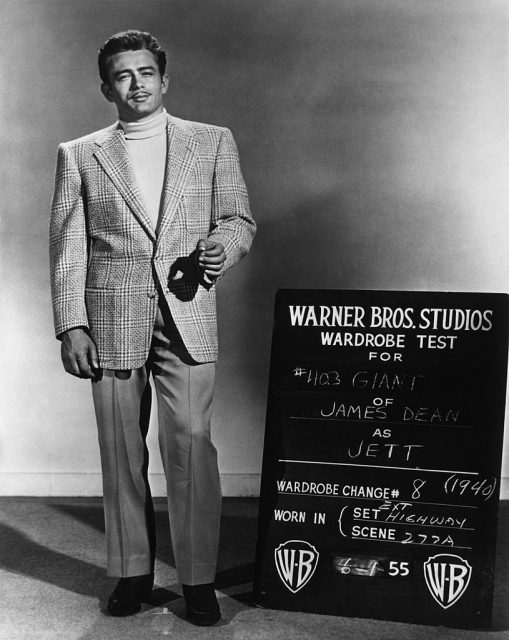 The helmer also described him as “a little bit of a bum, but he’s a real good actor and I think he’s the best of a poor field… Dean has got a real mean streak and a real sweet streak.” He also told wife Molly that “he takes to movies like it was his medium. Like he owned it”. 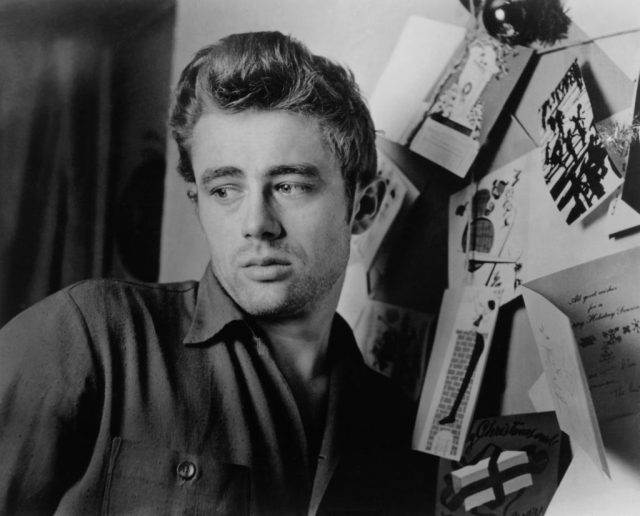 Dean further pushed the envelope by improvising throughout the picture. The seal of approval came from the author, who disliked Dean personally but admired his suitability for the role! 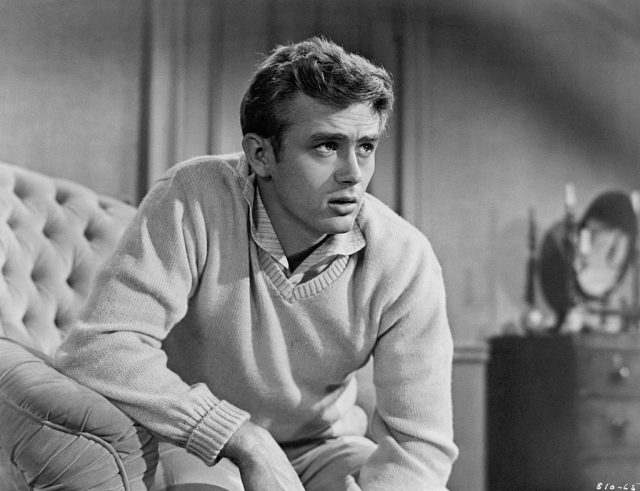 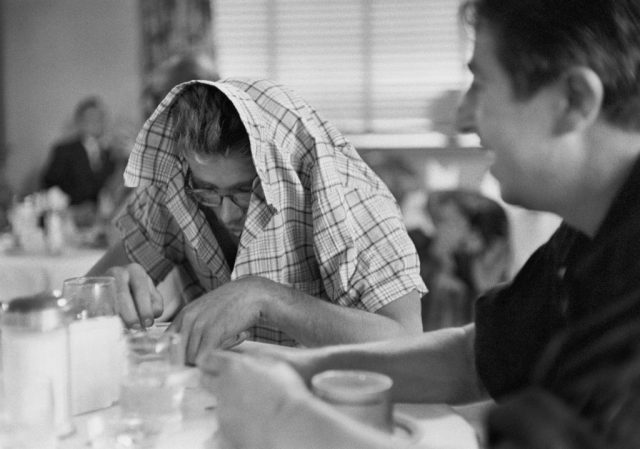 Dean eats lunch during the filming of the movie “Giant” in October 1955 in Marfa, Texas. (Photo by Richard C. Miller/Donaldson Collection/Getty Images)

While Dean may have been beneath Brando in the pecking order, he was cut from the same convention-breaking cloth. Just as the former had his leather-clad moment of mayhem in The Wild One (1953), so Dean would play another rebellious character in Rebel Without A Cause a couple of years later. Directed by Nicholas Ray and inspired by psychologist Robert M. Lindner’s book, it brought the realities of teen angst to the screen in a way never seen before. 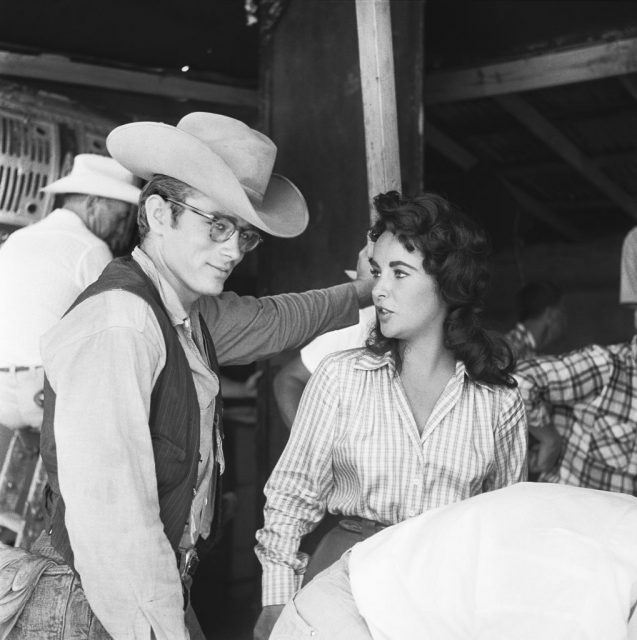 James Dean and actress Elizabeth Tayor on the set of the movie “Giant” in October 1955 in Marfa, Texas. (Photo by Richard C. Miller/Donaldson Collection/Getty Images) 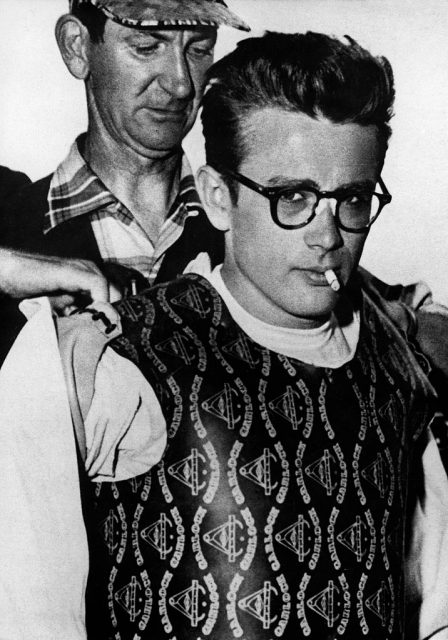 A Variety review mentioned Dean’s performance as the middle class yet wild Jim Stark, saying “the 24-year-old actor was widely thought to be doing a Marlon Brando. But freed from Kazan’s evaluations of character, this resemblance vanishes. Almost free of mannerisms under Ray’s pacing, Dean is very effective as a boy groping for adjustment to people… His actor’s capacity to get inside the skin of youthful pain, torment and bewilderment is not often encountered.” 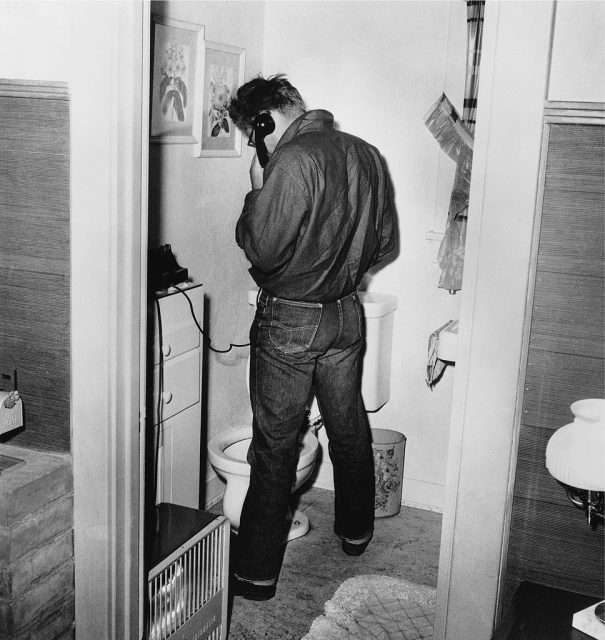 James Dean multi-tasking as he talks on the phone while urinating in 1954. (Photo by Frank Worth, Courtesy of Capital Art/Getty Images)

His career in Tinseltown was just getting started, but already Dean was restless. During an interview conducted during the filming of Rebel, he quipped how he was playing the role of someone with father issues again. The next project he boarded was different in tone, and proved to be his last. 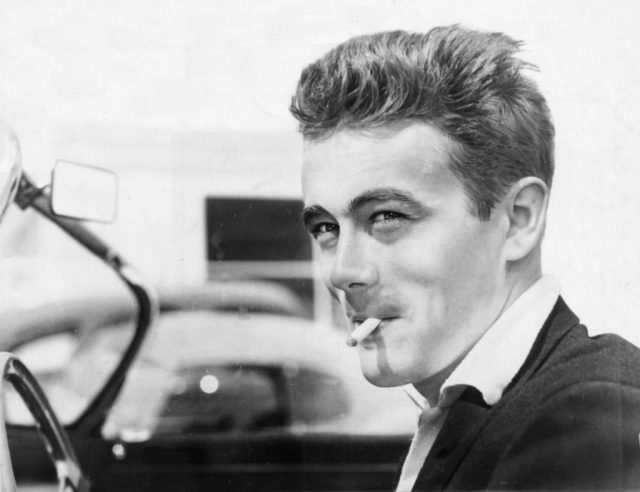 James Dean driving a convertible with the roof down. 1950s (Photo by Mondadori via Getty Images)

Giant (1956) was a Western which saw Dean play Jett Rink, a rancher who finds himself sitting on an oil fortune. Billed alongside Elizabeth Taylor and Rock Hudson, the movie was a change of pace for the young actor, who rated director George Stevens most highly.

“George Stevens, for my money, is the greatest director of them all – even greater than Kazan,” he said, as quoted in The Real James Dean Story. “He’s so real, so unassuming, and he doesn’t miss a thing. Also, we’ve got a wonderful script… when it wants to, Hollywood can accomplish tremendous things. And this movie might be one of them. I sure hope so.”

Sadly Dean never got to see how the film fared. Both Giant and Rebel Without A Cause were released following Dean’s fateful ride in his Porsche Spyder in September 1955. The driver of the Ford he crashed into, student Donald Turnupseed, escaped relatively unscathed. He’d turned left on an intersection in Cholame California, where Dean’s vehicle collided into him. 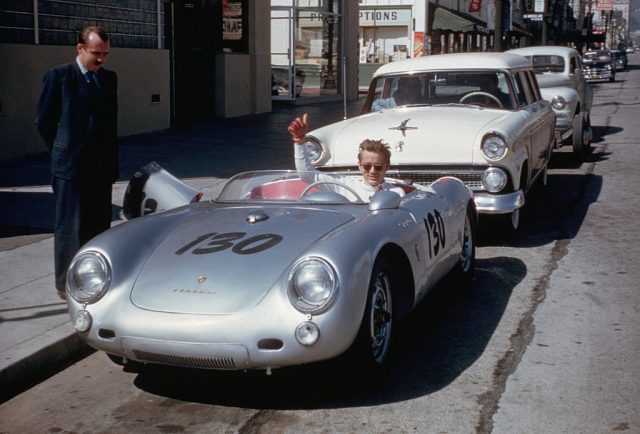 Dean in his Porsche 550 Spyder, while parked on Vine Street in Hollywood. Dean, who had taken up racing the year before, owned the car only nine days when he lost his life in a highway accident while driving the Porsche to a Salinas race. Getty Images

Dean had been on his way to a race, and the verdict apportioned blame to the actor. In 2005, the Telegraph reported the findings of a documentary that claimed “Dean, contrary to what was said at the inquest, was travelling at just over 70mph, up to 20mph slower than was claimed. It reveals that Dean braked hard, trying to avoid the car that cut across him, rather than using the throttle to accelerate around it, as was alleged at the time.” 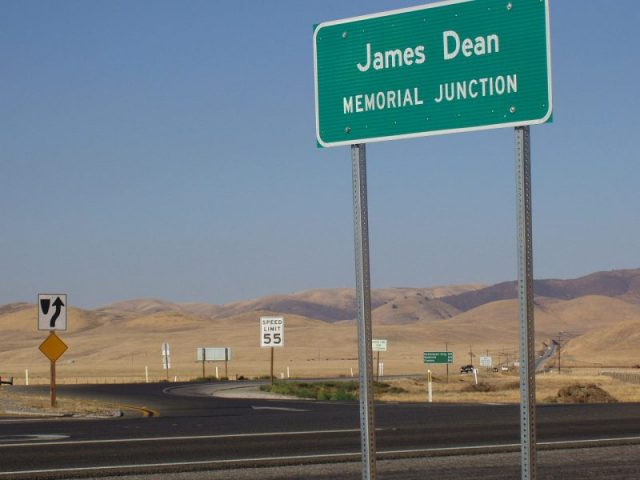 Nevertheless, History.com concludes “the gathering twilight and the glare from the setting sun would have made it impossible for Turnupseed to see the Porsche coming no matter how fast it was going.”

Dean was posthumously Oscar-nominated for both East Of Eden and Giant, winning a Golden Globe for the former. And his legacy is being examined again, thanks to a controversial new film that resurrects him with CGI. 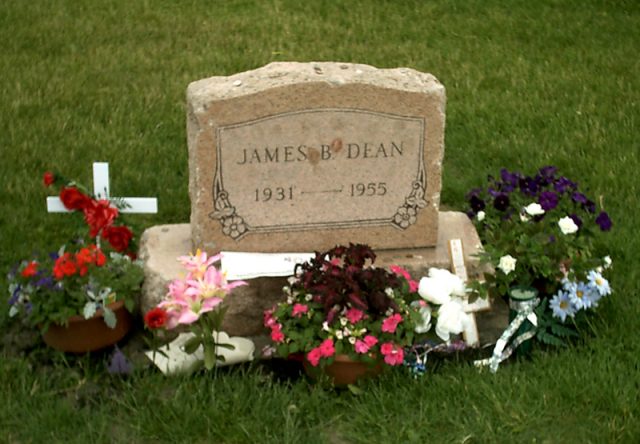 Finding Jack “casts” a CGI-created Dean as Rogan, a main character involved in the aftermath of the Vietnam War. The filmmakers have the family’s blessing, yet some see it as virtual grave robbing. Captain America himself (Chris Evans) poured scorn on the idea, commenting on Twitter: “Maybe we can get a computer to paint us a new Picasso”. Producers claim they’re making a valid artistic decision.

Related Article: James Dean Got a Speeding Ticket 2 Hours Before his Fatal Crash

At the very least it could introduce the star to a new audience. But can a man whose internal workings were a mystery to millions be recreated by a machine? The move has certainly kept James Dean in the national consciousness, decades after his untimely demise.

« Battle-Hardened Face of 1,000-yr-old Viking Warrior Woman Unveiled
Man Buys Vase in Thrift Shop for $1 then Sells it for Half a Million »