Discovery of Prehistoric Ape that Walked Upright Changes Everything

The bones of an ape millions of years old that could walk upright has experts excited about the possibility of finally finding the missing link between ancient apes and humans. In 1871 Charles Darwin published his theory of evolution for the origins of humans. Although it was somewhat poorly received at the time, Descent of Man has become the standard on what we understand about human evolution.

According to Darwin, humans evolved from apes unable to function upright gradually through today’s human over millions of years but was unable to forensically prove his theory.  When Dr. Madelaine Böhme, a German paleontologist and professor of paleoclimatology at the University of Tübingen in Baden-Württemberg, Germany found bones and part of a skeleton of ancient apes recently at the Hammerschmiede clay pit in the mountainous Allgäu region of Bavaria in southern Germany she knew she had stumbled upon a possible answer.

She called Dr. David Begun from the Department of Anthropology, University of Toronto in Canada who had been a fierce advocate for Darwin’s claims. The bones he was presented with changed his mind. They turned out to be bones of four different apes all over eleven million years old who lived during the Miocene epoch from about twenty three million years ago to five million years ago. 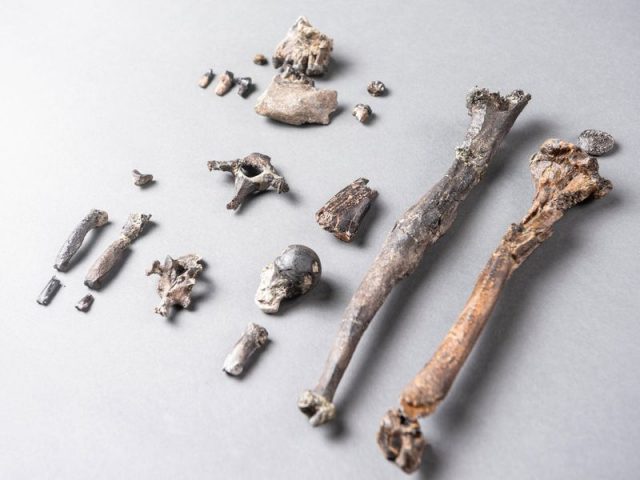 The partial skeleton was the one that allowed researchers to discover how the subject functioned in relation to its body size.  The new fossils were attributed to a previously unknown primate they named Danuvius guggenmosi, that swung through the trees but had a spine, legs, knees and hips that indicated the ability to bear weight and, remarkably, the tendency to walk upright using its legs to move about. 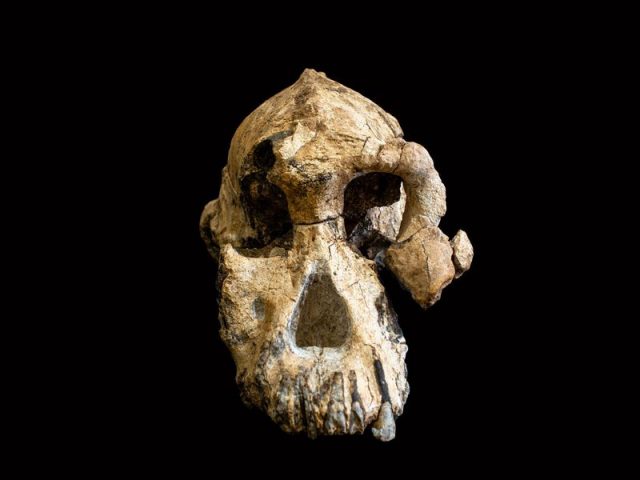 The remarkably intact skull of an early human ancestor of the genus Australopithecus fills in some of the gaps in the human evolution. (Dale Omori / Cleveland Museum of Natural History)

There was even a curved toe that would have helped with flat footed motion on tree branches by using it to grasp the branch.  According to the research article published on nature.com by Böhme, Begun and their colleagues, these early ancestors had the arm length and strength to travel using both their arms and their legs leading to the hypothesis that Danuvius guggenmosi may be the common ancestor of humans and apes – the missing link that has eluded science for so long. 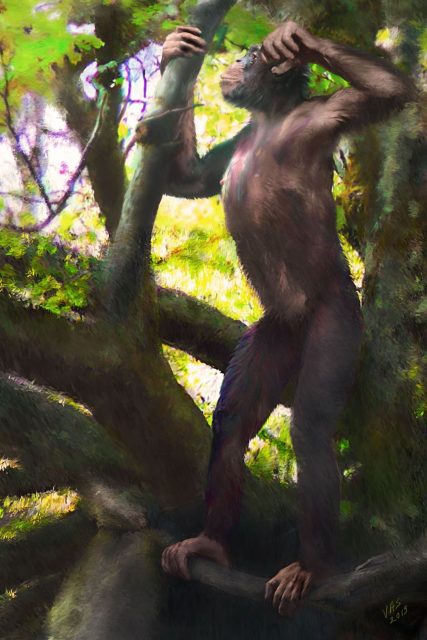 An illustration of Danuvius guggenmosi, supporting itself with both its forelimbs and hindlimbs. (Velizar Simeonovski)

According to smithsonianmag.com, Begun remarked, “Here, we have something that doesn’t exist today, it’s totally new and different, and you couldn’t imagine it. It would have been silly to even suggest it unless you found fossils that told you that there was an animal like this.”

The fact that these ancient apes lived in Germany also shatters assumptions that all ancient hominids were located in Africa.  For an as yet unknown reason, Danuvius guggenmosi went extinct after only existing a few million years and according to existing fossils, it was a few more millennia until early humans developed. So far, the time in between has not produced any tangible artifacts. While Danuvius guggenmosi may answer a few questions about mankind’s evolution it is probably going to create many more.

There are different opinions on whether humans evolved from apes that lived in the trees and used their arms to travel from tree to tree or those who lived mainly on the forest floor using the trees only for sleep and food and using their knuckles to walk somewhat like a person on crutches.

Nature.com tells us Darwin looked for the first bipedal ancestors using the differences between modern primates who used their knuckles to walk such as chimpanzees and bonobos with whom we share over 98% of the human genome and orangutans who rarely come to the ground, living almost exclusively in the trees.

The top down approach, as it is called, may not allow for any evolutionary changes that may have occurred.  The bottom up approach, a research method preferred by Böhme, starts with fossils that date to the time before humans and works its way to when humans existed.  Böhme is hoping Danuvius guggenmosi will fill some of that space and even turn out to be that elusive missing link.

« What was on the Menu at the Very First Thanksgiving?
Groovy Color Images of Hippies at Woodstock 1969 put you Right There in the Mud »