What was on the Menu at the Very First Thanksgiving?

When people think about their Thanksgiving feasts, there are usually some pretty specific things that they prepare every year. For many people in the US, Thanksgiving involves turkey and some sort of stuffing.  If you have southern roots, the stuffing is probably cornbread-based.  If you’re from somewhere farther north, it may use regular bread and include fruit, nuts, or sausage.

Many people make mashed potatoes, candied yams, or macaroni and cheese for sides.  Cranberry sauce, green beans or peas, bread rolls, and of course everything has to be drenched in turkey-based brown gravy! For dessert, many people have pie, usually pumpkin, but apple, pecan and sweet potato are also Thanksgiving favorites. 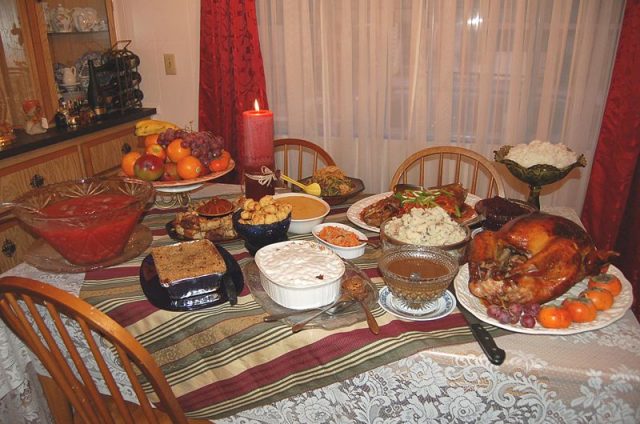 A classic Thanksgiving spread. Photo by Ms Jones CC by 2.0

Given the broad consistency of the holiday menu, it can appear that the dishes we eat now are the same dishes that have always been popular for Thanksgiving, going back to the very first meal the pilgrims and the native people shared back in 1621, but a report from Smithsonian says otherwise.

A couple of documents still exist that were written by people who were at the first Thanksgiving and talk about the meal.

There was, of course, a substantial amount of meat.  In 1621 the area around the Plymouth Colony was rich in wildlife of various sorts, so the hunters bagged a great deal of waterfowl, deer, and, of course, wild turkeys.  Research suggest, however, that the turkey wasn’t the star of the show.  It’s much more likely that the preferred meats were waterfowl, suck as goose or duck. 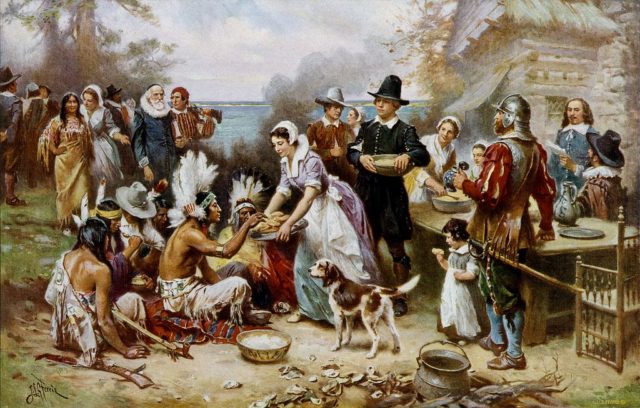 There’s reason to believe that swan and even passenger pigeons may also have been plentiful. Since there were no modern ovens in the 17th century, the smaller birds were most likely spit-roasted, while the larger ones would be boiled. One cooking technique at the time involved first using one method, then switching to the other.  Given that the colony was on the coast, the meal probably also included seafood like shellfish or eels.

A lot of the rest of the menu would have included the produce that was growing at the time.  Epicurious suggests that would have included things like root vegetables, including onions, garlic, parsnips and carrots. Fruits like plums, melons, grapes, and of course, cranberries would also have been available, as well as nuts.  Gourds like squash and pumpkin would also have been available, and herbs like thyme, rosemary, and sage. 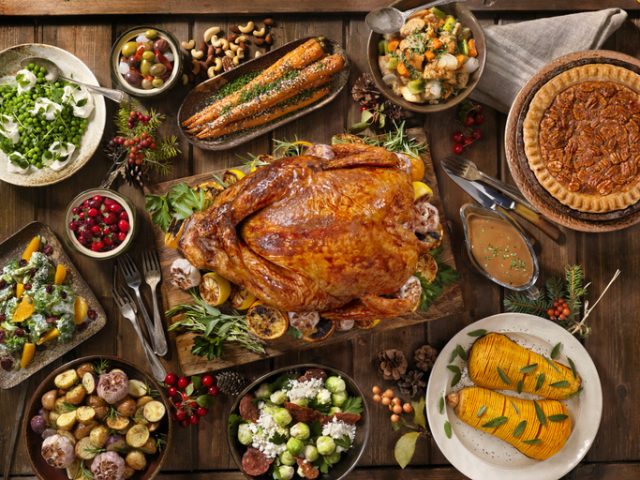 Beverage-wise, everyone most likely just drank water.  The colonists had planted barley, which means they may have used some to brew beer, but brewing is a process that takes some time – perhaps more time than they had.  Wine wasn’t unheard of, and some of those colonists may have brought some with them from Europe.  Eventually, there would be cider, but during the first Thanksgiving there weren’t any apple crops yet.

The sources that do reference the menu at the first Thanksgiving are pretty sketchy on the details, though, which means that historians have to do a certain amount of educated guesswork.  Kathleen Curtin is a historian who specializes in food, and works at Plymoth Plantation, a living history museum in Massachusetts.  She’s done a lot of research about how the original colonists ate, using everything from cookbooks from that era to what was shown in the paintings of the time and archaeological evidence.

She pointed out that a lot of the foods we consider traditional now weren’t around until after 1700, nearly a century after the first, famous feast.  In fact, it’s probably easier to work out what wasn’t served than the reverse.

Neither white nor sweet potatoes would have been on the Pilgrims’ table.  Neither would sweet corn, although cornbread or other dishes made with cornmeal might have been.  Bread-based stuffing would also have been absent.  If any birds were stuffed, it would have been with things like herbs and nuts.  There wasn’t a lot of butter or wheat flour readily available, either, which means that there wouldn’t have been the pies that are a treasured end to the Thanksgiving meal in modern times.

It’s also worth considering that the first Thanksgiving was a three-day feast, held in an era as lacking in refrigeration as it was in stoves.  Even though there was a widely diverse diet available, much of it was hard to store for extended periods and food, in general, was precious commodity never to be wasted.  As a result, cooks got very good at making the optimal use of what they had on hand.  As a result, the remains and bones of yesterday’s roasts would no doubt have reappeared today in the form of soups, stews, or even mixed with grain in the form of porridges.

The menu may have undergone some extensive changes in the nearly 400 years since the Pilgrims and the natives first sat down together, but the spirit of gratitude and the sharing of one’s bounty remains unchanged.