A Viking ship has been found underneath a field in a quiet working farm. Researchers in Norway recently found what they hope is a trove of Viking artifacts, including an ancient burial ship discovered in a farmer’s field. An aerial photograph taken by archaeologists at NIKU and recently published in the online scientific journal arstechnica shows the precise location where the ship was found, near Edoy, a town in western Norway.

A team from the Norway Institute For Cultural Heritage Research (NIKU), led by team leader Manual Gabler and archaeologist Dag-Oyvind Solem, practically stumbled on the site by pure chance. The discovered ship has been labeled the Edoy Ship.

It was not part of the area the team was initially surveying, Solem said. “We had actually finished (surveying) the agreed-upon area, but we had time to spare and decided to do a quick survey over another field. It turned out to be a very good decision,” he told arstechnica. 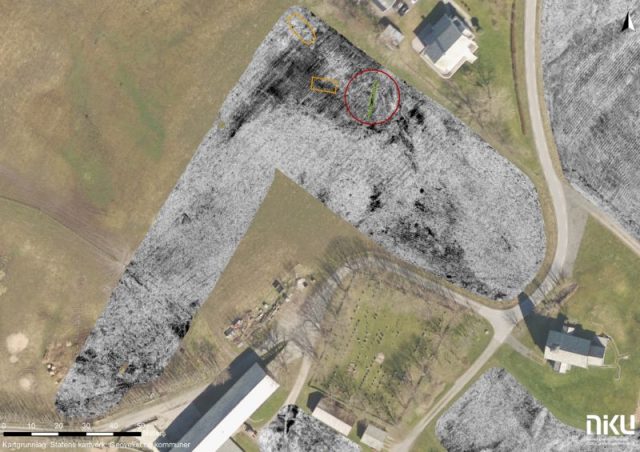 The Edoy ship found next a Norwegian farm. Photo by Manuel Gabler / NIKU

Excavation of the Viking ship has not even begun at the farm, as the team is still gathering radar images to fully understand its boundaries, so Solem can only guess at the finds that await the team. But they do know a ship rests there, likely containing the remains of a powerful, and powerfully important, Norse leader. Radar has also shown the outlines of two longhouses buried nearby. Solem is convinced exploring the site will lead to new knowledge about ancient Viking burial practices.

The outline of the ship can be seen clearly in the radar images, encircled by the remains of ditches that at one time surrounded the burial mound. “This is a very common trait for grave mounds,” Solem said. “In addition to having a potentially symbolic meaning, it is thought that [ditches] have the very practical function of making the mounds seem bigger than they really were.” 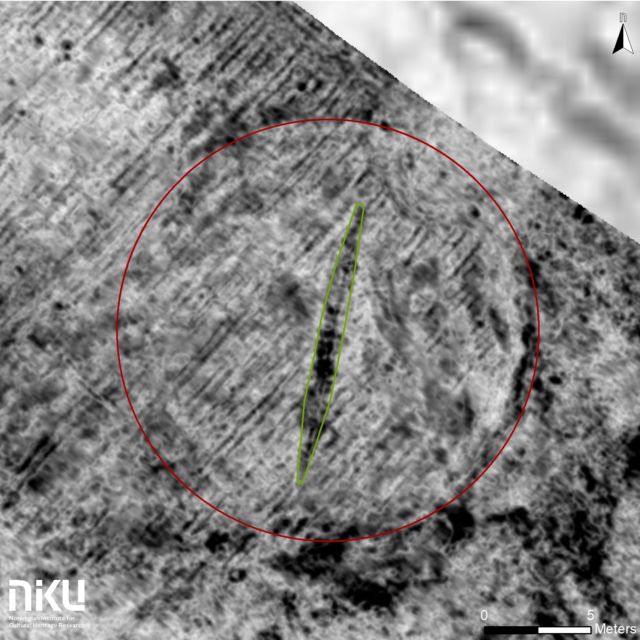 Enlarged radar image shows the buried ship surrounded by the remains of a ditch. Photo by Manuel Gabler / NIKU

Fortunately for the institute, the gentleman who owns the land is agreeable to letting archaeologists dig up his acreage. The farmer, Per Hassle, was caught off guard when experts told him what lies beneath his plowed field, but soon co-operated fully with plans the archaeologists set forth. “The burial is indeed located on a working farm,” Solem explained, “but we couldn’t have wished for a more agreeable landowner. He is very interested in history, especially local history, and is very enthusiastic about the project.”

And just what will the project reveal? That’s impossible to say just yet, as it is still in its infancy. But Solem is hopeful there will be found, in addition to the remains of someone buried on the ship, other artifacts from the Viking period. There may be swords and other weapons; jewelry and other finery — all objects that were frequently buried with important men back in the days of the Vikings.

Solem estimates that the site is likely 1,000 years old; he told the website, “what we can say is that this kind of house usually dates to the pre-Christian period in Norway. In some cases, houses have been found with burial sites that have been interpreted as ‘death houses’ — that is, houses that were probably connected to the cult of the dead.”

The team hopes to begin gingerly exploring the site by digging a trench that will not harm or damage the ship and the remains, but Solem can’t say for sure when or even if the dig will start.

“To be frank,” he said, “we don’t know whether the find will be fully excavated or even left fully alone.” That may be a matter of funding for the dig, or political and cultural will; many factors come into play in a project of this magnitude.

However, one thing is certain: the Viking burial ship remains at Edoy farm will surely teach archaeologists a great deal about Norway’s history, when the time does come for scientists and other researchers to uncover it.