Amazon is in hot water for wildly inappropriate Auschwitz Christmas ornaments sold on its site for the holiday season. When one thinks of decorations to hang on the Christmas tree, devices needed to open bottles, keepsake key chains, or even pads to slide your mouse upon, the Auschwitz concentration camp is probably one of the last things that come to mind. However, those depictions on those products are exactly what happened and what has caused so much controversy. 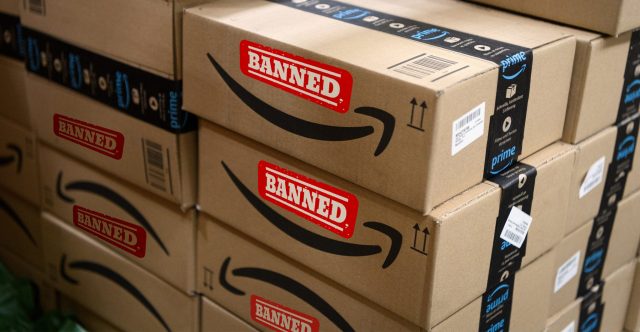 Amazon will not be delivering these products.

The day before Cyber Monday, Amazon’s largest shopping event of the year, the company faced extreme backlash over these items for sale on its site which were deemed to be offensive from many groups. Due to a complaint from Auschwitz Memorial, which curates the Auschwitz Museum, Amazon has removed Christmas ornaments, a bottle opener and other items that depict scenes from the camp.

The Memorial site on Twitter claimed that selling Christmas ornaments and bottle openers with images of Auschwitz was inappropriate, disturbing and disrespectful and asked for those items to be removed from their stock.

Selling “Christmas ornaments” with images of Auschwitz does not seem appropriate. Auschwitz on a bottle opener is rather disturbing and disrespectful. We ask @amazon to remove the items of those suppliers. https://t.co/0uG2JG558e pic.twitter.com/ucZoTWPk1W

Not only that, Wired reports that Hqiyaols Ornaments, the maker of the ornaments, sold keychains with photos of Auschwitz advertised for couples for Valentines Day on the Amazon platform. The keychain portrays two rings each with a charm holding a picture of the camp held together by a heart and the words “I Love You” written across it. Not terribly romantic. Another online seller, FCheng, was also selling the items in question and in almost all cases the goods both companies were selling had no reviews or ratings.

Additionally, the company was selling a mouse pad with a long shot of the camp and an ornament depicting the freight car used to transport people there, according to NBC News. Daily News notes that Amazon also removed a beach towel with an image of Auschwitz and the words, “Arbeit Macht Frei” – work sets you free – a slogan that hung at the entrance to the camp after tweets from the Memorial site.

The story continuous. We start getting an impression that people took upon themselves the job that someone at @amazon should be doing: verifying the products that are uploaded there. Here is an “Arbeit macht frei” bath-beach-pool-gym towel. https://t.co/VD4uXikjpl https://t.co/DF4rChxIiV pic.twitter.com/NS9kROWIFp

Amazon claims these items are from third party sellers, and, according to CNN, a spokesperson stated that “All sellers must follow our selling guidelines and those who do not will be subject to action, including potential removal of their account. The products in question have been removed.” Amazon does not manually check the wares of third party sellers and waits until complaints are made before taking any action.

It’s not just Amazon either. AP News reported that Australian e-commerce website, Redbubble, advertised items for sale with the same images. Redbubble also removed the items in question after the controversy erupted. As well the company Wish, another ecommerce platform, was also selling the Christmas tree ornaments with pictures of the camp. A spokesperson for Wish apologized for the items, and said that it does its “best to monitor the listings that are uploaded by sellers who use our platform.” They have removed the products as well.

“Christmas ornaments” with images from Auschwitz are also available on @WishShopping. We hope that their reaction will be similar to #Amazon and such project will be quickly removed too. https://t.co/a8dynuU6ji pic.twitter.com/mcWCbA5B4g

James Thomson, a former employee for Amazon and currently a partner at Buy Box Experts, a consultancy firm that works with Amazon sellers, says Amazon does do some automatic screening before items go up for sale on the site. “If you have certain words in your listings, Amazon will find them right away,” he says. But artificial intelligence is used in most of these cases and oftentimes humans don’t manually review each product, and plenty of items that go against Amazon’s policies can fall through the cracks.

At the current time, Amazon’s seller’s policy is mostly reactive rather than proactive and appears to deal directly with products not including books, videos, and music. Current policy information can be found on Amazon Seller Central pages.