This is the bizarre and brilliant story of the creator of The Twilight Zone. In the days of black and white TV, one man threw a curveball so great it came out the screen and went round the back of the viewer’s head. That man was Rod Serling.

What inspired him to create one of the best-loved, most-feared shows of all time… The Twilight Zone? The answer lies in his harrowing wartime experiences, combined with his playful sense of humor. How better to begin than by quoting the intro to that legendary TV program…

“It is a dimension as vast as space and as timeless as infinity. It is the middle ground between light and shadow, between science and superstition, and it lies between the pit of man’s fears and the summit of his knowledge. This is the dimension of imagination. It is an area which we call the Twilight Zone.” 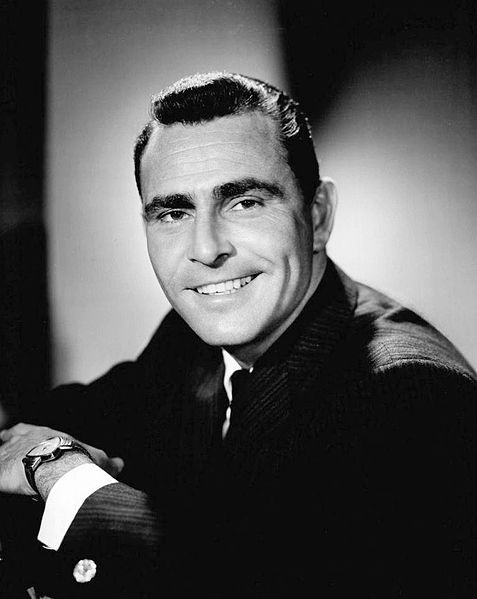 Rod Serling, writer and narrator of the Twilight Zone.

Serling delivered those words himself, dressed in a suit and tie and looking for all the world like one of Death’s minions. Through the gateway of his and other writers’ imaginations the audience went anywhere and everywhere, from thousands of feet in the air to the irradiated ground of a nuclear future. 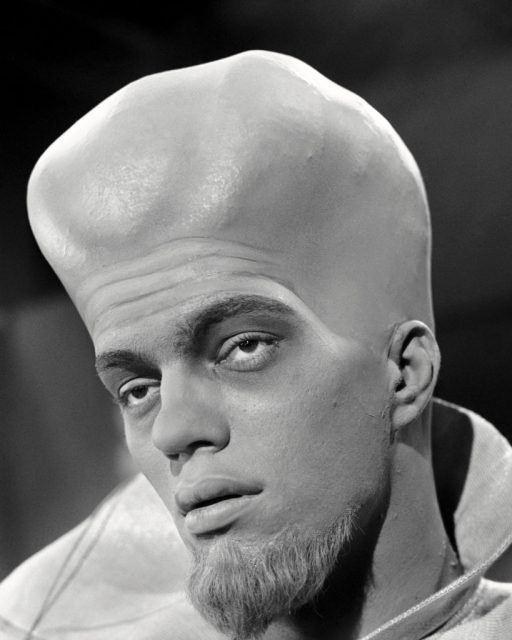 Richard Kiel as the alien Kanamit in ‘To Serve Man’, an episode in the TV series ‘The Twilight Zone, 1962. (Photo by Silver Screen Collection/Getty Images)

Coming back to the real world, Serling was born in 1924 to parents Sam and Esther. Sam was a grocer, though had a background as an amateur inventor. Esther looked after the family home in Syracuse, New York. Young Rod’s interest in performance and drama was obvious, but when he reached college age the budding creative decided to enlist. Hitler was on the horizon and he wanted to play his part in defeating him.

The experience of combat took a serious toll on Serling as he fought as a paratrooper in the Philippines. “You can’t imagine what he saw,” said TV critic Mark Dawidziak, speaking to Inside Edition. “It was so awful… those experiences shaped him for the rest of his life, they shaped him as a man and as a writer.” 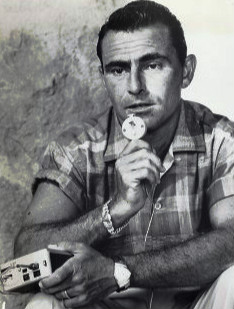 Rod Serling working on a script with a dictating machine in 1959.

Serling moved into writing for radio and then TV in the late Forties and Fifties. Underpinning his work was a strong sense of decency and humanity. He “really was on the side of the little guy… when he saw injustice he was going to speak about it,” commented author Nick Parisi. “How we treat older people, how we treat children, ignorance, prejudice, war. All of these are themes which recur in Rod’s work time and time again.” Rod’s daughter Anne also remarked that for Dad, “it was a writer’s job to menace the public’s conscience.”

Despite being a double Emmy Award winner, Serling’s themes didn’t sit well with the network top brass. The Twilight Zone was his response to their censorship, exploring issues in a less noticeable way via sci-fi, fantasy and horror. 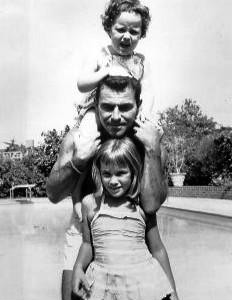 Serling with his daughters, 1959

“He was telling adult stories,” said writer/director Frank Darabont (The Shawshank Redemption), talking to Deadline. He added “this was at the time when television was not really that adult… to have something that was really smart… and dared to have that moral compass in the storytelling was so refreshing. Even as a kid I appreciated how smart and adult that was, and what a sneaky triumph that was for him.”

It began with a pilot called The Time Element (1958), a story about a man who has vivid nightmares of being at Pearl Harbor. Is he dreaming, or is he actually there, traveling in time somehow through his subconscious? 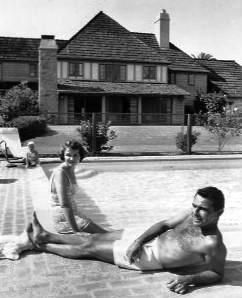 Serling with his wife Carol in 1959

For Serling, the idea of time travel had a personal resonance. “I’m the kind of a guy who is now in that ageing late 30, early 40 bracket,” he explained in a 1963 interview, “in which suddenly there is a tremendous bittersweet poignant feeling about wanting to go back to another time. In my case it would be the pre-war, early teens time which were particularly happy for me.”

The Twilight Zone explored Sterling’s preoccupations and those of others writers, such as Richard Matheson (I Am Legend) and George Clayton Johnson (Logan’s Run). Many episodes were written by Rod himself and Ida Lupino was among the show’s directors. 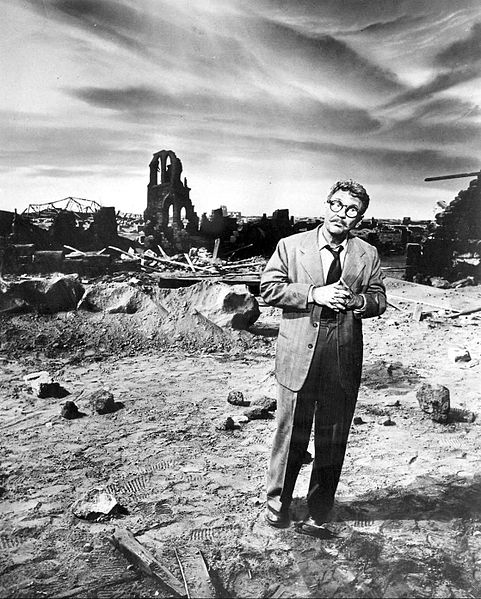 Classics from the original 1959 – 64 run include Time Enough at Last, starring Burgess Meredith. Based on a story by Lynn Venables, it’s about a bank teller who is spared a nuclear blast through being in the vault. Exploring the fallout from radioactive warfare, the narrative concerns human dependence on technology. Meredith’s character winds up pleased about the situation because he can finally indulge in his much-maligned passion for reading. Unfortunately for him he needs glasses to see straight, and in a typical Twilight Zone twist he breaks them at the end of the episode. 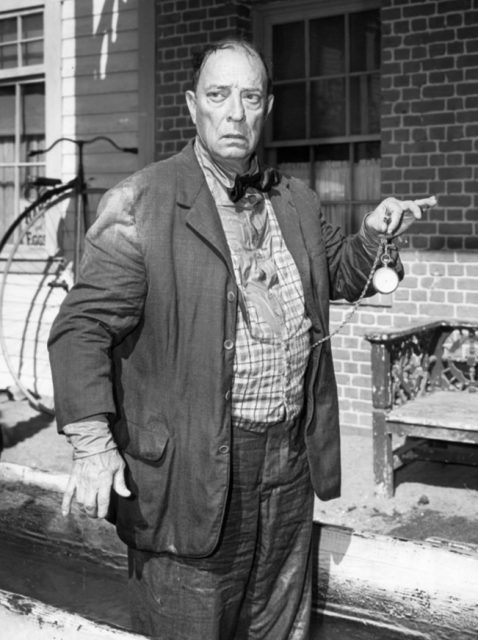 Buster Keaton in the 1961 episode of The Twilight Zone “Once Upon a Time”, where Keaton played a man who was able to travel back and forth in time with a magical helmet.

The Monsters Are Due on Maple Street (starring Claude Akins) took a tense look at Cold War paranoia, and Five Characters in Search of an Exit (directed by Lamont Johnson and starring William Windom) introduced the chilling scenario of immortal people trapped in limbo.

Serling was forever associated with the infamous Zone, though he did other things after it went off air. His supernatural anthology series Night Gallery is seen as a follow up, broadcast between 1969 and 1973. After a lifetime of activism and art he sadly passed away after open heart surgery in 1975 aged just 50. 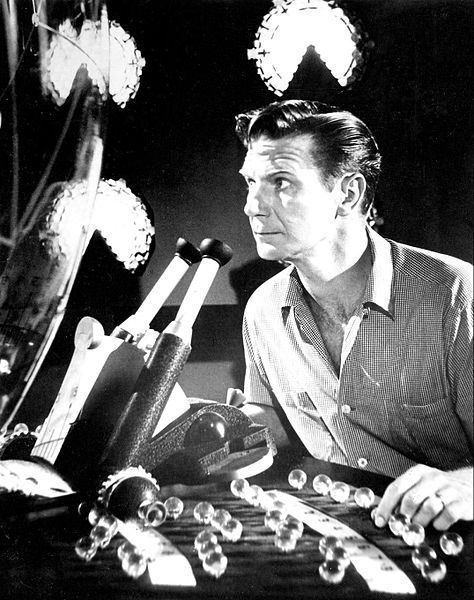 Joe Maross in the 1959 Twilight Zone episode Third From the Sun.

He may have had a reputation for unsettling his audience, but Rod’s family knew him as the opposite. “He was brilliantly funny, a practical joker, anything for a laugh… literally the guy who would put the lampshade on his head at the party,” said Anne, quoted by Inside Edition.

A movie was made in 1983. Directed by Steven Spielberg, John Landis, Joe Dante and George Miller. Burgess Meredith returned, this time as narrator.

It also featured a remake of episode Nightmare At 20,000 Feet, with John Lithgow taking the role originally played by William Shatner. The script was about the fear of flying taken to extremes. Serling once revealed he and his wife flew separately so as to minimize the impact of a potential crash.

While he worried that his work might disappear into the mists of time, Serling’s Twilight Zone keeps returning to loom large in the national consciousness. It’s been revived no less than 3 times – once between 1985 – 89 (with the Grateful Dead providing the theme tune!), a single season in 2002 with Forest Whitaker hosting and finally Get Out creator Jordan Peele’s current version for CBS All Access, which has been a success.

Related Article: You are Again in the Twilight Zone – New Reboot Setting its Sights Pretty High

With 2019 marking the the 60th anniversary of The Twilight Zone, viewers are as enthused as ever about Serling’s vision. “Few shows plant a flag in the public imagination the way The Twilight Zone did,” writes Deadline. “Its name, its theme music, and many of its characters (including monotone narrator Serling) became part of the American lexicon.”