Santa Claus is famous for flying in a sleigh coming down the chimney. But what does he do in a lighthouse? New England holds the answer with its long-standing festive tradition of the ‘Flying Santa’, which celebrates its 90th anniversary this year.

The Flying Santa brings Christmas cheer to lifesavers and their families, who live in remote areas performing the toughest tasks. “In the era before automation and GPS,” Smithsonian.com writes, “that job was extremely important in making sure the light was beaming and fog horn blaring so ships steered clear of dangerous shoals, rocks and other nautical obstacles.”

Instead of a reindeer-powered sleigh, the bearded and benevolent one flew a plane to deliver the Yuletide treats – though in recent times he’s piloted a helicopter. Over one hundred individuals have had heart warming annual visits from this truly special guest. And it all started with one man, Captain William Wincapaw. 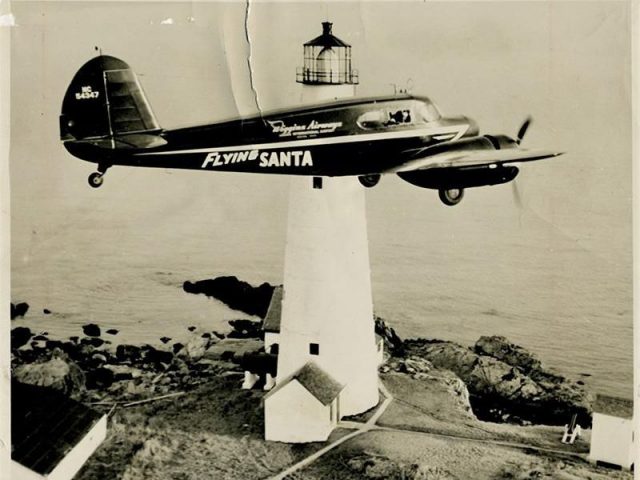 Wincapaw was a pilot from Maine, who lived in the appropriately-named town of Friendship, Knox County. The Friends of Flying Santa have been organizing and raising funds for the Flying Santas scheme since 1997. Their website describes the Captain as a pioneer of aviation, whose stomping/flying ground was Penobscot Bay, a collection of islands where lighthouses are essential. 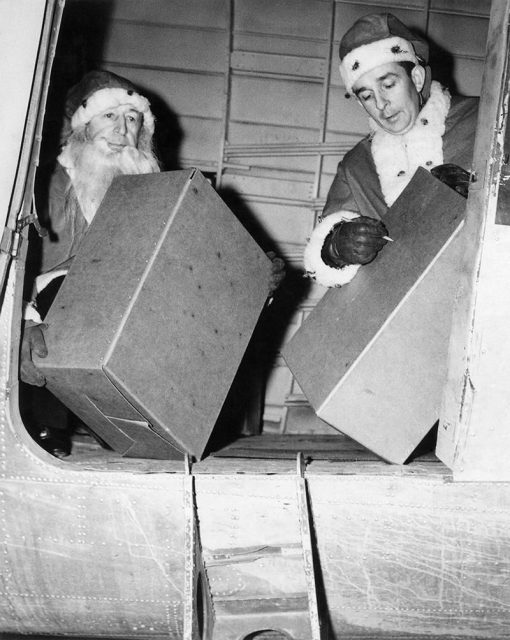 The site records Wincapaw as “overseeing operations of the Curtis Flying Service at the Rockland airfield as well as the nearby seaplane base. There were many occasions when he took to the air in less than ideal conditions to provide transport for sick or injured islanders… On many of these flights, his only means of navigation were the lighthouse beacons along the coast. His appreciation of the keepers and their dedication to keeping these lights well lit and their surrounding waters safe, grew each time”. 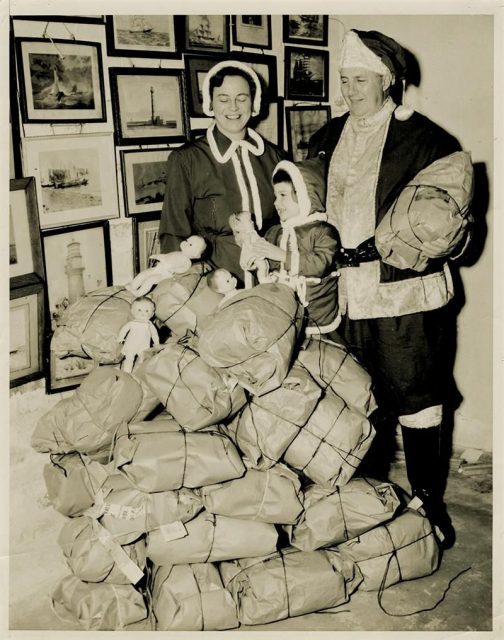 Checking packages of presents for delivery to lighthouses and lifesaving stations in 1954. (Dolly Bicknell collection)

Spreading seasonal love from the air was his way of giving something back to these hardy communities and their children. His first payload from 1929 was made up of candies and other surprises, together with more practical items such as coffee and newspapers.

He originally intended the flight to be a one off, though it proved so popular he made it a fixture. Wincapaw didn’t think of himself as Saint Nick, but his grateful recipients did. “This title was fondly bestowed upon them,” the site writes. “Eventually Capt. Wincapaw began to dress for the role, whiskers and all.” 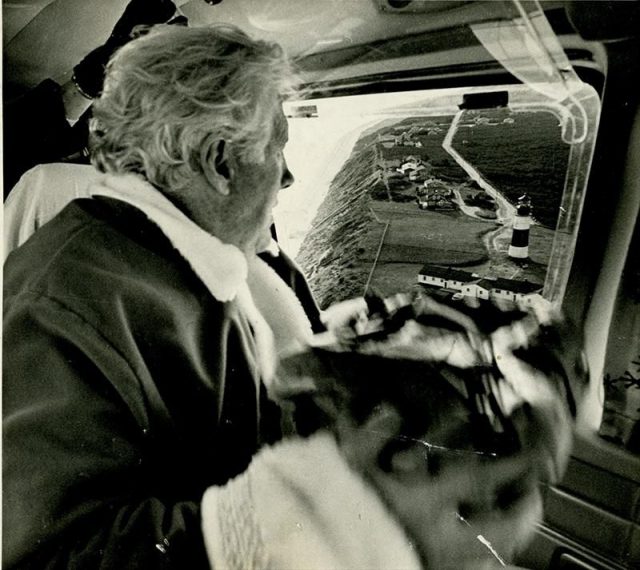 The site mentions “them”. Just as the real Santa has his elves, so the business of gift-giving became a team effort. The Christmas crew included son William Jr and his teacher from high school, Edward Rowe Snow. Snow was also an author and war veteran, whose media appearances are credited with putting the ever-expanding Flying Santa brand on the map. He was even enterprising enough to place copies of his latest book in that bulging sack.

Captain Wincapaw sadly died of a heart attack mid-flight in 1948. Snow took the reins and continued the legacy. “He and my mother would assemble all the gifts in the basement of our home for weeks leading up to Christmas,” said Dolly Bicknell, Snow’s daughter quoted by Smithsonian. The endeavor wasn’t cheap by the sounds of things. “He paid for about 90 percent of it,” she added.

The packages were dropped from a fair height, and had to be protected. Postcards were inserted so people could give feedback, or report any problems. One person who did experience festive issues was little girl Seamond Ponsart Roberts. In 1945 her dolly was broken in the fall. Not that the incident put her off playing with it.

“It was my doll, all bandaged up and with her arm in a sling,” Roberts revealed. ‘When I played with her the rest of the year, she was my sick doll who had had a very bad accident.” The family used the enclosed postcard to inform Flying Santa of the difficulty. A replacement arrived from the sky the following holiday.

Snow passed away in 1982, though showed no signs of wanting to hang up his red hat. Despite this loss, there have been various parties keeping Flying Santa in the air to this day. Brian Tague is current president of the Friends of Flying Santa, which was founded by Inga Hanks and Richard Boonisar.

Related Article: Why NORAD has been Tracking Santa Since 1955

The children of lifesavers in New England don’t listen out for sleigh bells and reindeer hooves. They hear the more regular sound of helicopter blades and the thud of parcels as they drop to the ground. Does it make the experience any less magical? On this evidence, it’s doubtful.

« Norma Jeane’s Transformation into Marilyn Monroe in Vibrant Color Photos
Funny: Chewbacca Singing “Silent Night” Like Only a Wookie Could Do »