Funny: Chewbacca Singing “Silent Night” Like Only a Wookie Could Do

Chewbacca sings! There ain’t many cover versions of famous songs like this – YouTube channel “How It Should Have Ended” released a video in 2016 of Star Wars favorite Chewbacca. But he isn’t blasting Stormtroopers or repairing the Millennium Falcon. He’s performing his own unique interpretation of Silent Night!

The audio of Chewie is actually from a long time ago, in a galaxy far far away. Or to be more precise 1999. Originally made by Scott Andersen, it was given a new lease of life just in time for the festive season and prequel film Rogue One: A Star Wars Story. The original song itself of “Silent Night” is a bit older. Joseph Mohr wrote the lyrics and Franz Xaver Gruber created the melody for the carol back in 1818 in an Austrian chapel.

James Covenant is the person responsible for the video. He’s also known for the Star Trek “Make It So” release, where Captain Picard’s dialogue was edited to the tune of Let It Snow.

As the loyal Wookie sings (if that’s the word) his way through the Yuletide classic in his native tongue of Shyriiwook, some priceless clips add more humor to the mix. Harrison Ford’s unmistakeable expressions show Han Solo reacting to the ditty. Suffice to say he isn’t impressed, remarking at one point that “This is ridiculous!” 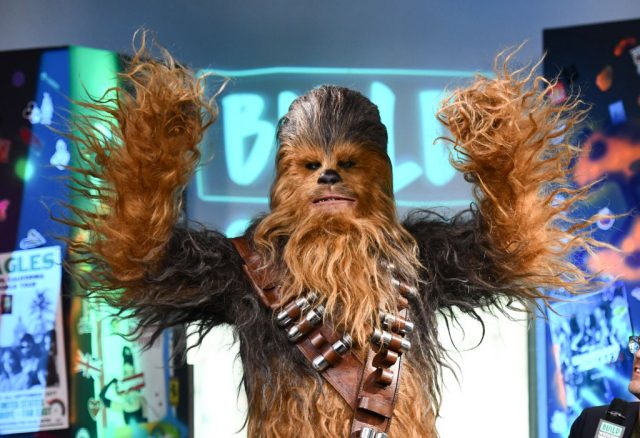 He’s not wrong, but then that’s all part of the fun. Chewbacca certainly has a softer side, demonstrated by his relationship to Han and his other friends aboard the Millennium Falcon.

Audiences even got a glimpse of Chewie’s family life in 1978, thanks to the legendarily awful Star Wars Holiday Special. Like Obi Wan it was swiftly struck down but unlike him was buried never to return. Fans unaware of its existence have become acquainted with it via the bootleg market. Here everyone sings, not just the Wookies. 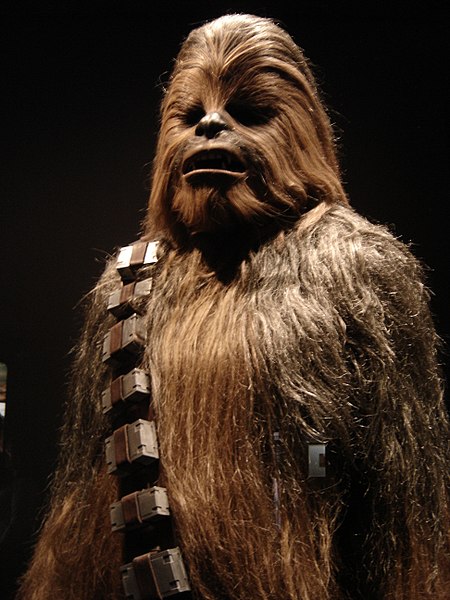 Lucas came up with the extraordinary character through a perfectly ordinary sight – his dog sitting up in the passenger seat of his car. Actor Peter Mayhew, who stood at 7’3 (2.2 m) in height, played the role from Episode IV in 1977 through to Revenge of the Sith in 2005. He reprised the part in 2015 for Episode VII but shared the yak and mohair costume with Joonas Suotamo, who then took over full time.

Mayhew passed away earlier this year at the age of 74. In tribute, Rolling Stone published a 2015 interview where he talked about how he became Chewie. “George [Lucas] told me right away it was going to be a mime character, because they put the noises on afterwards. It makes it easier for me because just try making loud enough noises through a mask! It’s very hard so you do as well as you can, and then they take it to the sound studio and put their own voices in it. It’s not easy, really.” 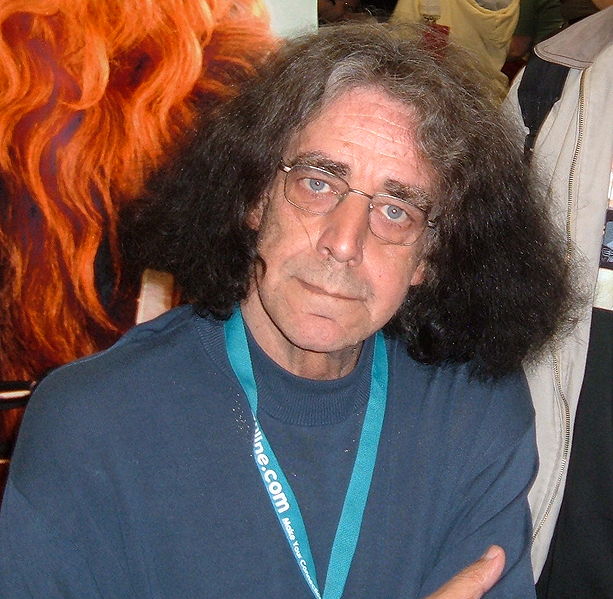 Peter Mayhew, the actor who played Chewbacca, in 2007. Photo by BrokenSphere CC by 3.0

He also spoke in glowing terms about his co-star. “Harrison is a magnificent teacher,” Mayhew revealed. “He teaches you what to do and how to do it. You just follow — you work off his words to get the reactions for Chewie.”

For the actor his much-loved role was “a teddy bear, basically. I bet you, if you looked around your office, how many people had a teddy bear as a youngster or a security blanket as a youngster? And that’s what Chewie is, he looks after everybody.”

Talking of good-natured behavior, this isn’t the first time Chewbacca has broken the internet. Candace Payne turned into an overnight sensation, thanks to a video of her trying on a Chewie mask. Was it a gift for her kids? No way!

“I’m not a bad mom,” she explained to camera. “I’m not a jerk, but in all honesty, at the end of the day, it doesn’t go in their toy box, it goes in my room.” Her joyful reaction showed the Force was still strong in that household.

The world’s focus is firmly back on Star Wars, with the release of Episode IX: The Rise of Skywalker. It’s received mixed reviews, with some disappointed at the way it wraps up the Skywalker saga. Maybe they can cheer themselves up by listening to a Wookiee hilariously botch a Christmas carol…!