Ancient Greek and Roman statues weren’t originally white, they were in glorious color. While the image of spotless marble Adonises and Aphrodites are prevalent in today’s culture, back then the situation was very different… some appear as colorful as circus clowns!

Of course they were white before the paint went on. However, traces of pigment that have stood the test of time run contrary to an established view that Greeks and Romans were averse to a splash of color.

The Gods In Color traveling exhibit wants to change people’s perceptions. Running since 2003, it aims to inform the unaware about “polychromy”. The foundation and creativity of this exhibit lies at the Liebieghaus Sculpture Collection (Polychromy Research Project) in Frankfurt, Germany. The Legion of Honor Museum’s website describes this as “the painting of objects in a variety of colors”. 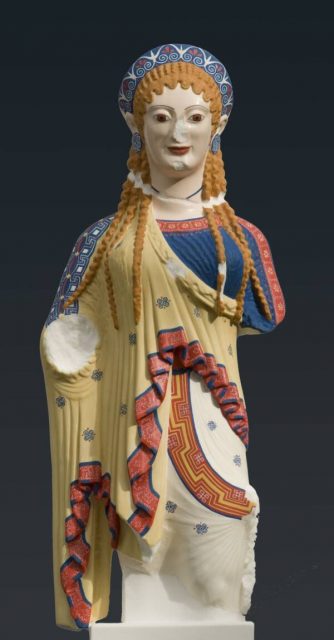 reconstruction of the so-called Chios Kore from the Acropolis in Athens is made of crystalline acrylic glass, with applied pigments in tempera. Image: Liebieghaus Sculpture Collection (Polychromy Research Project), Frankfurt

Features of the exhibit, as mentioned in the New Yorker, include “A Trojan archer from approximately 500 B.C.” This striking figure “wears tight pants with a harlequin pattern that is as boldly colored as Missoni leggings.” 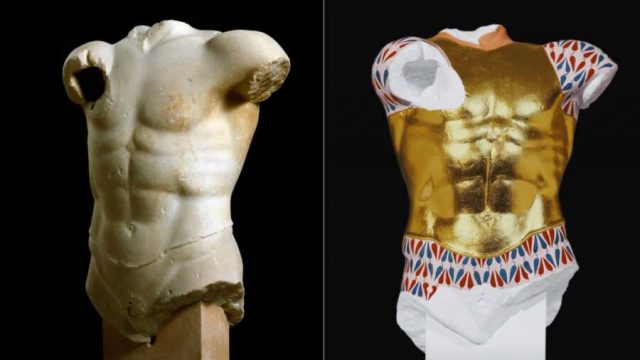 The “Cuirassed Torso,” was uncovered in 1886. No color was left on the marble, but analysis revealed traces of a variety of pigments that were used for the reconstruction. Image: Liebieghaus Sculpture Collection (Polychromy Research Project), Frankfurt

And that’s far from all. A bust of Caligula resembles an eerily lifelike cartoon, with eyelashes and highlights in his hair. The collection extends to the animal kingdom also. “A lion that once stood guard over a tomb in Corinth, in the sixth century B.C., has an azurite mane,” the piece explains, “and an ochre body, calling to mind Mayan or Aztec artifacts.” 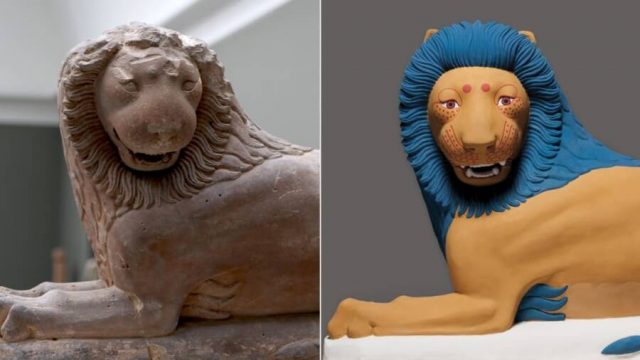 The idea of resurrecting statues this way was sparked back in the early 1980s. German archaeologist Vinzenz Brinkmann observed paint flakes on ancient marble… though this happened by accident! He’d made his own lamp so he could study surfaces for tool impressions. Instead he found a wealth of evidence relating to polychromy.

Working with fellow archaeologist (and wife) Ulrike Koch-Brinkmann, he creates detailed plaster recreations of classic marbleworks before applying color to them. By showing the reimagined versions alongside the accepted white sculptures, it shows visitors that the past is vibrant rather than faded. 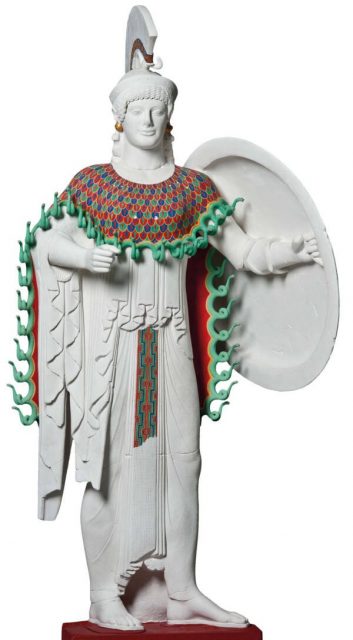 Reconstruction of the Athena statue from the Aphaia temple in Greece. The original cape was lavishly detailed and adorned with more than a thousand snake scales. Image: Liebieghaus Sculpture Collection (Polychromy Research Project), Frankfurt

Quoted by the New Yorker, Brinkmann says, “You need to transform your eye into an objective tool in order to overcome this powerful imprint”. The piece goes on to describe this imprint as “a tendency to equate whiteness with beauty, taste, and classical ideals, and to see color as alien, sensual, and garish.” Only colors established by rigorous examination can be used, so in some cases the statues aren’t completely colored. 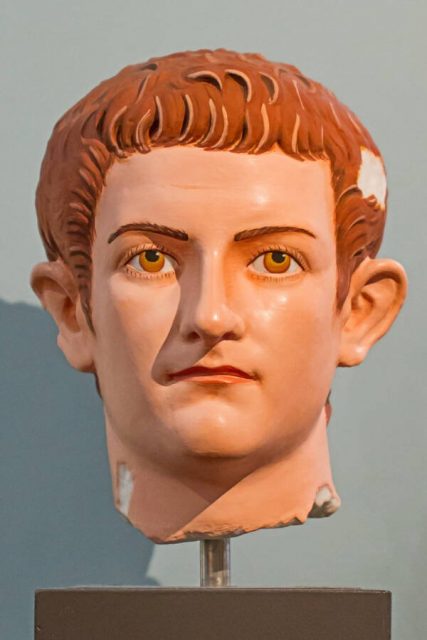 To Brinkmann’s surprise he found surviving pigments such as red and black were visible, even without a microscope or x-ray. As far as he’s concerned, people have been conditioned not to see the realities of ancient history.

The Phrasikleia Kore was a funerary statue buried in the ancient city of Myrrhinous. It was excavated in 1972. Image: Liebieghaus Sculpture Collection (Polychromy Research Project), Frankfurt

Polychromy has been talked about in scientific circles since the 19th century, but getting the establishment to take it seriously has been a long haul. The New Yorker notes that in 2008, “Fabio Barry, an art historian… complained that a boldly colored re-creation of a statue of the Emperor Augustus at the Vatican Museum looked ‘like a cross-dresser trying to hail a taxi.’” 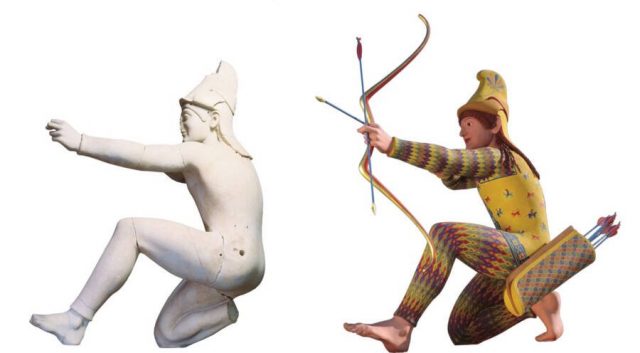 Who so sniffy? It’s all to do with the way Ancient Greek and Roman art has been interpreted through the centuries, following the demise of its civilizations. During the Renaissance (1300 – 1600) for example, form took precedence over color. Another influential time was the Neoclassical period – spurred on by the Age of Enlightenment in the 18th century. 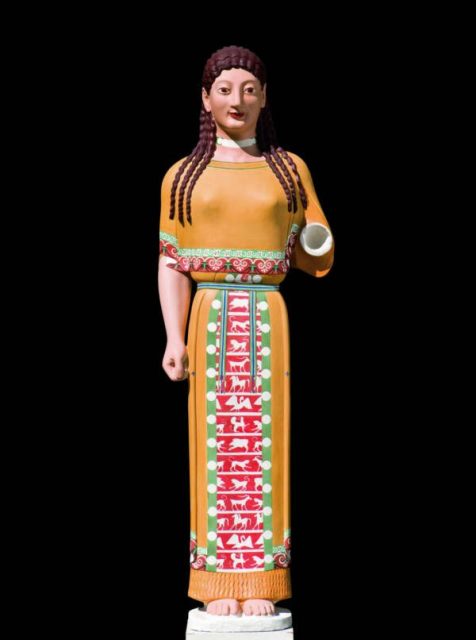 The Legion of Honor Museum comments that “sculptors such as Michelangelo who were inspired by Greek and Roman sculpture left their own marble and bronze surfaces unadorned, perpetuating this inaccurate classical ideal. Gods in Color emphasizes how ancient sculpture is incomplete without color.” 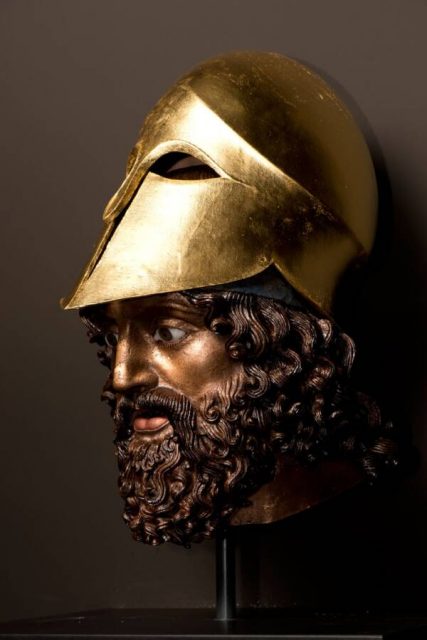 A focus on such aesthetics led to recreations of the ancient world becoming beautifully-rendered… but noticeably white. “This ardor for whiteness was so intense that the evidence didn’t stand a chance… Sculpture and painting had become increasingly independent disciplines, and artists who tried to merge the two were met with scorn” says the New Yorker.

The perception of white equalling might has also come into play, with some commentators highlighting the far right’s interest in uncolored statues. Associate professor Sarah E. Bond of the University of Iowa wrote for Hyperallergic that “the equation of white marble with beauty is not an inherent truth of the universe. Where this standard came from and how it continues to influence white supremacist ideas today are often ignored.” 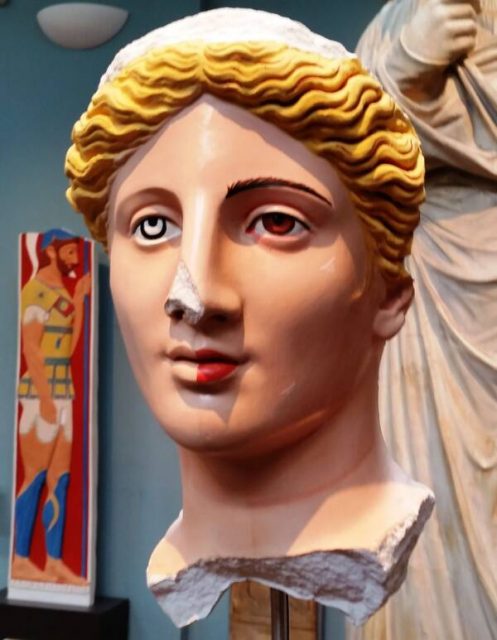 Cast of a marble head of a goddess, painted with pigments in egg tempera. It was found at the Esquiline Hill in Rome, near the Colosseum. Photo:
Alaskanspaceship/Wikimedia Commons

Voices championing polychromy and the colorful legacy of the Greeks and Romans appear to be few. One expert seeking to shine a light on this forgotten aspect of the past is Mark Abbe, professor of ancient art at the University of Georgia. Since 2000, he’s gained a close up view of what was lost. 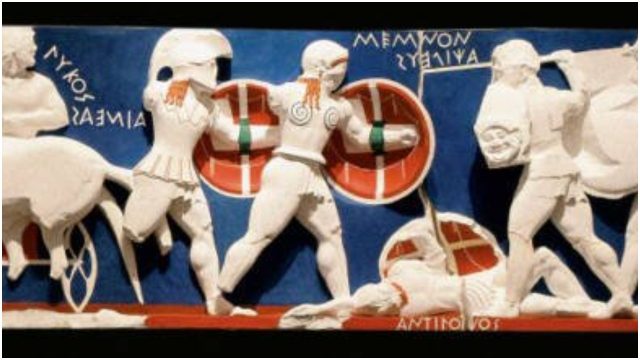 Working in the ruins of Turkish city Aphrodisias and exploring its archaeological heritage, he “started poking around the depots and was astonished to find that many statues had flecks of color: red pigment on lips, black pigment on coils of hair, mirrorlike gilding on limbs.”

Inadvertently or otherwise, his peers failed to respect the original condition of the finds. “For centuries,” the New Yorker writes, “archeologists and museum curators had been scrubbing away these traces of color before presenting statues and architectural reliefs to the public.” Amazingly, the famous Elgin Marbles were given a thorough polish by restorers at the British Museum in the 1930s, removing all trace of their former appearance.

Remnants could be found in the oddest of places. The late 19th century recorded that “Paint that survived was sometimes concealed in recesses: between strands of hair, or inside navels, nostrils, and mouths.”

For some, the effect is simply too dramatic. Others are engaged with the ancient world like never before. For Brinkmann and co, they’re adhering to that essential component of historic analysis: accuracy.