Archaeologists believe they have discovered the world’s oldest illustrated book, and it’s an ancient Egyptian guide to the afterlife. In ancient Egypt, folks were sure that once human life was over, something else awaited them — something different, something else, something new. But they had to know how to travel there, to the realm and company of the god who awaiting them, Osiris, god of the afterlife. He was, they were sure, ready to greet them once they reached Rostau, the spiritual place where they could, perhaps, become new beings.

But getting there was no easy task, and the Egyptians believed that picture books, of a sort, would help them make the journey. Not picture books of the modern, current type we know and understand, but rather pictures and text that lined ancient coffins and gave guidance to the newly dead.

What happens after physical life fascinated the people of ancient Egypt every bit as much as conscious, human existence did. They viewed the afterlife as simply a different spiritual plane, and in order to travel there, a guidebook was needed. This guide was called the “Book of Two Ways,” which contained maps of the underworld. Experts say that a piece of one of the copies of this book, found in 2012 during an excavation at Deir el-Bersha, was recently found in a sarcophagus that had been overlooked by archaeologists in the past and unsullied by grave robbers. 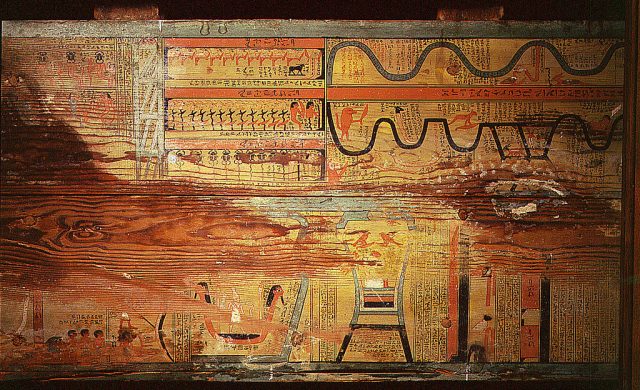 Detail from the floor of one of the coffins of Gua. The paintings recall the Book of Two Ways, modern name for the map and accompanying texts of passage past the obstacles of afterlife. (Photo by Werner Forman/Universal Images Group/Getty Images)

Text and images are visible on the sarcophagus’ sides. According to the head of the team that made the discovery, Dr. Harco Willems of the University of Leuven in Belgium, the text intended to “situate the deceased in the world of the gods,” he explained in a recent interview with the news website Smithsonianmag. 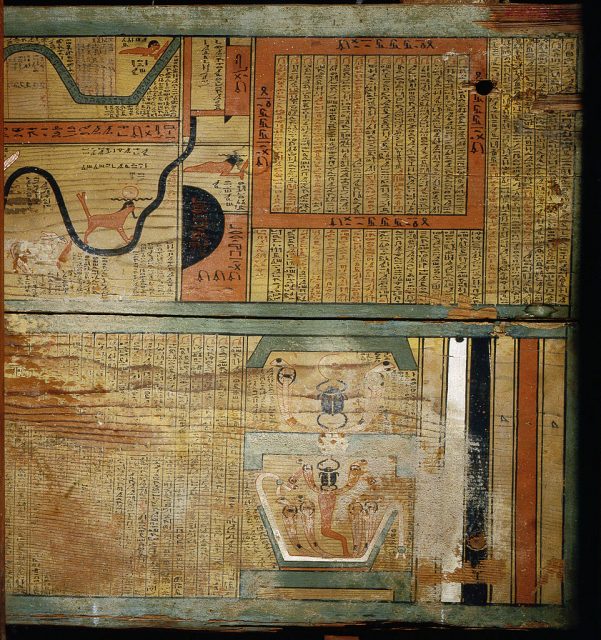 “Sometimes they are combined with drawings. At Deir el-Bersha, one frequently encounters “Book Of Ways”.” The grave discovered belonged to a woman, Ankh, although the coffin’s text is written as though the “traveler” was a man, which was the common approach to writings about the afterlife in ancient Egypt. Willems has been head of the dig at Deir el-Bersha since 2001.

There are only 24 copies of “Book of Two Ways” in existence, and experts say that the one found most recently is, in fact, the oldest — 4,000 years. In fact experts believe this is the oldest illustrated book currently in existence. 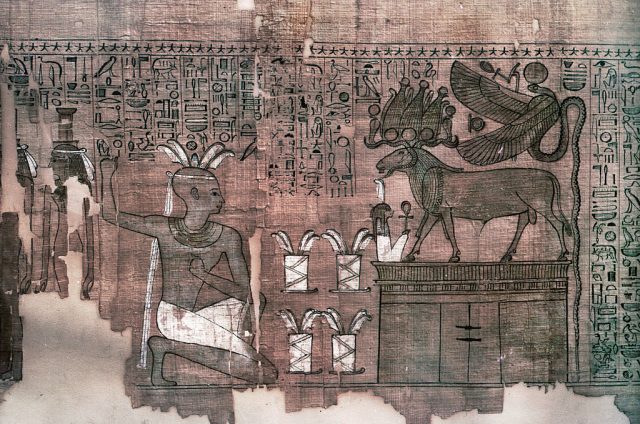 A vignette from the Book of the Dead of Tanafer. The dead man makes offerings to the gods of the underworld. Ancient Egyptian. Date/Period: 21st Dynasty, c.1069-945 BC. (Photo by: Werner Forman/Universal Images Group via Getty Images)

The text was written on the cedar walls of the excavated coffin, and found in a previously-unexplored burial shaft. This was a ritual in keeping with ancient Egypt’s fascination with, and devotion to, the afterlife, say archaeologists and other experts. “The ancient Egyptians were obsessed with life in all its forms,” said Rita Lucarelli, Egyptology curator at the University of California, Berkley, in a recent interview with the New York Times. “Death for them was a new life.”

Each person’s book was different, and varied according to their wealth and position achieved in society, Willems explained. “This one begins with a text encircled by a red line designated as ‘ring of fire.’ The text is about the sun god (Ra) passing this protective, fiery ring to reach Osiris,”  he told the Times.

In addition to the coffin walls found in the shaft, Willems and his team found a torso with no arms or legs, a mummified head, and a chapel with a rectangular inner hall. All in all, it was a remarkable discovery considering other archaeologists had plumbed the site but not accessed the particular shaft where Willems’ team found Ankh’s grave.

Archaeologists compete with one another — good-naturedly, no doubt — to find whatever they can of ancient Egypt that still remains hidden. Willems has published his findings to great acclaim, but word of another, even older “Book Of Two Ways” is rumored to soon be announced. Who knows, the world’s oldest illustrated book might yet to be found. But for now this discovery at Gua takes the top spot.

The Egyptologist in question, Wael Sherbiny, has not yet published, so the profession is abuzz with talk but no evidence yet. Still, this friendly competitiveness is partly what keeps them going, always on the hunt for new treasures, new artifacts and ultimately, new knowledge.