An incredible find has just been made in Israel when lucky archaeologists discovered a series of gold coins hidden in what appears to be an ancient “piggy bank”. When archaeologists start excavating at any particular site, they are often surprised by the incredible treasures they discover. By definition they must be optimists, of course, or else they wouldn’t be able to remain hopeful that important artifacts lurk somewhere beneath the soil.

Often, their efforts go unrewarded, even though they are knowledgeable about what lies beneath the earth and the civilizations that once lived in certain regions.  But the profession depends upon, in part, a series of “best guesses” that every archaeologist knows may — or may not — bear fruit.

So when a dig offers up even more rare and significant discoveries than any team of experts hoped for at the outset of the excavation, the occasion is cause for great jubilation. When the find is uncovered on a religious holiday of great significance to the very team that uncovered the artifacts, the event is particularly momentous.

Such was the case recently, when work at a dig in Israel uncovered a series of rare, gold coins more than 1,200 years old in a sort of ancient “piggy bank”. The archaeologists on site are working for the Israeli Antiquities Authority (IAA), and the statement released by the team’s co-director, Liat Nadav-Ziv, made clear just how thrilled the team was. 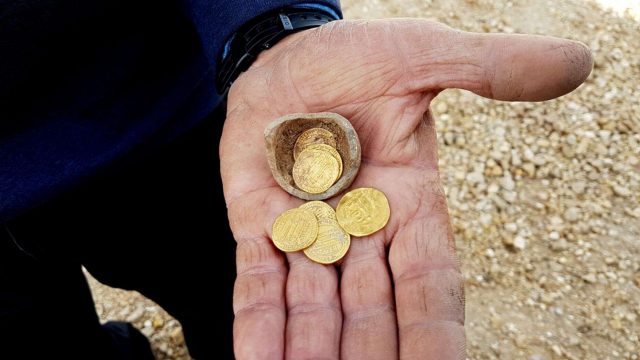 “… All of a sudden I heard shouts of joy,” Nadav-Ziv told Fox News when the statement was released. “I ran toward the shouting… where we were surprised at the sight of the treasure. This is without a doubt, a unique and exciting find, especially during the Hanukkah holiday.”

Specifically, the team found “a broken clay juglet containing seven gold coins dating to the early Islamic period,” the statement reads. The team goes on to suggest that the coins may have been a “potter’s personal savings, a ‘piggy bank’.” 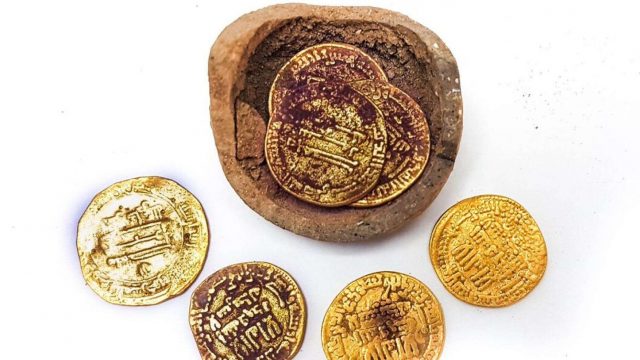 The gold coins and the little juglet they were found in. (Credit: Liat Nadav-Ziv, Israel Antiquities Authority)

The jug, and other items, were found on a dig near the city of Yavneh, and were examined by IAA coin expert Robert Kool. He told Fox News, “the hoard also included coins that are rarely found in Israel. These are gold dinars issued by the Aghlabid dynasty that ruled North Africa in the region of modern Tunisia…” In the statement, Kool explained, “Haroun A-Rashid (head of the Caliph) is the person on whom the popular story Arabian Nights, also known as 1,001 Nights, was based.”

The archaeologists also found “an unusually large amount of pottery kilns,” the statement continues, which experts believe were used to make jars, bowls and pots for commercial uses. Furthermore, the team found a wine-making site near the coins’ location. Because the number of wine vats was greater than those needed to accommodate residents, the experts theorize that wine made at the site was sent elsewhere, or imbibed by guests in the region.

Clearly, the area was filled with industrious citizens who cooked and baked food, and made wine, both for themselves and to export to other areas. It was, as the archaeologists described it to Fox News, an “ancient industrial area” that thrived for several centuries.

The archaeologists were digging in the region because a new neighborhood complex is soon to be built in Yavneh. Like so many glorious finds, the team had not anticipated discovering antiquities of such rare quality and historical significance.  But find them they did, and Kool, for one, had nothing but unalloyed joy at the find. “Without a doubt,” he enthuses in the statement released by IAA, “this is a wonderful Hanukkah present for us.”

It is precisely this kind of happy accident that fuels the energy, and curiosity, of archaeologists. After all, they can learn about history and civilizations in school, but it is digging in the dirt that brings them real joy, and brings us knowledge of the people, cultures and societies that came before us.