People are fascinated by learning about where their surnames come from and now many of them will find out they have Viking ancestors. That fascination has allowed companies that offer DNA analysis or guided genealogy research to become big business, especially in parts of the world where many of the inhabitants may be of immigrant stock. Attempts to investigate one’s roots have to have a starting point, though. Usually, it’s your surname.

Surnames generally offer insight into at least what country or general region our ancestors hail from, but only to a certain point. As ancient people spread, invaded, and colonized their way around the world, cultures became somewhat muddled, and the path to discovery less clear.

That point was recently highlighted in a story from Country Living, talking about a series of names that are closely linked to the Vikings, and many of them may surprise you. 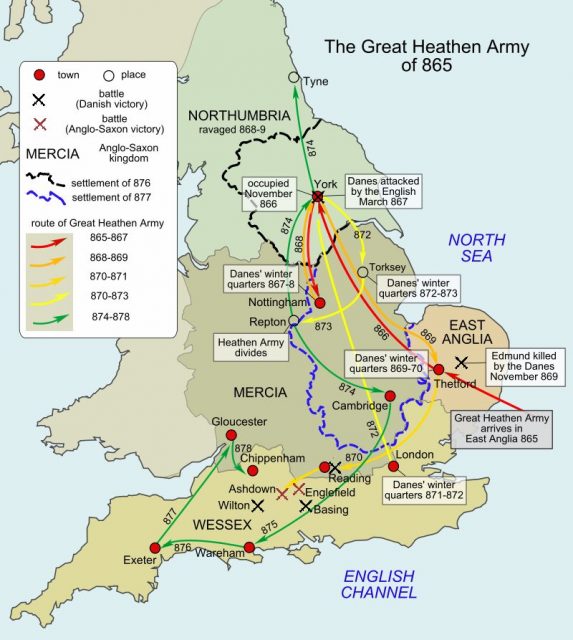 A map of the route taken by the Vikings which arrived in England from Denmark, Norway, and southern Sweden in 865. Photo by Hel-hama CC BY-SA 3.0

It’s not very hard to work out that many surnames that end in –sen or –son have their roots in Scandinavia, where the early naming conventions involved identifying a man as being the “son of” his father; that’s the seed of where names like Christiansen, Erikson, or Gunnarson come from. 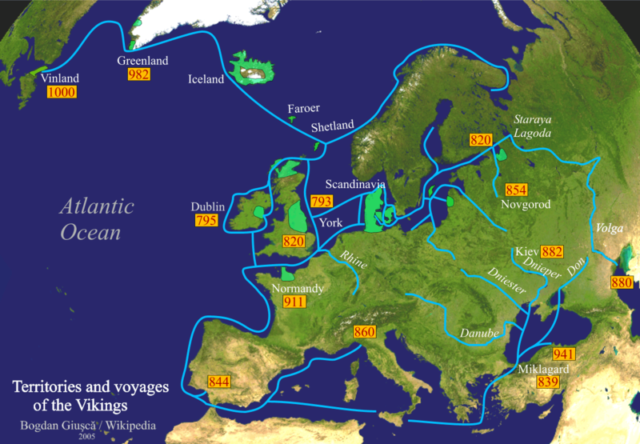 Activity area of the Vikings, Mediterranean from the Black Sea , the Caspian Sea , the United Kingdom from Iceland , the North American continent.

Alexandra Sanmark of the Centre of Nordic Studies and the History Channel has been doing some new research into surnames that were common during the Viking Era, and found some surprising results. According to their work, millions of modern British people have names that suggest a Viking in their line 900 or more years ago.

A number of the names on this list are also words that describe traits, either physical or personality traits, which is in keeping with the style of the time. During the Viking era, family names as we currently understand them weren’t in use. Instead, a person was given a first name and some type of second name to help identify them separately from anyone else with the same first name. That name was often a reference to parentage, but it could also refer to some identifying characteristic, which is how names like “Short”, “Long”, or “Wise” are on this list.

The clearly Scottish names that start with Mc or Mac may not sound Viking to our ears, but the prefix does the same job as the –son at the end of more obviously Scandinavian names. Both forms come from mac, which is the Gaelic equivalent of saying son of. 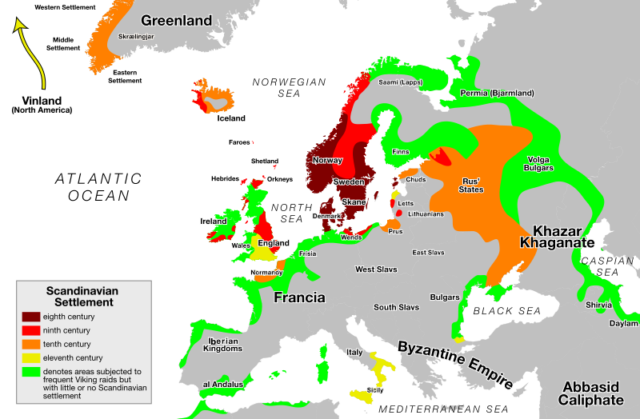 Map showing area of Viking settlement in the eighth (dark red), ninth (red), tenth (orange) and eleventh (yellow) centuries. The settlement of Iceland was part of a wider pattern of Viking migration.

Sanmark’s research has also shown that Scotland is one of the parts of the British Isles that had the most contact with Viking invaders centuries ago, especially Caithness, Shetland, and Orkney, so it’s not a surprise that so many names on this list are clearly of Scottish origin. The Vikings mostly sailed the Atlantic Ocean, raiding along the British Isles and the Western European coast.

There are other surnames that aren’t on this particular list which have Viking roots although they don’t jump out at you. In addition to being patronymics that show who your father is, or being called by some identifying feature of your own, people were also sometimes called second names that related to where they lived, or what they did for a living.

The website Behind the Name identifies the name Hall as being a Scandinavian surname, tying it to people who either lived or worked in the hall of a noble. The surname Ness comes from the English word ness and the Norwegian word nes, both of which refer to a promontory or headland, and is an example of being called for the place one lives.

In ancient times, genealogy was passed orally, an art that has become almost lost in our high tech world. The desire to know is clearly still a part of us; however, and today’s research and technology are making it easier to find out the history of where and how you came to be.