Saturday Night Live has been a staple part of the US TV diet for over 4 decades! But back when it started, it was pretty radical. How so? By getting the American establishment in its cross hairs during primetime. This was a first for network entertainment. SNL fired bite-sized chunks of comedy at an unsuspecting public, delivered by performers who went on to become the best in the business. Names such as Bill Murray, Jane Curtin, Dan Aykroyd, John Belushi and others.

Canadian-American Lorne Michaels has been running the show for most of its time on air. He started out on the Canadian Broadcasting Co and moved to the States as a writer in the late 60s. Amongst his credits were Rowan and Martin’s Laugh-In, a variety show not dissimilar to SNL. 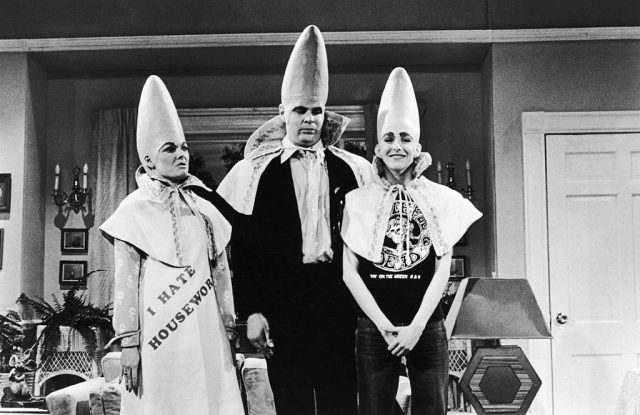 Jane Curtin, Dan Aykroyd and Laraine Newman, in a still from their skit ‘The Coneheads’ in 1975. (Photo by Warner Bros./Getty Images) 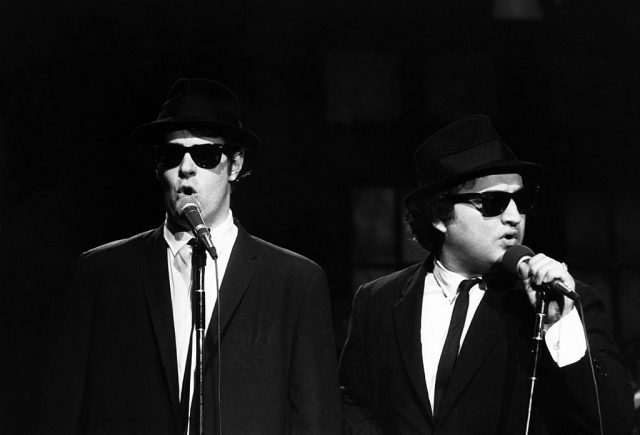 Paired with young NBC exec Dick Ebersol in 1975, he was asked to devise a program that would fill an important gap in the schedule. This had been created when talk show legend Johnny Carson decided to ditch his weekend workload. For Michaels, then 30, it was an exciting opportunity to push the boundaries of what Saturday night TV could bring to a network audience. 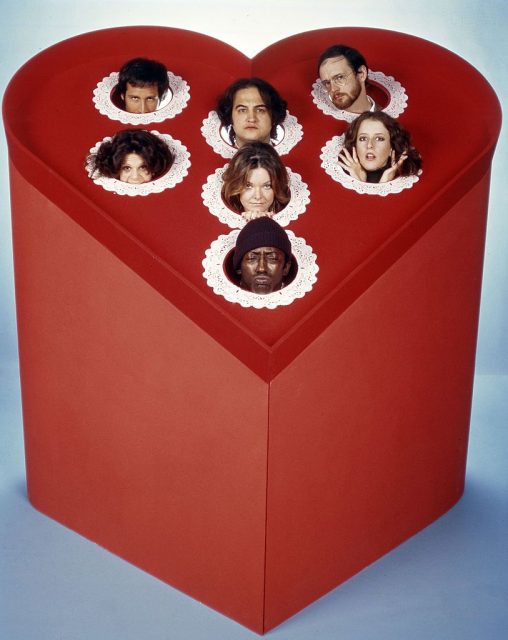 “I thought if I could do a show that that I’d watch, that it would work,” he told the YES Network in 2008. “When I looked at the idea of doing 90 mins, I just sort of added up everything I was interested in, which was comedy and music and politics and films. And threw it all together… at the beginning I had the ingredients, I didn’t quite have the recipe.” 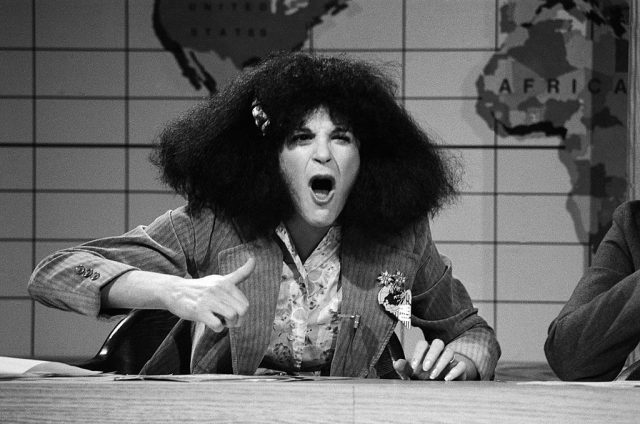 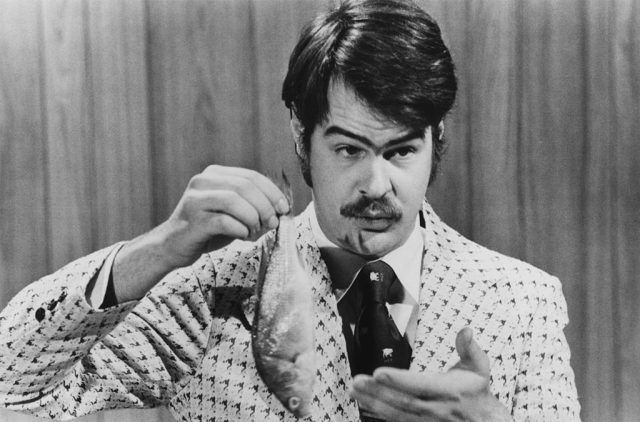 It took a little while for the series to come together in the way people know best. At first they titled it NBC’s Saturday Night. SNL didn’t come till the 2nd season. Debut host George Carlin also received some surprising feedback from NBC top brass. Surprising by today’s standards at least! 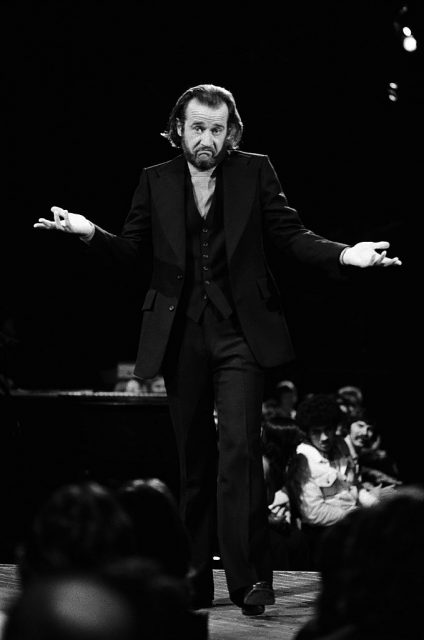 Michaels revealed “someone at the network who’s in charge of us wanted him in a suit. He felt we would lose the affiliates if he didn’t wear a suit. And he wanted to wear a t-shirt, which was a 1975 argument. So the compromise was he wore a suit with a t-shirt.” 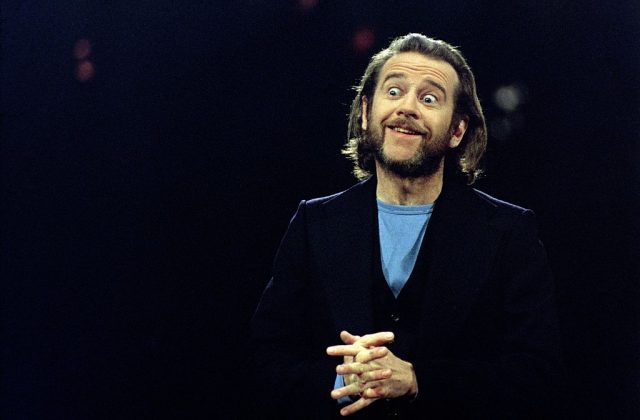 George Carlin with the suit and T-shirt on SNL — Photo by: Herb Ball/NBCU Photo Bank

Jane Curtin commented in a 2019 interview with the New Yorker that “Television was very highly produced and crisp and clean… So everybody was sort of perky and American-looking, and here were a bunch of people who didn’t quite look like they should be on television.” 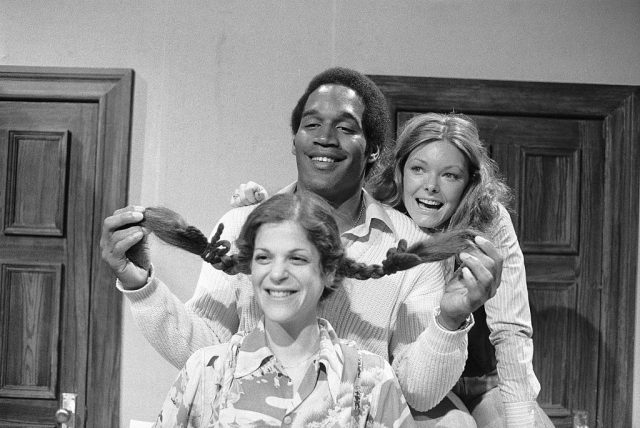 In fact the original cast, sourced from comedy improv groups like Second City, were tagged “The Not Ready for Prime Time Players”. The line up for the debut season included Chevy Chase, Curtin, Aykroyd, Belushi, Gilda Radner and Garrett Morris. NBC’s Saturday Night wasn’t warmly-received to begin with, but once it hits its stride the rest was hysterical history. 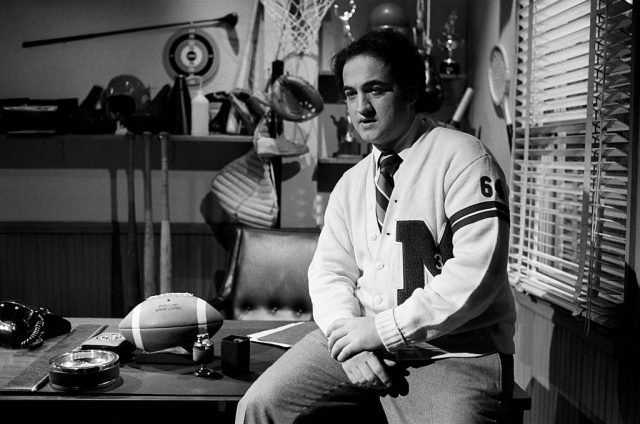 Chevy Chase was identified as SNL’s first breakout star, though Michaels encountered him off-duty. “Chevy Chase I met on a line in LA,” he revealed to the YES Network, “a movie line, yeah.” He then added, “It was a certain kind of movie line, for a Monty Python film.” 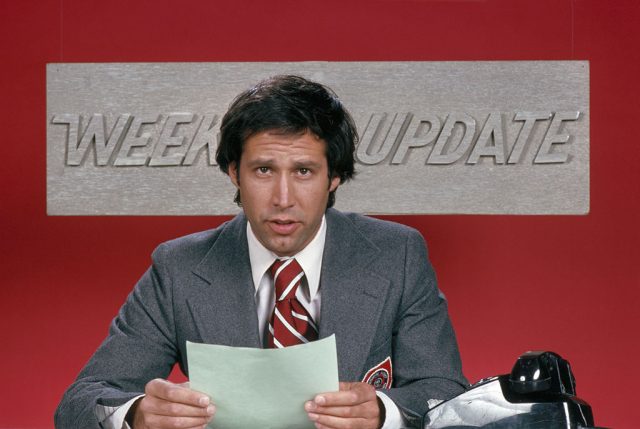 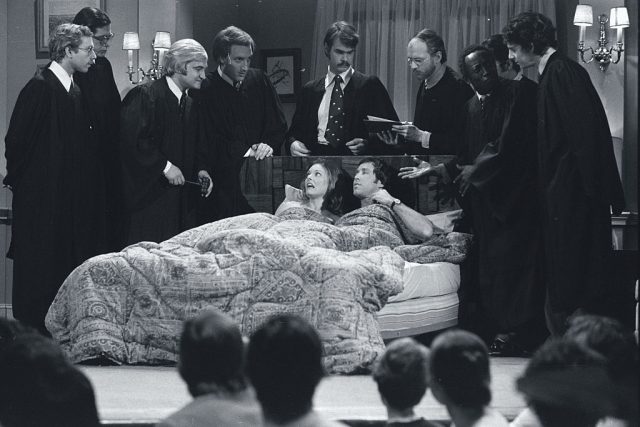 Jane Curtin and Chevy Chase play the role of a couple in bed with the Supreme Court Justices watching over them on Saturday Night Live. (Photo by Owen Franken/Corbis via Getty Images)

Chase hosted the high profile Weekend Update section, playing a newsreader. He also opened each show with physical comedy and a cry of “Live from New York, it’s Saturday night!” In one famous case he broke his groin when falling from a podium. 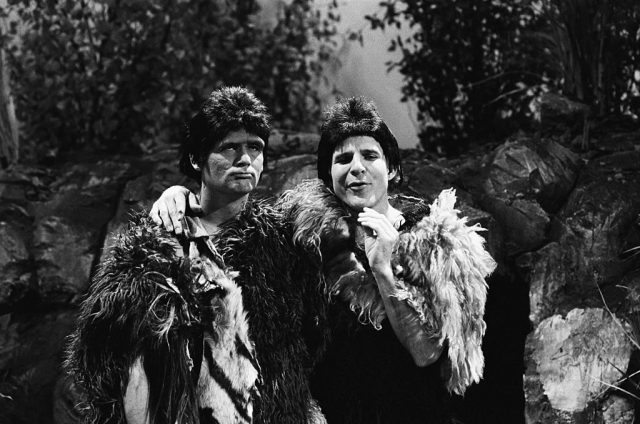 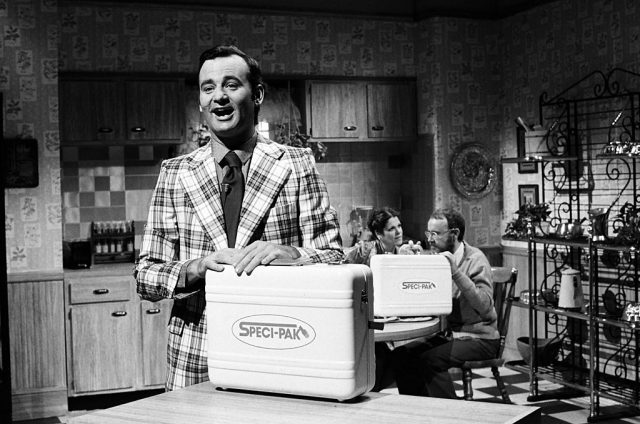 Bill Murray as spokesperson, Gilda Radner as wife, Buck Henry as husband during the ‘Speci-Pak’ skit on November 10,1979 — (Photo by: Alan Singer/NBCU Photo Bank/NBCUniversal via Getty Images via Getty Images)

SNL in those days was the place where anything might happen. “You kept waiting for something to go horribly wrong,” Curtin said, “because it was live. But then it sort of grew into itself, and started being really funny.” Curtin eventually took over as host of Weekend Update. 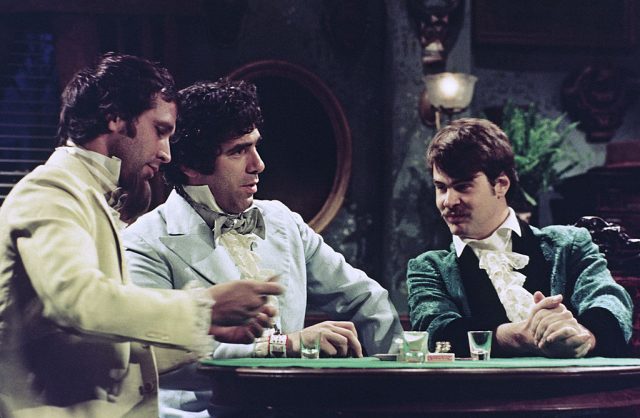 While comedy and music jostled for position at first, it became clear making people laugh was the way to go. Early plans for a permanent host, thought to be Albert Brooks, were also scrapped. Another element of the show, a segment called The Land of Gorch, was a Jim Henson production. However there wasn’t an appetite for Muppets on SNL, so production was stopped shortly after the first year. It went on to influence Henson’s The Dark Crystal. 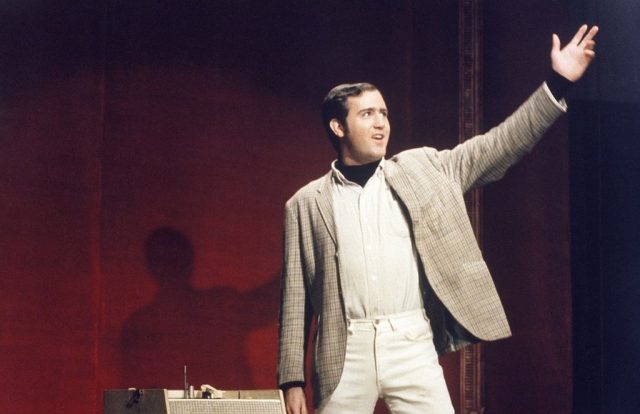 Chase moved swiftly into movies and Bill Murray came on the scene in 1977. It took Murray a period to adjust, with the future star appearing strangely uncomfortable. He notoriously got into a mild altercation with his predecessor when Chase returned to guest host. Cast mates were angry over what they viewed as his abandonment of them. 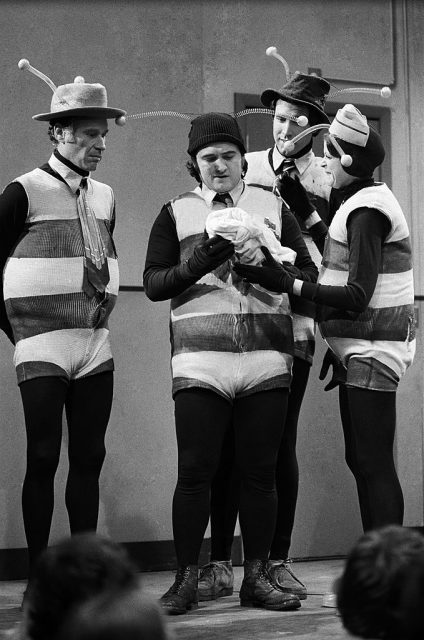 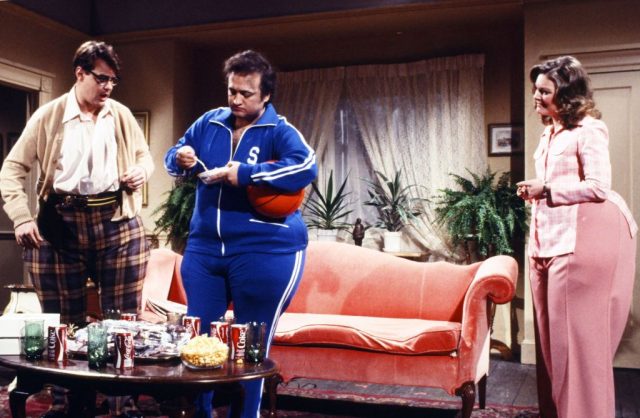 Dan Akroyd as Bob Widette, John Belushi as Jeff Widette, and Jane Curtin as Betty Widette during the ‘The Widettes’ on December 16, 1978 — Photo by: NBC/NBCU Photo Bank 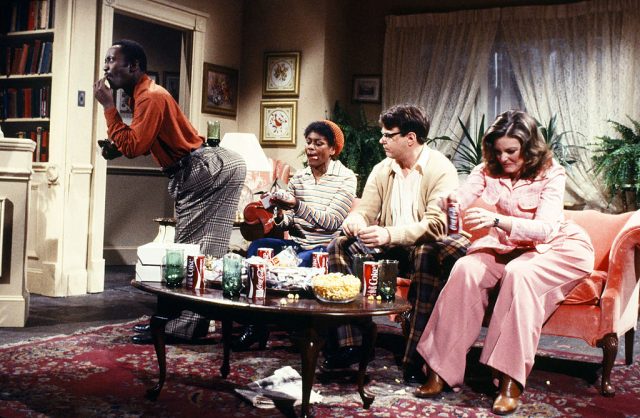 With SNL ruling the airwaves during the latter half of the Seventies, it faced an uncertain future by the start of the Eighties. Some players were doing hard drugs, with Belushi’s habit spiralling out of control. Many wanted to move on. Michaels thought it would be a good idea to put the show on hiatus for 6 months and bring in new people. With things not well between him and NBC, he left in 1980. 5 years later he was re-hired and has stayed ever since. 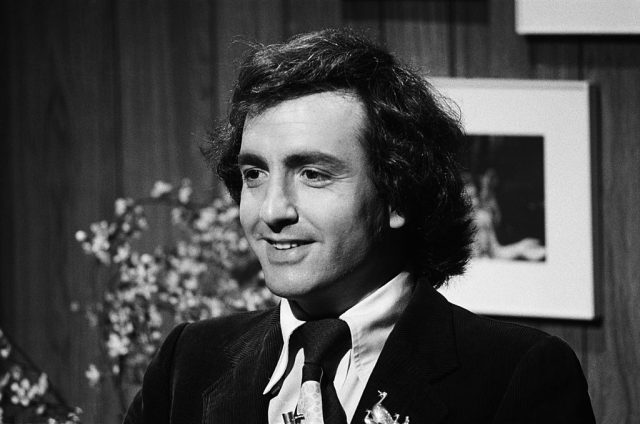 “Lorne really was the skipper of that show,” Curtin commented. “It was his baby. And it was very difficult to pass that on to somebody who didn’t understand what the premise was, what it was based on.” She went on to say, “I’m not really sure Lorne understands how to do it, but he does hire well.”

As for the head honco, he considers himself fortunate he got the chance to make SNL in the first place. “You couldn’t do this show now,” he said, speaking at the Cannes Lions event last year. “Mostly because of budget…. The depth of costumes, design, film, all of those plus the talent office and all of the people working with each other…you can’t start that now because we’re in an age of narrowcasting (an example being streaming services).”

Related Article: The Bad Blood Between Chevy Chase and Bill Murray which Erupted into a Fistfight

It may be traditional, but for millions of viewers Saturday Night Live still packs a comedic punch in today’s competitive and often volatile landscape.