Disneyland has lost its original Sword in the Stone. It used to be that only a powerful king could pull out mighty Excalibur. In the 21st century however, the rules are a little different.

Earlier this month, WDW (Walt Disney World) News Today reported the Sword had gone missing, in what was presumed to be a refurbishment move. The display has been standing in front of King Arthur’s Carousel since 1983, paying tribute to ‘63 animated classic The Sword in the Stone.

With this incident, the ancient world meets the modern in no uncertain terms. Though Screen Rant attempts to paint a prosaic picture, writing “Sans a magical sword, the infamous anvil housing donned a piece of duct tape where Excalibur once sat.” 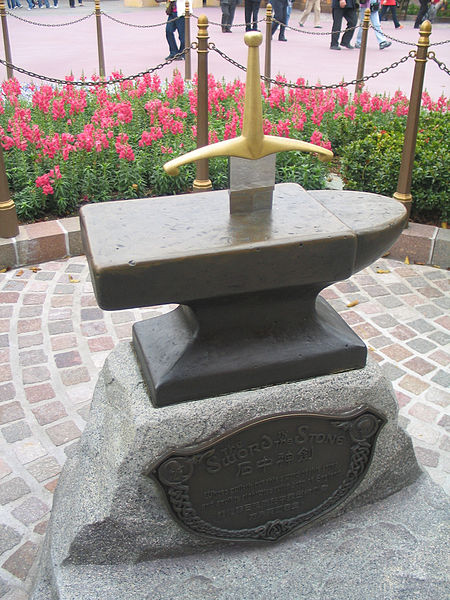 The Sword in the Stone at Disneyland. Photo by Dave Quicky CC by 2.0

Things were looking somewhat less than regal. But a twist has revealed intrigue in the kingly court. Twas not working men who drew Excalibur from the noble Stone, but a meddlesome visitor from outside the Kingdom!

An anonymous source, quoted by WDW, says: “I was at Disneyland last Wednesday and watched a very burly man break the sword!” Who was this rogue? His identity was revealed by another source, whose name is also absent from the record. “My friend Sam broke it last week on the 8th when we went to Disneyland,” the confessor reveals. “He literally ripped it out”. 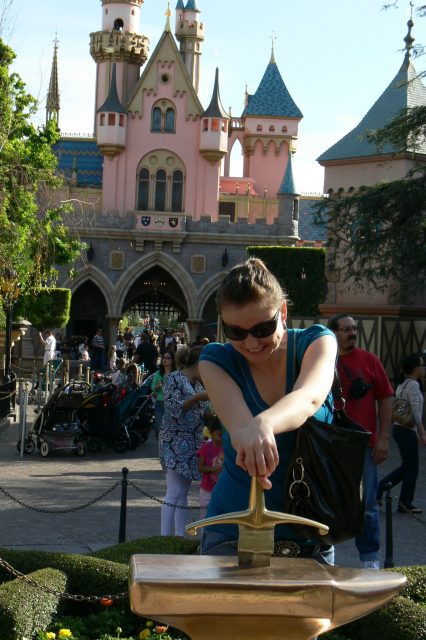 Trying to pull out the Sword in the Stone. Photo by Jodie Wilson CC by 2.0

In fairness to Merlin’s ancient powers, the Arthurian area did appear a little neglected. “The staff said that it was really old and that’s why he was able to do so.” The effort left pieces of Sword in the anvil, with the tape sealing off the fragments to prevent tourists injuring themselves. Far from a magical measure, but totally necessary safety.

“It was his first time at Disney and he’s a pretty buff dude,” Sam’s (now perhaps former) friend explains. “I told him if he pulled it out he’d win a prize and he just used brute force I guess.” 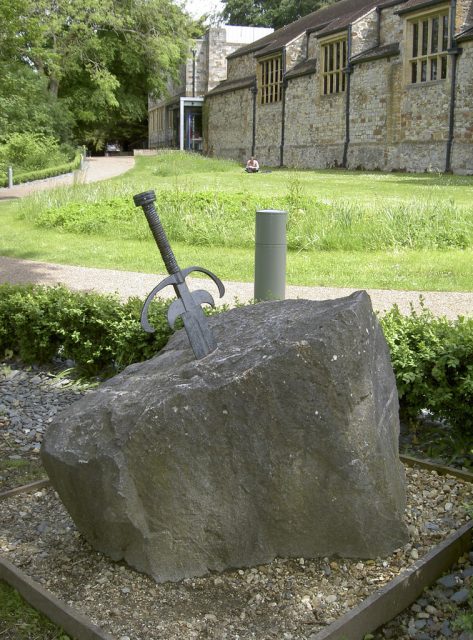 The sword in the stone in the grounds of Taunton museum. © Copyright Neil Owen CC by 2.0.

The information is a sad end to this chapter of mythical English history, yet in true Disney style there is a happy ending. WDW News notes, “if anything, it forced Disney to give the display a slight revamp”. Visitors to the site can now see another Excalibur in its place, together with a freshly-polished anvil for it to rest in. As for where the House of Mouse gets its Excaliburs, one can only presume there’s a magical swordsmith on site to forge the fabled weapon! 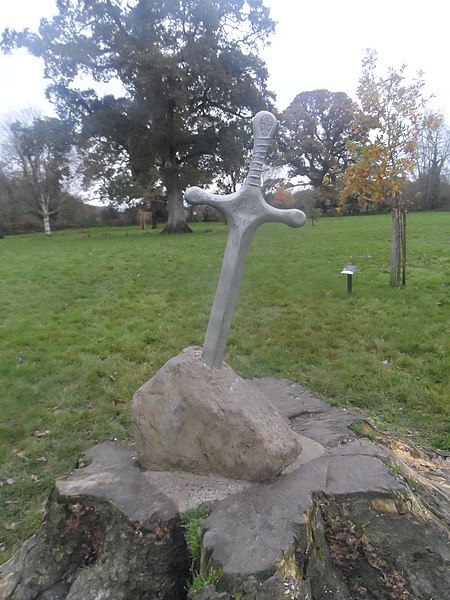 The Carousel actually closes today for several months, so whether work would have been done on the Sword and Stone anyway is a question for the ages. Disney’s 1963 The Sword in the Stone is a much-beloved classic. Based on the 1938 book by T.H. White, it put a fresh spin on English mythology with a voice cast of child actor Rickie Sorensen (Arthur), Karl Swenson (Merlin) and Martha Wentworth (Madam Mim).

Disney had been planning the film since the late 1930s but the second world war interrupted production. It was eventually completed during the very different era of the Sixties! Director John Boorman brought the Knights of the Round Table into the 80s with Excalibur (1981). The striking look was influenced by his abandoned adaptation of Lord Of The Rings.

Yet for many, Disney’s take is their first and most-loved version of Arthur’s story. The fondly-remembered animation stands in stark contrast to more recent fare based on Arthurian legend. Guy Ritchie’s laddish King Arthur: Legend of the Sword became a box office flop in 2017, putting a proposed series to the sword. Then Joe Cornish’s family adventure The Kid Who Would Be King from last year seriously underperformed.

Related Article: Sword in the Stone in Tuscany Proven Real and Likely Inspiration for Excalibur

When King Arthur’s Carousel reopens, maybe it can put some of the magic back into this popular slice of English folklore.