A log cabin from pioneering times in American history has been discovered hiding beneath a Pennsylvania bar that was slated for demolition. It’s incredible what sometimes lurks beneath the run down, dilapidated exteriors of old American buildings, as if those folks who later constructed new places could not be bothered tearing down what once stood, choosing instead to lay a new structure over, or on top of, an old one.

That was the case for an old tavern in Pennsylvania, which stood on the corner of two intersecting main streets in a small town that was left to become derelict and run down. Finally, however, construction crews got the green light from local officials to begin demolishing the eye sore, and to everyone’s surprise, a treasure existed beneath that fading exterior — a 200 year old log cabin that authorities say can and should be preserved. 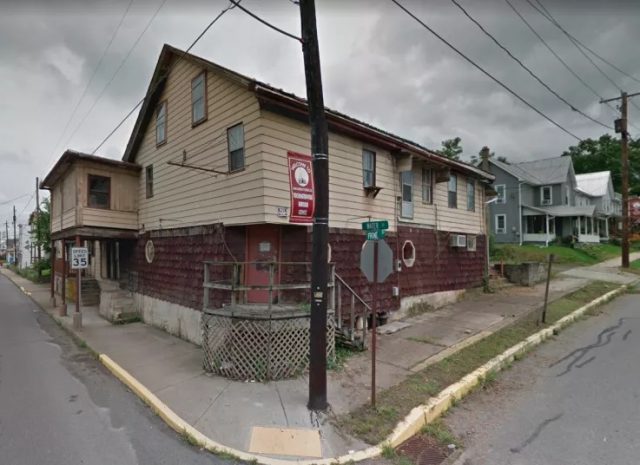 Google Street View image of the condemned tavern before the hidden log cabin was found below it. Copyright Google Earth

Tyler Dombroski, mayor of the town of Washingtonville, one of the state’s oldest communities, told the media, “After our demolition contractor started pulling the outsides of the building off, he discovered there was a log cabin in there.”

The bar had been closed down for approximately 12 years, Dombroski said, but the council had hoped to save some of the large, wooden beams from the back room “because they were so beautiful.” No one, however, was prepared for what the crew ultimately found. Once the demolition was underway, “everybody’s jaws dropped, because it’s a very old structure.”

Decrepit Pennsylvania bar revealed to be log cabin from 1700s while under demolition https://t.co/8AHqZmsEg7

Washingtonville is a small community that dates back to the end of the American Revolution in 1783. Dombroski suspects that the cabin is one of the settlement’s very first structures, but he acknowledged that its actual origins are “really a mystery right now.”

What he does know, however, is that the cabin is historically significant and worth preserving. Council brought in an expert in these kinds of old dwellings, Dombroski explained to Newsweek. The specialist, he said, was very encouraging. “He said it is very much salvageable,” Dombroski said, “and he couldn’t believe it himself, and said it is very much worth saving.”

But just how the town council plans to preserve the cabin is unknown at the moment.  Dombroski said that council has requested bids from contractors who can take the building apart, piece by piece, then catalogue and store each wooden log so the structure can be reassembled. Just where that will happen, and who will pay for it, is up in the air at the moment, he admitted.

“Because we are a small, rural community, we have a small budget to begin with, and no money set aside to rehabilitate the building, which could be quite expensive.”

In order to ensure the cabin remains part of the village, whose population is only 270 individuals, Dombroski is hopeful a civic minded buyer with deep pockets will come along and make a bid to buy the cabin, and keep it in the area.

Related Article: Website Reveals if Anything Grim Happened in Your Home

Standing as it does right now makes it vulnerable to the weather, as it has no roof. But even now, in the cabin’s state of disrepair, people are visiting it to see this centuries old part of Pennsylvania’s past. “It’s like a tourism attraction,” Dombroski said to Newsweek. And no doubt, if the money can be found to safely take apart and then rebuild the cabin on another site in Washingtonville, even more visitors may flock to get a glimpse into this part of their state’s history.