Prehistoric Giant Rat the Size of a Human Discovered in Brazil

An giant rat the size of a human has been found in South America. Thankfully for the squeamish, it wasn’t alive. Archaeologists working at the Acre dig site in the western Brazilian Amazon uncovered 2 fossil skulls – one almost completely preserved, the other a fragment. The creature, named ‘Neoepiblema acreensis’, existed 10 million years ago and has become the focus of a new brain study.

Quoted by the Daily Mail, Prof José Ferreira describes the rat as “an extinct relative of the chinchillas and pacaranas”. The report goes on to say the evidence “was so well preserved it even had impressions of olfactory bulbs – the region of the brain that process odour – and the frontal and temporal lobes which are involved in thoughts and actions.”

Neoepiblema acreensis was 5 feet long and around 175 lbs in weight. Any animal crossing its path would have to deal with “two huge curved incisor teeth”! 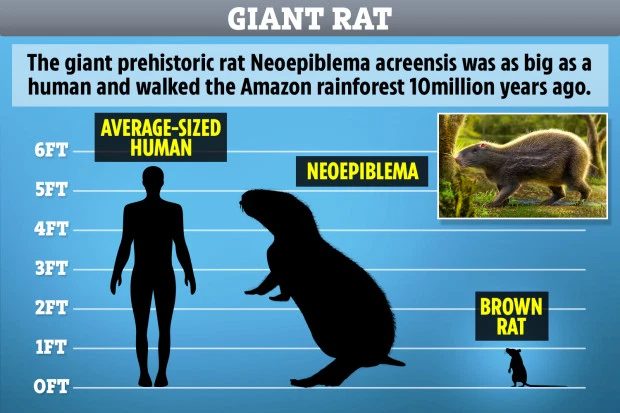 Diagram showing the huge size of this rat. Image from The Sun

Prof Ferreira and his team published their findings in the Biology Letters science journal. Aiming to find out what made these carnivorous critters tick they used, according to the study, “non-invasive imaging techniques on an exceptionally preserved giant caviomorph skull” which served to “address the evolution of the brain in this large rodent clade (group of organisms) characterized by exceptional size range in the fossil record.” 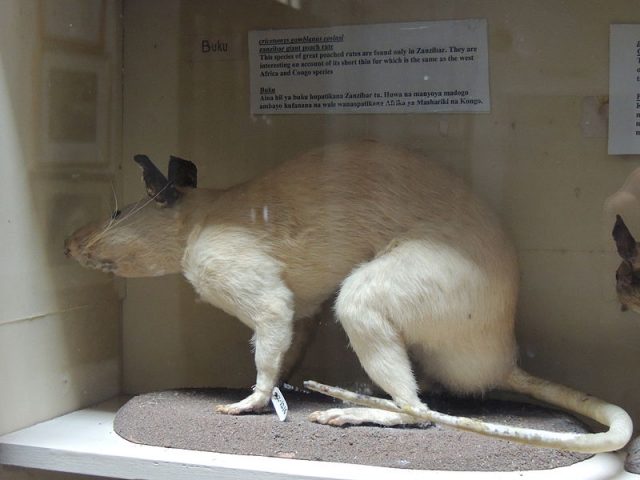 In other words, they knew this rodent was big. But was that reflected in its brain size? A medical CT scan was employed, with calculations made of the animal’s EQ, or Encephalisation Quotient. This is “a way to measure the difference between the expected size for an animal of a certain weight and the brain’s actual size.” (Daily Mail)

Ferreira’s study reveals that being an alpha predator doesn’t require mental agility. Once the ancient noggin was reconstructed digitally, it appeared the rat had a brain of 4 oz. Strikingly small… not that anyone would say that to its face! 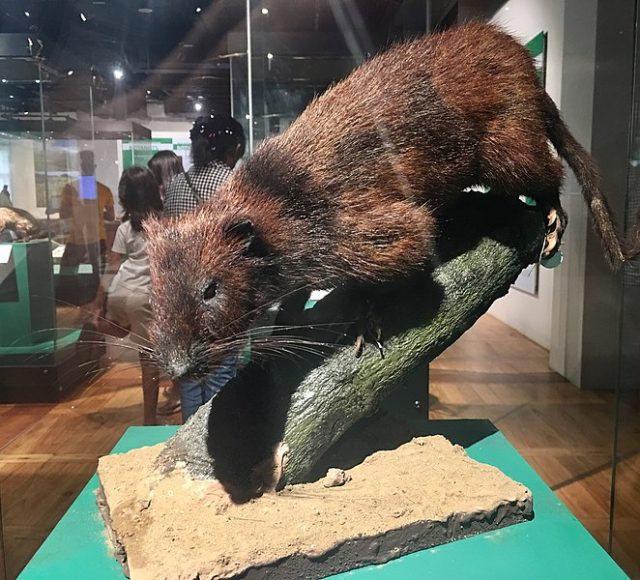 So why was the brain so diminutive? Put simply, size isn’t everything. “A large brain can bring benefits while also imposing higher energetic costs,” writes Ferreira and co in Biology Letters, “leading Herculano-Houzel (the neuroscientist) et al. to hypothesize that the large brains of giant rodents could have been physiologically costly and may have contributed to their extinction.” Neoepiblema acreensis may well have been slow up top, but probably had a better chance of survival than its fellow squeakers.

Another factor is environment. The creature looks to have had the region to itself, without much in the way of competition. Crocodiles were apparently its chief threat. Aside from that, it ruled the prehistoric roost.

The study notes, “a large brain implies unnecessary energetic costs when associated with large bodies that are also metabolically costly. Thus, without ecological pressure… there would be no need to increase brain size in these large Neogene rodents.”

South America has proved a goldmine of sorts for epic finds. Fox News mentions the 2,500 lb ‘Stupendemys geographicus’ mega turtle, first described in the 1970s. Recently found fossils confirm stories about their sheer scale. The turtle “which had a shell that reached nearly 8 feet in length” was “believed to have lived between 5 and 10 million years ago across the entire northern part of South America.”

If a turtle doesn’t sound dramatic enough, then how about a Jurassic Park-style predator? Brazil yielded “the fossils of a ‘bonecrushing’ ancestor of the modern-day crocodile” that turned dinosaurs into the prey. Roaming the land approx 230 million years back, the ‘Dynamosuchus collisensis’ “has been nicknamed the ‘T. Rex of its time.’”

As for super-sized rodents, the idea has been capturing the public imagination for centuries. The Giant Rat of Sumatra is a creation fleetingly referred to in a Sherlock Holmes story by Sir Arthur Conan Doyle. It went on to become the title of a Hardy Boys mystery and inspired a monster in a classic Doctor Who serial.

Could this ancient animal have been an ancestor of the Giant Rat? One thing’s for sure, it would take more than a bite of cheese to satisfy its appetites.