Mummy Burial of Egyptian Priests Found Together with Afterlife ‘Servants’

Khaled al-Anani, the Minister of Antiquities in Egypt, has revealed that a large mummy burial site has been discovered at Tuna el-Gebel, an ancient necropolis located near Luxor, Egypt on the west bank of the Nile River. LiveScience reports that, so far, twenty limestone sarcophagi have been removed from the ground which are believed to hold high priests from Egypt’s Late Period from about 747 BC to 30 BC including the twenty-fifth dynasty until the Ptolemaic Period of which Cleopatra VIII was the last Pharaoh.

After her end, Egypt surrendered to the Romans. Items found along with the coffins include about seven hundred amulets made of gold and some with precious stones and over ten thousand glazed ceramic shabti figurines to serve the priests in the afterlife. The coffins that have been opened have undisturbed mummies with complete wrappings. 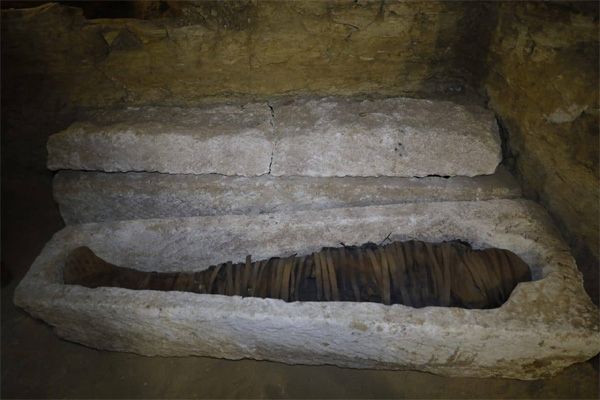 A mummy found in an opened stone sarcophagus is still bandaged and does not seem to have been disturbed since it was buried around 2,500 years ago. The mummy is likely that of one of the high priests or their assistants. (Image credit: Egyptian Ministry of Antiquities and Tourism)

According to Ancient Egypt Online, servants were often buried along with their “masters” during the Early Dynastic Period from around 4,000 to 3,100 BC. It didn’t take long before the ancient Egyptians realized this was an unproductive practice and they began to create Shabti – later called the Ushabti, small figurines to represent a servant associated with a specific task to be performed in the afterlife. It was believed that the sun god Ra, the primary deity of the Egyptians and creator of all things, granted land to allow wealthy Egyptians to continue their lavish lifestyle with servants. 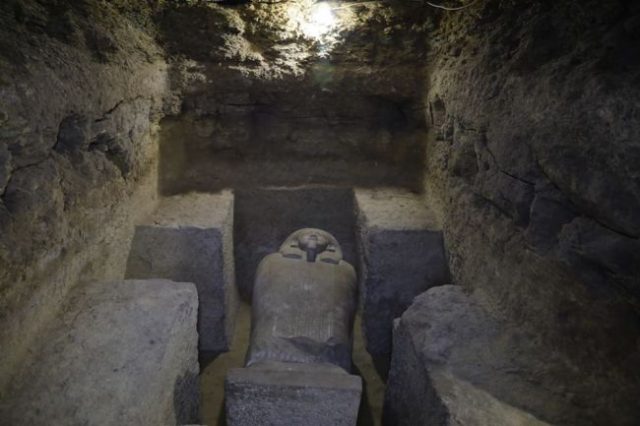 The face of one of the stone sarcophagi discovered in the burial ground. (Image credit: Egyptian Ministry of Antiquities and Tourism)

The Shabti went through many incarnations throughout the history of Egypt. The First Intermediate Period from about 2181 to 2055 BC saw small statues of the person near the coffin along with figures of craftsmen such as bakers and builders carved from wood. Officially, they are not all Shabti because some are representative of the tomb owner, but they show the beginnings of the practice. 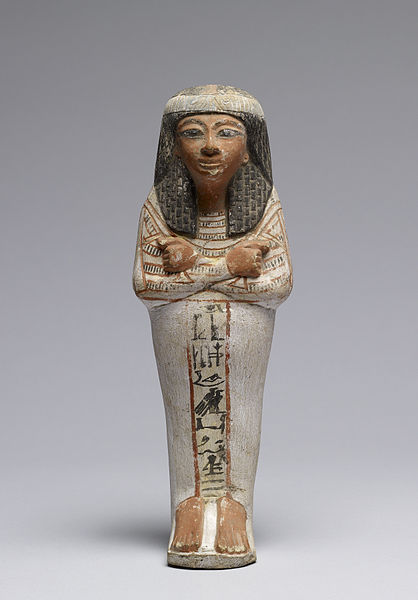 During the Middle Kingdom, from about 1975 BC to 1640 BC, the Egyptians made small statuettes of the servants from wood, wax, clay, or stone which were wrapped and placed into tiny coffins. Tasks were performed by them in the afterlife, but there was only one per tomb. 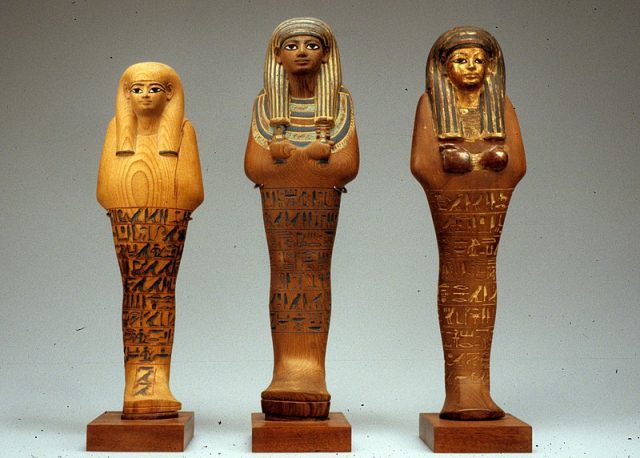 The Second Intermediate period from about 1700 to 1550 BC was a tumultuous time in Egypt with cultural divisions and wars. The Shabti during this time looked more like twigs than people and were inscribed with the earliest Egyptian writings called “Hieratic”.

As Egyptian society stabilized in the New Kingdom, from about 1550 to 1069 BC, Shabti were carved to represent the task for which they were created and were given tiny tools to complete their task. They were made from alabaster, stone, wood, ebony, glazed ceramics, terracotta, bronze, and glass. Most had the name and title of the person they represented inscribed, but some also contained verses from the Book of the Dead or words to worship the Aten, a deified disc of the sun representing the gods Ra, Horus, and Amun.

By the Third Intermediate Period, from about 1069 BC to 644 BC, Shabti were being mass produced from molds. They were called Ushabti from the Book of the Dead and were divided into groups of ten workers with an overseer for each. A total of three hundred and sixty-five workers in mummiform wore tiny black headbands to identify them as servants or, more likely, slaves.

The quality of the statuettes began a downward turn about this time until the Ptolemaic Period from about 323 to 30 BC. At this stage of evolution, the quality was varied. Some had fraudulent hieroglyphics and were poorly made while others were made quite well. The overseer figure was discontinued, and by the time the Romans took over the Ushabti fell out of use.

The area between Cairo and Luxor has several burial necropolises including Tuna el-Gebel, Theban Necropolis, and Asasif where excavations have been ongoing for years. LiveScience notes that important discoveries are being uncovered every season and, according to Mostafa Waziri, the general secretary of Egypt’s Supreme Council of Antiquities, “Excavations are still running. We expect to find more and more and more [discoveries] in this area.”