Tattoos have been around for a long time, we now know that even an ancient Egyptian had them. More recently, after the early 1900s, it seemed as though only military men and prisoners got tattoos in the familiar blue ink. Around the 1990s, tattoos became popular again for both women and men in either black, blue, or brightly inked colors that run the gamut of self-expression.

Throughout the history of human civilization, the practice of applying permanent pigment to the body has represented a variety of things including a person’s rank in society, magical protection, group membership, religious beliefs, in honor of someone or something, to mark a milestone, or just for fun decoration.

With the constant improvements in technology and infrared photography, researchers are now able to photograph ancient Egyptian tattoos without any type of invasion that would damage the deceased and its wrappings. Using that technology, seven “new” ancient tattoos have been seen. Deir el-Medina, an ancient site on the west bank of the Nile River at Thebes in Upper Egypt was once a settlement for the craftsmen who built the tombs in the Valley of the Kings. 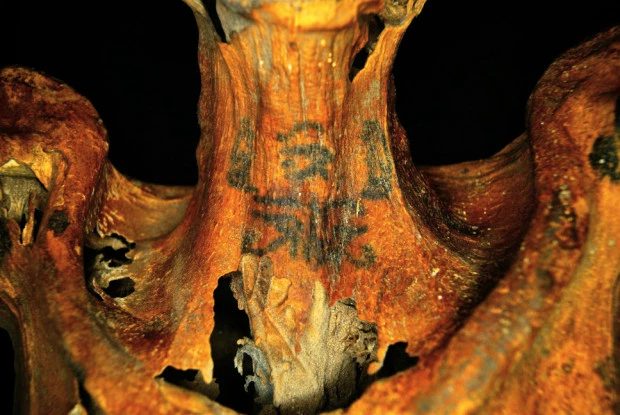 Archeologists found seven 3000 year old mummies sporting some of the earliest known tattoos. Up until that point, only six mummies had been found with tattoos, but with the new technology, mummies in museums all over the world are being scanned and are providing new insights into ancient tattooing. The only mummies in Deir el-Medina with tattoos, so far, have been women. 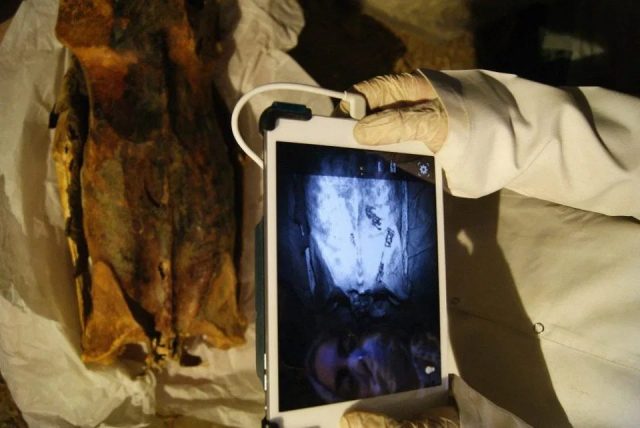 Using infrared scans to look at Ancient Egyptian mummies. The tattoos that were revealed above include two stylized eyes that symbolize protection and a hieroglyph of a bent papyrus plant with water. Credit: Anne Austin / University of Missouri

One mummified woman had as many as thirty tattoos, according to archaeologist Anne Austin of the University of Missouri–St. Louis at the yearly meeting of the American Schools of Oriental Research. In her research statement in the posted abstracts at asor.org, Austin notes that the tattoos were used not only for religious purposes but to “forge permanent, public identities”. 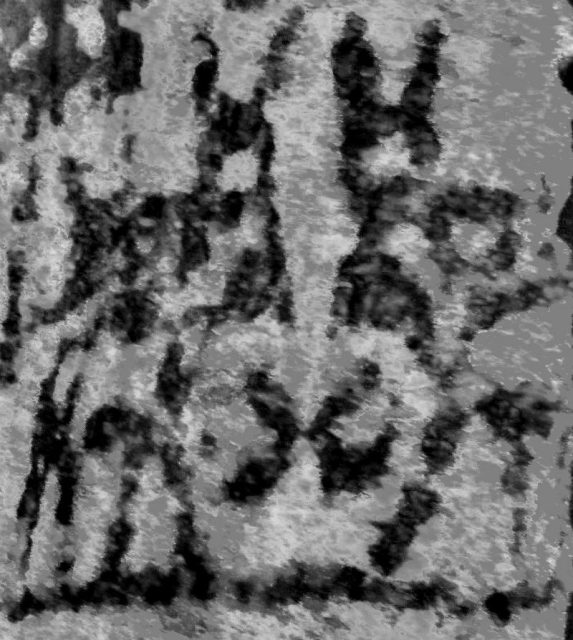 Close up look at the animal tattoos. Credit: Anne Austin / University of Missouri

In 2018, tattoos were revealed on a female and a male mummy from over five thousand years ago in the British Museum in London. The famous iceman, Ötzi, who lived about 3100 BC and whose nearly complete skeleton was found preserved in glacier ice on the Similaun Glacier in the Tyrolean Ötztal Alps, on the border of Italy and Austria in 1991 was found to have sixty-one tattoos. 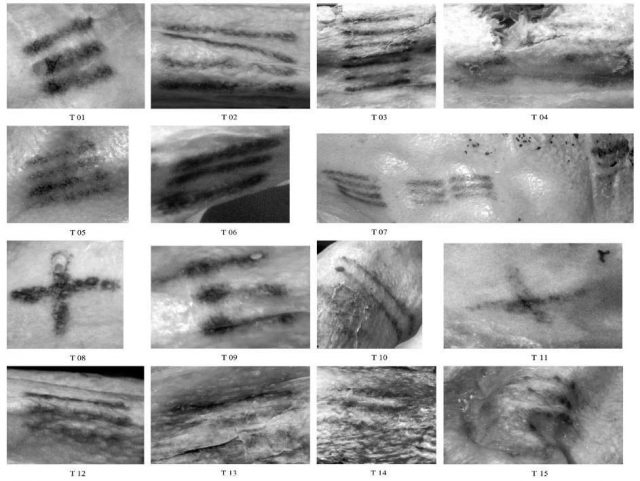 The geometric tattoos of Otzi the Iceman. Credit: EURAC/M.SAMADELLI/M.MELIS

The majority of them consisted of groups of straight lines found mostly on his legs and arms leading his caregivers to believe they may have been therapeutic due to the fact that the lines were usually placed where his bones show degradation. According to Discover magazine, a newly discovered tattoo on Ötzi’s chest has been found where there are no signs of illness or bone wear, but it may have been painful due to conditions that left no scar on the body. It is also possible that the Iceman’s tattoos had nothing to do with health problems and have a totally different meaning, if any.

A little after ancient Egyptian tattoos, Ancient Roman slaves and criminals were tattooed as well. In ancient times, before the use of ink, pigments were made of ashes and soot and sometimes plant materials mixed with oils.

The first tattoo guns were invented in 1891, and before that, simple needles or chisels were used with hammers to pierce the skin, and the ink was chiseled directly into the holes in the skin. Early colors were made from carbon, cinnabar, and cadmium compounds, according to Authority Tattoo.

Recently tattoos which are invisible unless held under a black light to make them glow in the dark have been developed using phosphorus, a toxic chemical element. As most modern inks are vegetable or metal based, many tattooists are hesitant to use a known cancer causing agent not approved by the FDA. UV ink, which does not contain phosphorus, also glows under a blacklight, fluorescent light, and LED lights and can be well tolerated by the body.