The coast of Ireland received an unexpected guest in the form of an abandoned ship lost over a year ago. In February of 2020, winter storm Dennis blasted into Europe with hurricane strength winds. The huge storm covered over three thousand miles of area from Canada to the northern Scandinavian countries. Ireland received winds of up to seventy five miles per hour which created waves well over fifty feet. Riding the waves was the Tanzanian cargo ship, the MV Alta, which was abandoned in the Atlantic Ocean in September of 2018.

The abandoned ship came to rest near the fishing village of Ballycotton, in County Cork, Ireland. The ship became locked into the rocks just offshore and there it sits. According to RTE, marine contractors boarded the ship to see if any environmental concerns needed to be addressed but found only a small amount of fuel in the tanks. Several other tanks will need to be checked after water is pumped out of the area because when it left Greece it had over twenty one thousand gallons of fuel.

According to Vessel Finder, the Alta was built in 1976 for a Norwegian company and named Tanager. It was renamed Pomor Murman and Polar Trader by later buyers. In 2000 it was sold to a Grecian company and sailed under the name Avantis II, then Avantis I. In 2015, Panama’s BTG SG Corp renamed the ship Elias, and, finally, the ship flew under the Tanzanian flag for Alta SG LLC, and the ship was dubbed Alta. 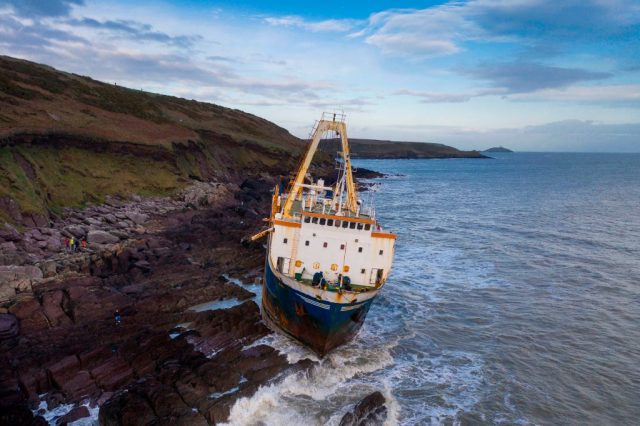 The abandoned 77-metre (250-feet) cargo ship MV Alta is pictured stuck on rocks near the village of Ballycotton south-east of Cork in Southern Ireland on February 18, 2020.(Photo by CATHAL NOONAN/AFP via Getty Images)

In the Autumn of 2018, the Alta began its journey from Greece to Haiti when the ship broke down about one thousand three hundred and eighty miles southeast of Bermuda, and the crew was unable to repair it. The Coast Guard cutter, Confidence, racing thirteen hundred nautical miles to beat Hurricane Leslie, rescued the ten crewmen after twenty days adrift and took them to Puerto Rico, according to Coast Guard News. 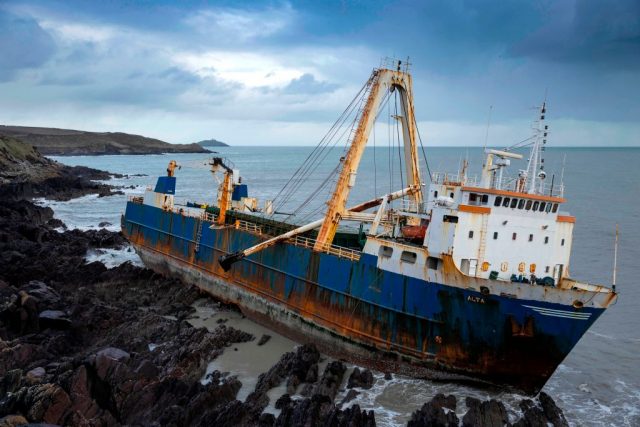 After that, the Alta drifted about on the Atlantic Ocean with no crew. It was supposed to have been pulled home by a tugboat but somehow it never made it. Some reports claim the sea was too choppy for the tugboat while others say the ship was hijacked to British Guiana and then abandoned again. 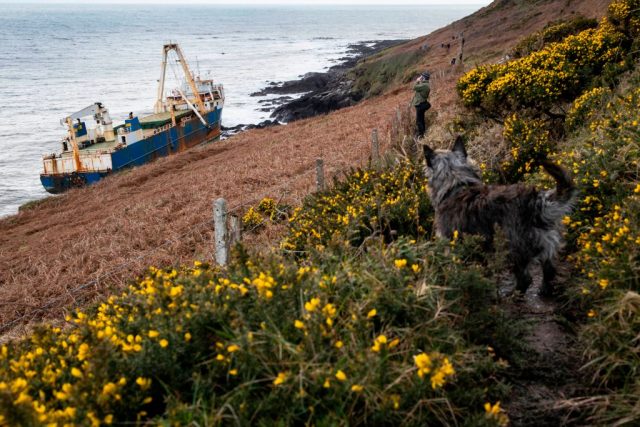 A “ghost ship” drifting without a crew for more than a year washed ashore on Ireland’s south coast in high seas caused by Storm Dennis, the Republic’s coast guard said. (Photo by CATHAL NOONAN/AFP via Getty Images)

The coast guard tracked the ship using reported sightings but after a while there were no sightings, and it was assumed to have sunk. In September of 2019, according to The Guardian, the HMS Protector, a Royal Navy ice patrol ship, reported seeing the Alta in the middle of the Atlantic and attempted assistance, but no one responded to their calls. It is believed the ship drifted along the direction of the Americas then across the ocean, up along Africa, and then headed to Europe where it landed in Ireland in poor shape but, amazingly, still afloat.

A similar incident happened in November of 2019 on the Canadian side of Niagara Falls when a ship that had become lodged on the rocks for over one hundred years was suddenly jolted by hard rain and winds and flipped over, according to NBC News. On August 6, 1918 the iron ship broke loose from its tow rope while dredging near the Horseshoe Falls.

Two men on the ship, Gustav Lofberg and James Harris, frantically tried to slow the boat down but were still on board when the ship plummeted over the falls. The men survived but were stuck on the rocks in the rapids downstream. They were rescued, but there was no way to pull the ship off the rocks, so it sat there like a rusting monument until that November when it moved.

Irish authorities have stressed that the public should not go near any abandoned ship that has washed up on shore of Ireland due to the hazards of a rusty ship that may be falling apart or leaking hazardous materials. The Alta is also in an extremely difficult to access area that would present grave danger trying to navigate the rocky shore on which it is perched.