The 1895 “First Movie Ever Made” Gets Visually Stunning 4K Restoration

It was one of the baby steps of early cinema and many consider it the first actual movie ever made (although there were very short “motion pictures” produced before). Now a silent classic, it has received the mother of all digital restorations. Lumiere Brothers short ‘Arrivée d’un train à la Ciota’ (‘Arrival of a Train at La Ciotat’) has been rendered in stunning 4K, and it’s all thanks to an AI developer.

Denis Shiryaev took the 1895 steam train sequence and gave it the neural network treatment, running it at 60 FPS (Frames Per Second). Put simply, neural networks are computer systems that work like a brain. In another 21st century twist, Shiryaev uploaded the upscaling onto YouTube. His posting has gone viral, with millions of views.

Arrival of a Train at La Ciotat’s original debut became one of the defining moments of movie history. “Filmmakers had to build an audience for the new medium during these earliest years of its existence,” writes the Museum of Modern Art website. “Working within the limits of technology (including heavy cameras) they reproduced live theater entertainments and documented the world around them in brief, filmic bites”. 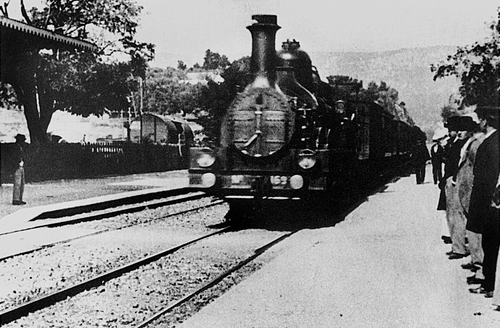 Still from the original 1895 film Arrival of a Train

In seeking to capture everyday life, the Lumieres – Auguste and Louis – gave rise to the film documentary. Shooting on 35 mm, their 50 second presentation reportedly frightened audiences, who believed the locomotive would leave the screen and run over them… though this anecdote may just be a simple case of movie marketing. 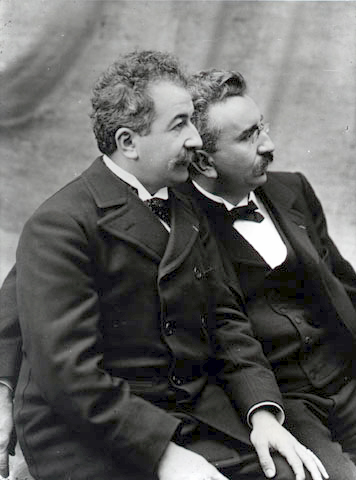 Several networks were employed, together with a couple of algorithms. Topaz Labs’ Gigapixel AI works by “analysing huge numbers of images as they are scaled down, learning what information gets lost along the way”, according to Science Alert. It adds, “With this training to draw on, the AI is able to work backwards to add information as images are scaled up.”

The Depth-Aware Video Frame Interpolation, or DAIN algorithm, was then used. This fills in information by “inserting whole pictures” and “building the frame rate up to a smooth 60 frames per second.” Gigapixel AI, as the name suggests, handles pixels and DAIN operates on a more elaborate scale.

It may sound confusing to the casual viewer, yet the stunning results make it all worthwhile. For extra fun, the AI pro even added a soundtrack. Check out the new version of this classic groundbreaking film below:

Science Alert is keen to point out the already-high quality of the source material. This no doubt had some bearing on the finished product. And while AI is enabling filmmakers to realize impossible dreams, the process is still relatively young.

“Bear in mind that the extra details you’re seeing in this restoration may not actually be what was really in the footage, down to the last pixel,” the site notes. It speculates the revamped film is made up of “the best guesses of computer algorithms trained on vast libraries of similar photos and videos.”

The original version of the film without any of the updates is here:

By producing a brand, spanking new vision of the past, Shiryaev also throws a spotlight on the history of motion pictures. The Lumieres were inspired by Thomas Edison and his Kinetoscope. Edison’s device provided visitors with a game-changing peepshow, as they peered down into a cabinet to watch film action unfold.

This led to the French brothers’ developing their own motion picture camera, printer and projector all in one unit. “One year later, in 1896,” MoMA writes, “they set up the Cinématographe in the back room of a Parisian café and projected their films, creating the world’s first movie theater”.

Various names were involved in the creation of cinema as people know it today – the Lumieres and Thomas Edison are just two! The little known name of Louis Le Prince is perhaps the best candidate though for the title Father of the Motion Picture as he produced a seconds-long “movie” all the way back in 1888. The story of his mysterious disappearance is below:

The legacy of moviemaking’s early days is preserved in this latest release, however some worry about the implications of AI and its reality-bending nature. Film purists may object to a computer’s take on an iconic 19th century movie. Yet they also have the opportunity to glance back into another world, in extraordinary high resolution detail. That original sense of wonder is hard to recreate, but maybe this video comes close.