The Election of 1800 between Jefferson and Adams was one of the most heated in American history. How did 2 boys from the 1950s come to discover a turn-of-the-19th century Presidential relic from this intense and pivotal moment? The Smithsonian Institute has been unfurling the truth behind this fantastic story.

60 years ago, a 14 year old named Craig Wade from Mansfield, Massachusetts was hanging out by the railroad tracks in Pittsfield. With him was younger brother Richard, 11. They were visiting relatives and were probably bored. Things were about to get exciting, for historians at least. Quoted recently by Smithsonian.com, Craig revealed “I saw a box you know, kind of beside the railroad tracks on the bank, and so I opened it…”

What he found inside was an old cloth flag, or to be more precise a banner with an image of Thomas Jefferson on it. Dating from the heated 1800 election between Thomas Jefferson (Democratic-Republican) and John Adams (Federalist), it presented the former’s victory in no uncertain terms.

The National Museum of American History – where the banner now resides – describes it as “one of the earliest surviving textiles carrying partisan imagery, created at the dawn of the first American party system in which power passed from Federalists to Jeffersonian Republicans.” 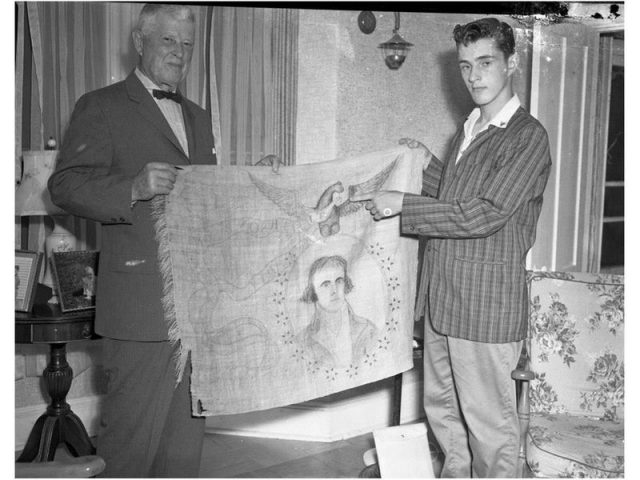 Clarence Barnes and Craig Wade with the banner in the Wade family home. (National Museum of American History)

This contest was what’s known as a “realigning election”, which heralds dramatic changes from one administration to another. Flying above a portrait of Jefferson is an eagle, which in its beak holds a streamer reading that “John Adams is no more”… at least in a political sense!”

It marked the end of a bruising battle between the pair. “The candidates’ campaigns were so contentious in their rhetoric and accusations that historians often referred to them as an extreme example of how low presidential contests can be” writes Smithsonian. 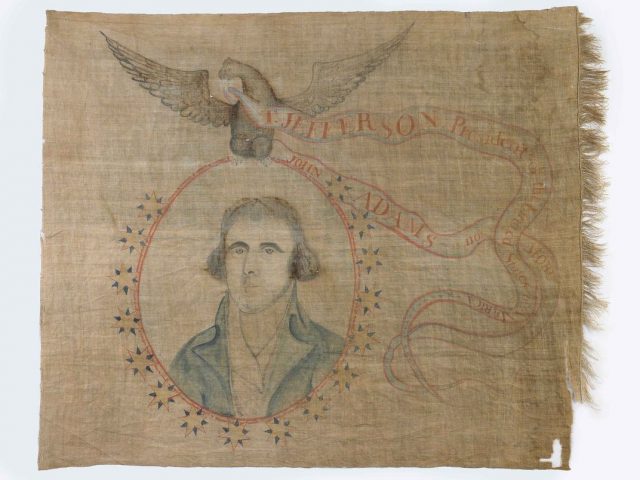 The young Craig’s reaction was pretty straightforward. Reminiscing over the day in question, he says “I picked the flag up, I go, ‘oh, this is cool.’ My brother Ricky he was throwing rocks or doing whatever, and so I put it in my jacket and went about my business… I think it probably fell out of a vehicle, if I had to guess.”

Some time passed before the family and others realized what the boys had stumbled upon. Craig put the banner on his wall and no-one was any the wiser. He then wound up mentioning it to his teacher Mr. Serio, who was in full flood telling his 8th grade students about the American Revolution. 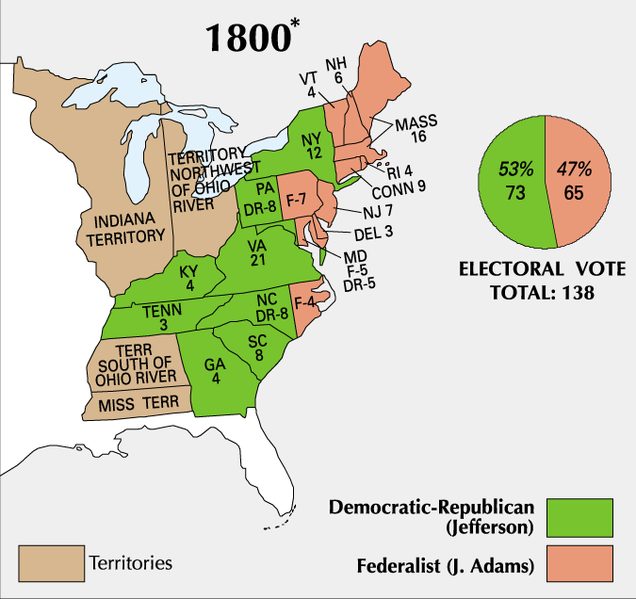 Electoral outcome of the election of 1800.

“I raise my hand and go ‘Hey, Mr. Serio, I found a flag this summer with Thomas Jefferson on it,’” Craig recalls, “and I thought his teeth were going to fall out… So I brought it into school the next morning, and I thought he was just going to pop. He just, you know lost his mind when he saw this thing…”

It was arguably the most spectacular show and tell in US education history. Richard also showed his class, generating further buzz. The word was out that the school had a prized relic on its hands. Experts pored over the evidence and concluded it was genuine. Now all that needed to happen was for the relic to change hands. But who would it go to, and for how much? That dilemma was placed squarely on the shoulders of Shirley C. Wade, the boys’ mother. 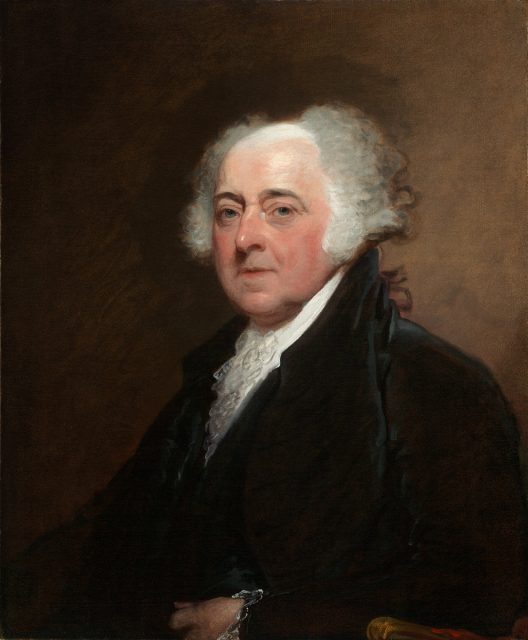 “Newspaper reports said she was offered between $50 and $100 initially but was also told that her find was difficult to price since it was incredibly unique” says Smithsonian. She eventually wrote to their Institution with a view to selling Jefferson’s banner in 1959.

The Smithsonian spent the next couple of years trying to buy the banner. Ralph E. Becker, an attorney from Washington and friend of the Smithsonian, finally purchased the item for $2,000. He promptly donated it to the Museum, where it’s remained ever since. Craig’s cut of the proceeds was $25, which he used for a trip to Canada.

Proud of their acquisition, the Smithsonian filed away the banner and the Wades’ involvement faded into the distance. Then in 2018 the Institution decided to flesh out the story and track the brothers down online. They found Craig living in Alaska, where he’d retired from a military career. Strikingly, neither he nor ex-serviceman and policeman Richard thought much about the affair over the decades.

“We never really thought too much of it being so young,” comments Richard. News of the banner’s significance is met with a simple “Well that’s nice to hear…. It was kind of forgotten… It’s nice to hear it’s such a treasure, and it’s nice being part of something like that. A story to pass on.”

Related Article: Thomas Jefferson Showed his Distaste for the British in Peculiar Ways

Some say the scramble for the White House can be childish at times. But it took a pair of actual kids to rescue precious campaign literature from their country’s turbulent past…!