First Ever Animal Discovered that Doesn’t Need to Breathe

A newly-identified parasite has scientists amazed at its ability to live without breathing. There are certain things that we have always believed to be absolutely true.  One of those things is that all living things have to breathe in order to survive.

However, the universe is much more complex and mysterious than we know, and recently, that particular belief was shattered when scientists discovered that there is one species of microscopic parasite which not only doesn’t have to breathe, but couldn’t, even if it wanted to.

According to a new article in Live Science, a tiny parasite called Henneguya salminicola, which sinks its spores into fish, does not, in fact, need to breathe.  Which makes it the first known “animal” that doesn’t need to. That probably shouldn’t come as a huge surprise, given that the parasite’s preferred environment is in the muscle tissue of fish and underwater worms, which is hardly a climate rich in oxygen.

Every other multi-cellular animal on Earth whose DNA has ever been studied all possess the genes for some sort of respiration, but this little parasite does not, according to newly published research in the Proceedings of the National Academy of Sciences. 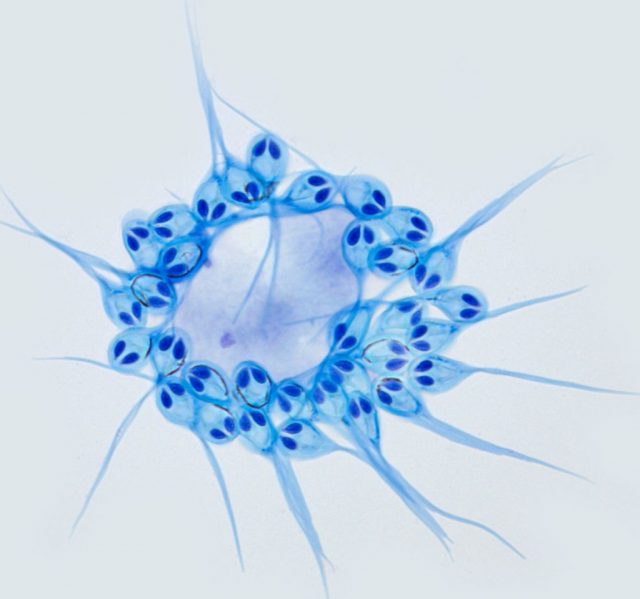 As you may remember from biology, mitochondria in our cells are responsible for producing around 90% of the energy the body needs for sustaining life and organ function, or so we have long believed. What makes this particular creature completely different from all other animals is that it lacks a gene for mitochondria, and the mitochondria are what hold the genes for breathing.

The parasites are from the phylum Cnidaria, which makes them distant relatives of animals such as sea anemones and jellyfish. They may have originally been more like those creatures, but they ended up evolving in a different direction, shedding muscles, nerve cells, and size along with shedding the need for oxygen.

Considering that perpetuation of species is the evolutionary imperative, scaling down has worked out well for H salminicola, allowing it to reproduce early and often, and stripping away everything that isn’t essential for its survival and propagation from its genes.  It’s a member of the myxozoa class, which have some of the smallest genomes of all animals. 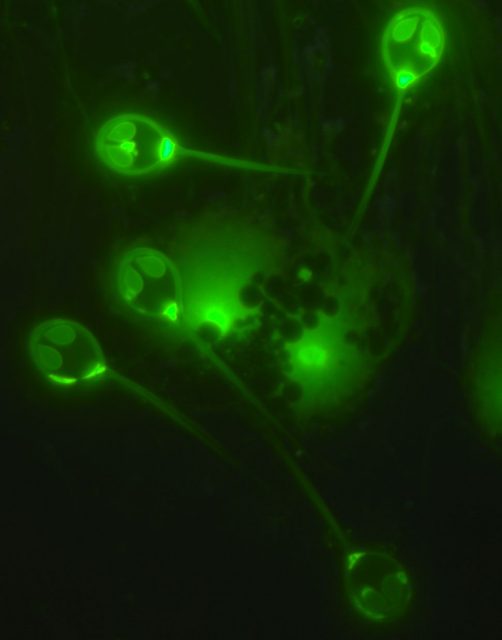 Where most animals evolve in a way that has them becoming more and more complex, and therefore more adaptable and likely to survive, H salminicola ended up taking the opposite tack, almost becoming single-celled. This particular species of parasite doesn’t do too much damage to its hosts, relatively speaking, but other parasites in the same class have wreaked havoc on fisheries.

Fish who have been infected with this particular little creature are said to have ‘tapioca disease,’ because when H salminicola pops out of its hosts bodies they look like white bubbles, they just appear to be unicellular blobs.  Their spores, however, are a different issue.

When you look at the spores under a microscope, they resemble tiny tadpoles, but with two tails and large, rather disconcerting “eyes.”  They begin their life as free-swimming spores, until they find an acceptable host.  The stinging cells allow them to latch onto the fishy host, and then they burrow their way deep into the host’s muscle tissue.

Related Article: This Tiny Insect Contains the Only Mechanical Gears Ever Found in Nature

Other animals breathe to get oxygen, which in turn powers the mitochondria in our cells to create something called an electron transport chain.  That chain produces adenosine triphosphate (ATP), which is the carrier for the energy that makes most cellular biological processes happen. No breathing equals no oxygen, no ATP, and ultimately, no life.

Even H salminicola requires ATP in order to survive, but researchers still aren’t entirely sure how they get it.  They may be able to get small amounts of ATP from other processes, or they may be able to leech it directly from their hosts, but, clearly more research needs to happen to figure out the answer to that question.