Historic children’s books teaching manners are now digitized and entering the 21st century. In an ambitious attempt to inspire young minds, the British Library has unveiled a mind-boggling online resource.

Discovering Children’s Books is a joint project with Newcastle University, Oxford’s Bodleian Library, the Victoria & Albert Museum and the National Centre for Children’s Books (Seven Stories). It has digitized a raft of goodies spanning the centuries. These include classic drafts of The Famous Five by Enid Blyton and early sketches of the Gruffalo by illustrator Axel Scheffler – the design of which was toned down before publishing.

The free collection of digitized manners books numbers over 100 items. According to the project’s website, this unique resource “provides access to some of the earliest printed works created for a young readership and an array of movable, miniature, noisy and toy books, propaganda stories, comics, poems and fairy tales.” 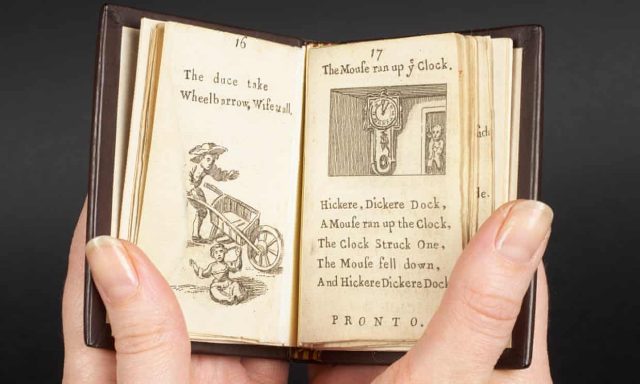 Speaking to the Guardian, Anna Lobbenberg of the British Library reveals that “Some of these sources will seem fascinatingly remote, while others may seem uncannily familiar despite being created hundreds of years ago.”

Particular attention of the digitized manners books has been paid to ‘The Lytille Childrenes Lytil Boke’. This catchily-titled tome dates back to the late 15th century, and is what’s known as a “courtesy book”. The British Library explains that this volume would be “useful for children and families who aspired to join the nobility or find work serving at the royal court.” 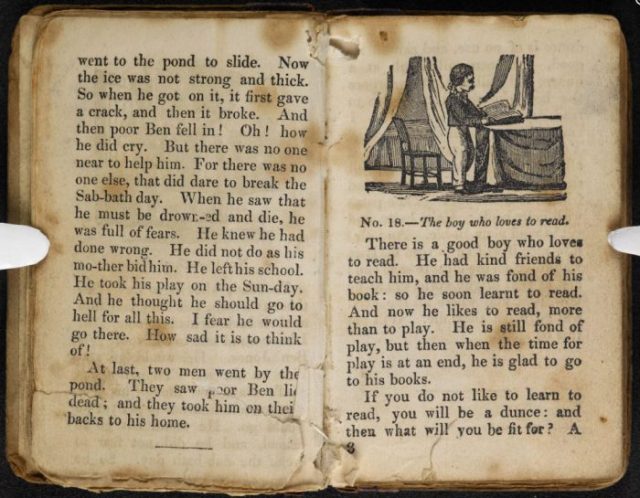 The little book pre-dates the printing press, which standardized spelling. Written in Middle English, it’s understandable but contains obsolete words plus ones that have altered in meaning. “It was likely part of a larger set of work designed to be used by the whole family,” writes the Daily Mail, “including texts on hunting, carving meat, medicine, blood-letting and English Kings.”

Issues of the day were also committed to print. Kathleen Ainslie wrote Suffragette movement tale Votes for Catherine Susan, and Me in 1910. “Catherine Susan, and Me, are two peg dolls,” describes the Guardian, “who join the campaign, fighting policemen, smashing windows, going to prison and going on hunger strike.” It is “the only book about suffragettes written for children during the Votes for Women campaign”. 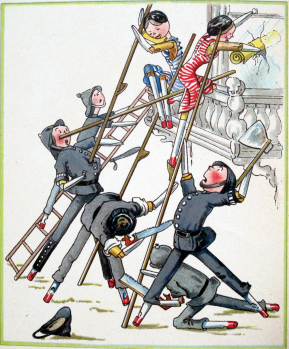 Illustration fromVotes for Catherine Susan and Me. British Library

The collection goes back 2,000 years for an ancient relic from Greek schooldays, “a 2,000-year-old homework book created on two wax tablets” writes the Mail. “The teacher has written two maxims in the wax at the top ‘accept advice from someone wise’ and ‘it is not right to believe every friends of yours’ which the student had to copy out twice below.”

On a more severe note, crime and punishment is bizarrely explored in a 1786 book about trials for juveniles. “The fictional trials overseen by a tutor and governess include stealing apples to squabbling over sweetmeats and they are tried by their peers.” 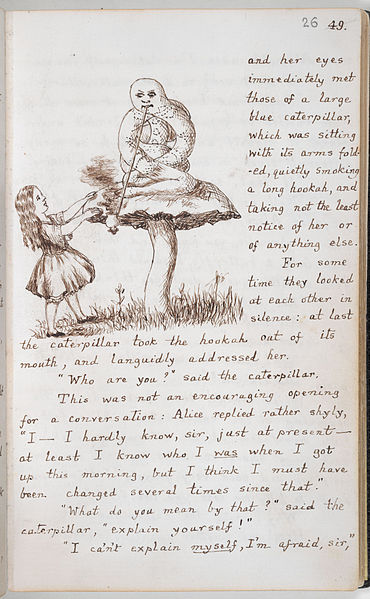 A handwritten page of the original manuscript of Alice’s Adventures Under Ground, illustrated by the author. Held and digitised by the British Library.

Another priceless literary treasure is Alice’s Adventures Under Ground by Lewis Carroll, the early manuscript version of Wonderland. Edward Lear’s legendary limerick volume the Book of Nonsense exists online in a 3rd edition dating to 1861. The previous 2 editions carried the name Derry Down Derry, the author’s pseudonym. This one credits Lear for the first time.

Related Article: The Children’s Book Every Kid Dreaded in the 18th Century

By opening up the surprisingly varied history of children’s books, the British Library and their partners hope to honour the past whilst nurturing the future. A future Roald Dahl or J.K. Rowling might well take their first steps toward fame via this amazing online portal…