Fancy a night at a haunted hostelry? The Mermaid Inn, centuries old and found in the English town of Rye, might be just the ticket.

Current owner Judith Blincow offers all mod cons, from a hearty breakfast to wi-fi. But others from a less civilized age lay claim to the property, described by the Telegraph as a “medieval mantrap of smugglers’ tunnels, priest holes and spooky resident spectres”. These voices may have been laid to rest over the years, but their presence is felt in the very foundations!

Is the Inn on Mermaid Street one of the most haunted hotspots in Britain? Take a closer inspection and the evidence seems to pile up… 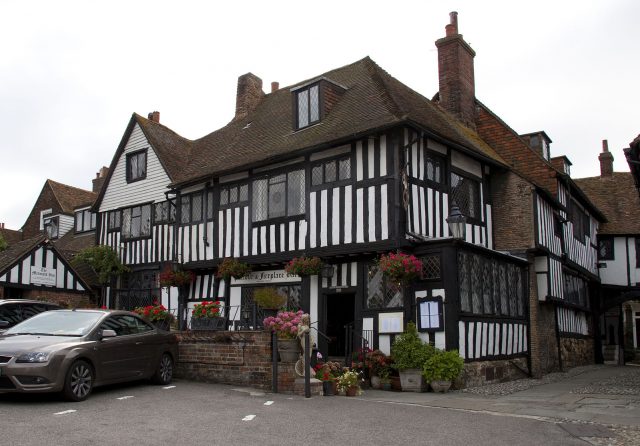 This Grade II listed building has been in existence since around the 12th century. “The dating varies,” says All That’s Interesting, “but a popular notion is that the stone cellar dates all the way back to 1156.” However, history has a habit of being cruel. In 1377 the then-hated French had Rye in their sights. Just days after Richard II took charge of the country, his enemy across the Channel launched a devastating attack. 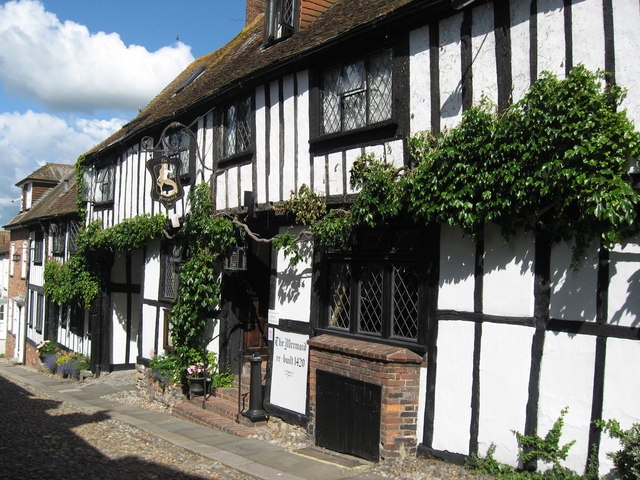 Exterior of the Mermaid Inn. Photo by Richard Rogerson CC by 3.0

“They sacked and burnt until only the four stone buildings of the Church, the Monastery, the Rye Castle and the Friars of the Sack were left standing within the town,” writes the website of Rye Museum. “The Church bells were stolen and citizens done away with.” The bells were recovered the following year, with one set as a warning should the town come under threat again. 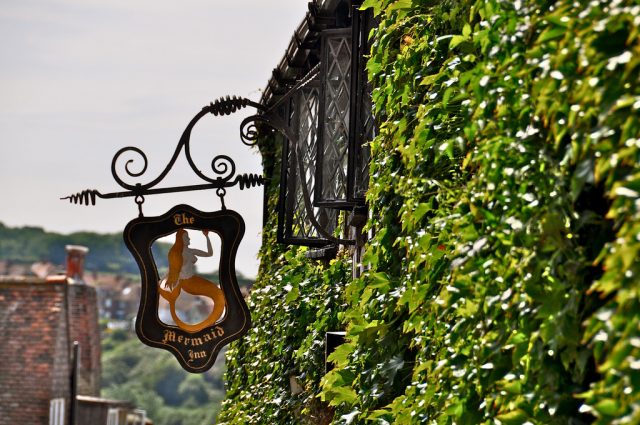 1420 saw the Inn put back together in the form customers know it today. Mermaid Street was christened the following century, a historic rebranding exercize due to the watering hole’s popularity.

With so much turbulence, it isn’t surprising that restless spirits are thought to roam the Mermaid’s rooms, 31 in total. Its most famous occupants were arguably the Hawkhurst Gang. Ruthless smugglers, they honed in on the Mermaid as the perfect venue for getting up to no good. 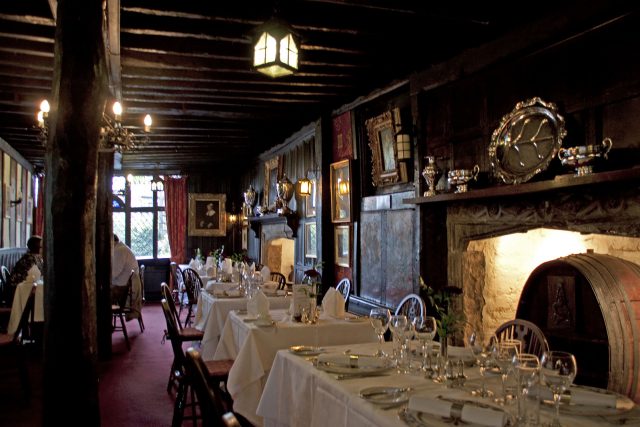 Dining Room at the Mermaid Inn. Photo by Tony Hisgett CC by 2.0

Why Rye? The town was kind of above the law, as it supplied ships to the Crown. Its importance for military and trade meant it was untouchable. So a rogue’s gallery hoved into port. The Hawkhurst Gang “terrorized southeast England from 1735 until 1749,” says All That’s Interesting, “and they intimidated other guests at the Inn by drinking with their loaded weapons on the table.” They went a lot further than intimidation though. The Gang once buried an official who crossed them, alive no less! 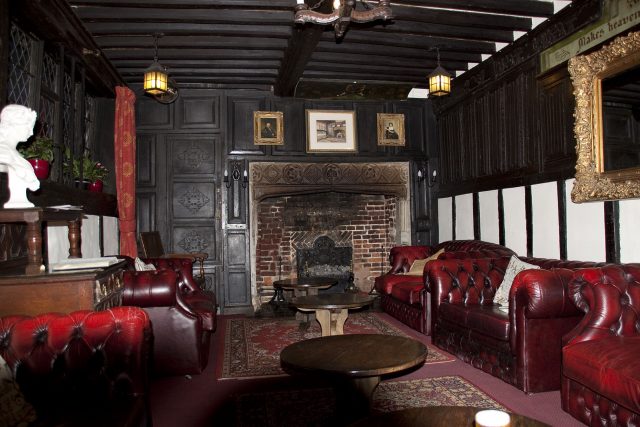 Lounge at the Mermaid Inn. Photo by Tony Hisgett CC by 2.0

The Hawkhurst mob were as crafty as they were mean. “There are a myriad of secret tunnels,” writes the Mermaid’s website, “including one which ran from the cellars to the Old Bell Inn (built 1390) in The Mint, a street which runs parallel to the north of Mermaid Street. A revolving cupboard at the end of the tunnel in the Olde Bell would then be used by the gang for a quick getaway.” 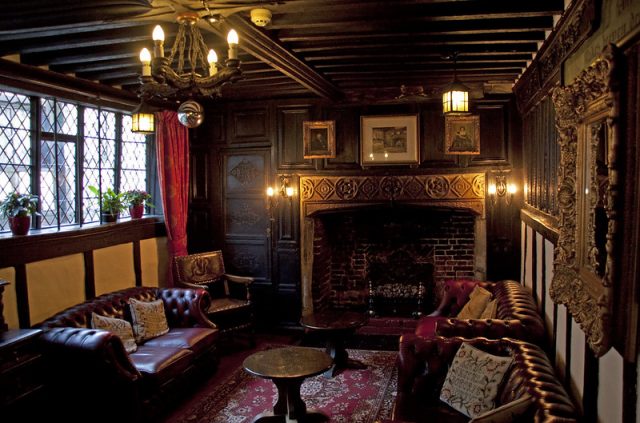 The Lounge. Photo by Tony Hisgett CC by 2.0

One gang leader, Thomas Kingsmill, met his ignominious end in 1749, one year after his partner Arthur Gray. Kingsmill is just one of the ghosts believed to be wandering the Mermaid’s corridors. Or to be more precise, sitting in the rocking chair of room no.17.

Accommodation at the Inn is comfortable, but maybe not for the faint-hearted. Watch out for room 5, where the maids were so frightened they’d enter in pairs. This was because one of their number was done in by a smuggler after she reportedly blabbed about his nefarious exploits. 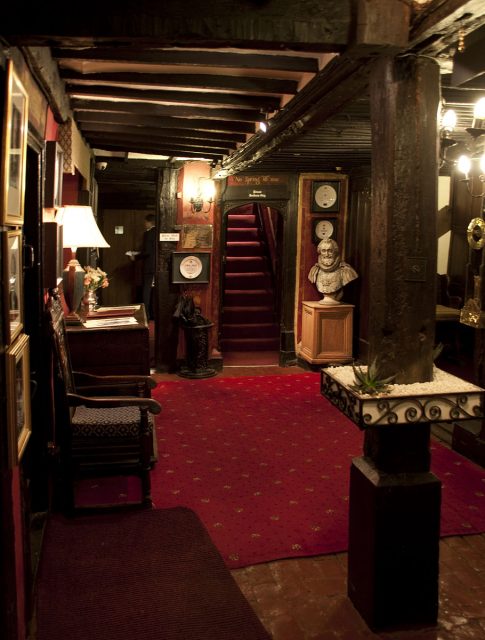 Entrance Hallway at the Mermaid Inn. Photo by Tony Hisgett CC by 2.0

There are men who take strolls through the walls and ghostly women who rearrange items of clothing, some of which end up drenched in water. All That’s Interesting refers to the James Room, where a snapper was startled to see “strange, unexplained orbs floating around the room” in their photograph.

The James Room is named after former Mayor of Rye Charles James. But there was also local figure Henry James, author of The Turn of the Screw and other hair-raising literary classics. The Mermaid Inn lies just 100 yards from the writer’s former home Lamb House. Was Mr James inspired by the area’s eerie vibes…?

The Inn’s scariest room is also the most appropriately titled – Dr Syn’s Bedchamber. Syn was the main character – a smuggler naturally – in a series of books by Russell Thorndike. “Apparently the inn’s most haunted room, it has a secret passageway hidden behind a bookcase which leads down to the bar” notes the Telegraph. It adds, “Once during a séance, Judith and others witnessed various spooky encounters, including the clashing swords of two men fighting.”

Judith Blincow has owned the Mermaid since 1993. It had been closed since 1770, giving spooks plenty of time to get the run of the place. By all accounts, she’s doing a good job keeping them in check and providing a first class service!

Not surprisingly the Inn has featured on popular TV ghost-hunting series Most Haunted. It also found a degree of fame through its appearance in 1983 pirate comedy Yellowbeard, starring Graham Chapman and Marty Feldman.

“Throughout its long history, the Mermaid Inn has been visited by and welcomed many notable people,” writes Atlas Obscura, “including Johnny Depp, Judi Dench, Andy Garcia, Pierce Brosnan, Charlie Chaplin, Lord Alfred Douglas, Ellen Terry, Elizabeth Bowes-Lyon, and even Elizabeth I.” The Queen Mother laid one of her many hats at the Inn in 1982.

A must-visit location for supernaturalists and leisure seekers alike, the Mermaid Inn should help keep Rye on the map for generations to come.