In 2017, near Perth in Scotland, road workers found an ancient monolith which has a carved curious-looking figure of a human with a spear. It was found 300 feet underground while new roads were under construction. The rock measures about six and one third feet by two feet wide and weighs almost a ton. While the carving is hard to see in some places, 3D photography has brought the image out so it can be better studied.

The figure is obviously a warrior wearing a helmet; he was sturdy and stocky with a slightly protruding belly and a “doorknob” or pronounced butt, according to Cambridge Core. The rock, dubbed the “Tulloch Stone”, is dated to the first millenium and was found near a ring ditch which may have been a burial ground that was destroyed in the 1980s when a new stadium was built.

The figure is believed to have been carved by someone from the Pict Tribe, the earliest inhabitants of Scotland. Pictish folklore says they were descended from the Celtic goddess Brighid with the lineage following the maternal line. Supposedly, Brighid was descended from an ancient fairy race of Ireland, the Tuath de Danaan. According to The Scotsman, her name was the foundation of the name of Britain. 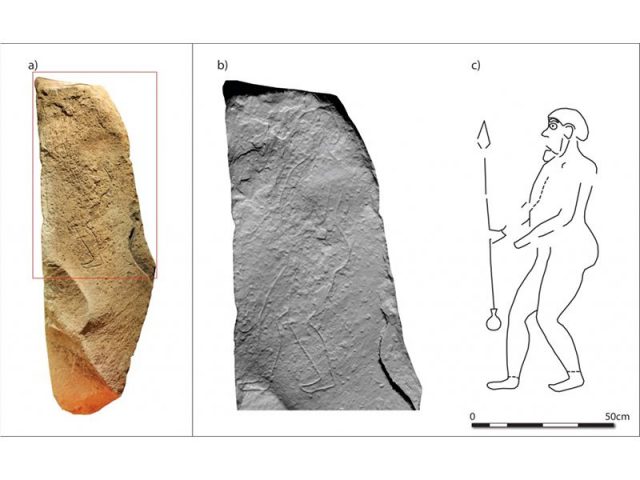 The warrior carved onto the Tulloch Stone wields a spear with a “kite-shaped blade and a doorknob-style butt”. (University of Aberdeen)

Not much of the Pict’s history is known other than names of the kings dating back to about 300 AD. The Picts were strong enough to fight off the Romans but had repeated battles with the Angles. When King Kenneth I took power in 848 AD, he had the Pictish King Drust IX and his noblemen done away with, effectively wiping out the Picts.

After several generations, the Pictish church, language, and culture had all but disappeared. According to Medievalist.net, Dr. Jim Wilson, of the University of Edinburgh’s Usher Institute and MRC Human Genetics Unit, has created a map of the genetics of Scotland and has determined that at least ten percent of the males of Scotland carry Pictish DNA. 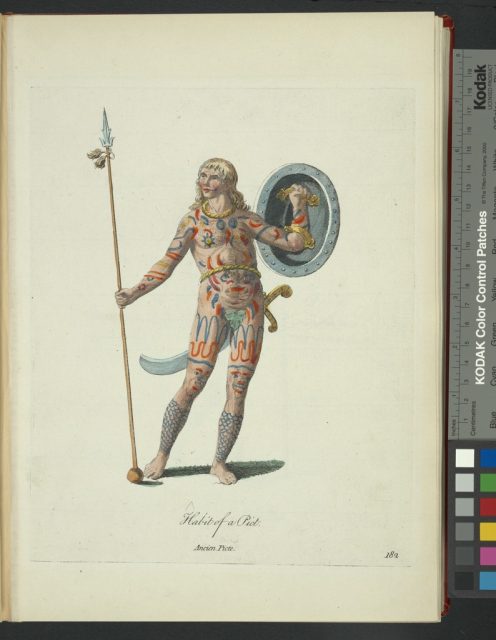 Depiction of an ancient Pict from present-day Scotland

While there are plenty of examples of Anglo-Saxon burials with weapons that attest to a warrior type culture, Dr. Mark Hall, archaeological curator at the Perth Museum on Smithsonian Magazine, believes that type of culture didn’t evolve in the same way in Scotland until after the Roman’s attempted conquest. The continual conflict appears to have influenced the Pict culture and led to the more hierarchical, warrior focused social organization of the latter Pict period. 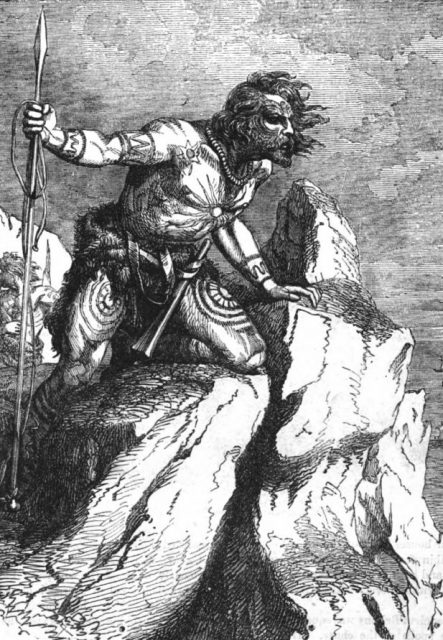 There are several other Pictish stones found in Scotland. Undiscovered Scotland describes three that were found in Aberdeenshire in the small village of Rhynie. The largest, at just over four feet tall depicts the head of an animal, most likely a seal or otter, along with a symbol found to be common among Pictish stones, a double disk and a Z-rod.

It also has several abstract symbols and a carving of a mirror. The smallest stone may be a piece broken off of a larger stone and displays carvings of a beast, a comb, and part of a curvy symbol. A few yards up a hill the Craw Stone can be found, and the most famous Pictish stone, the Rhynie Man, is located at the headquarters of Aberdeenshire Council on the edge of Aberdeen. More stones are in the garden of Leith Hall, a country estate in Kennethmont built in 1650.

The Tulloch Stone is reminiscent of two other carvings in particular, according to Cambridge Core. The Rhynie Man is a human figure with the same style of body as the Tulloch stone figure but holding a spear and a shield, and he has some sort of neck adornment, but the carving is too faint to determine exactly what it is.

The ancient monolith was found near a 5th to 7th century stone burial cairn in the 19th century and is about four and a quarter foot tall. The Collessie stone, found in 2017 by highway construction workers in a field at Melville Home Farm about a half mile east of Collessie, depicts another similarly styled human figure with a spear and a shield.

The Rhynie and Collossie figures both have symbols below their feet. Although unclear, it is possible that the symbols are names of specific individuals. Another theory is that all three figures may instead represent ancient heroes, social groups, or gods.