Two of Harry Houdini’s escape devices, including the infamous underwater crate, have just sold at auction. Harry Houdini could escape just about everything. He made his way out of prisons, underwater packing crates, and a milk can filled with water, just to name a few. He was so adept at escaping from handcuffs that he began calling himself Harry “Handcuff” Houdini and, as seen at National Archives, he even signed his first world war draft card using that name. During his show business career between 1891 and 1926, he acquired or built many props to make his act exciting.

On March 6, two of Houdini’s show items went on auction at Bonhams. The first, Lot 60, a “magician’s steel crate”, also known as “the iron box” was expected to bring between fifty to seventy thousand dollars. The second, lot 61, was a milk can with a trick lid used in Houdini’s famous milk can escape. 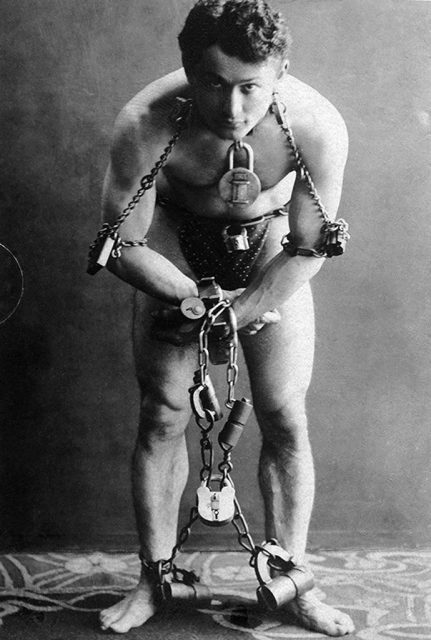 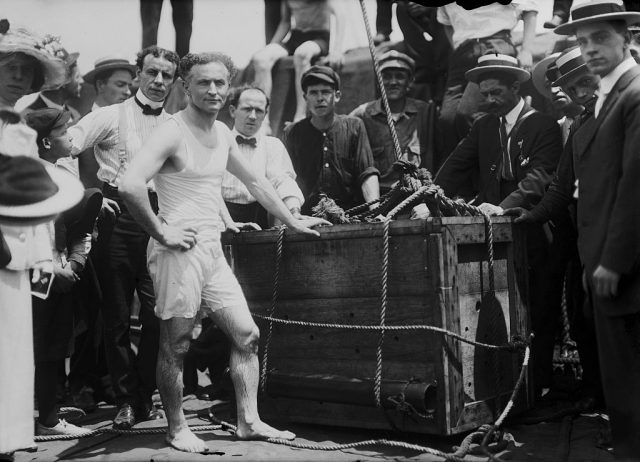 Harry Houdini performs his famous stunt whereby he is submerged in the East River in a crate, New York City, 7th July 1912. He escaped in just under a minute. Houdini’s underwater crate. (Photo by FPG/Getty Images)

According to Bonhams, the magician’s crate was used for underwater escape acts and has a hinged lid. It measures twenty-eight by twenty-eight by thirty-six inches. The sides are covered with round half inch holes and the bottom is a trap door. The top is held down by three padlocks. For a time, it was on display at the Houdini Magical Hall of Fame in Niagara Falls, Ontario, Canada. 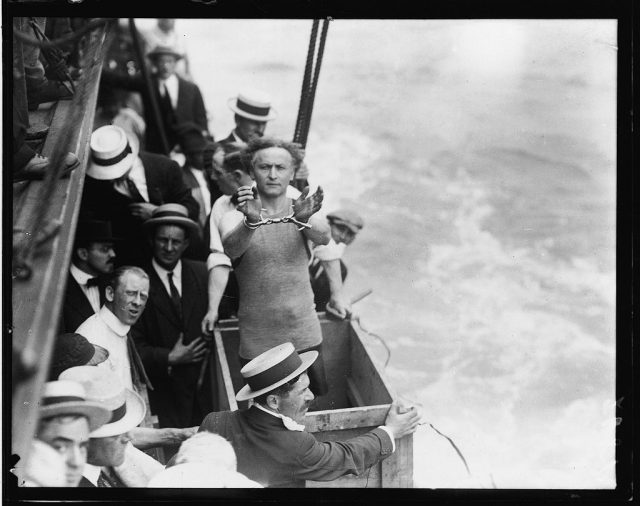 Harry Houdini (1874 – 1926) shows his handcuffs as he stands in a wooden box on a boat and prepares to be submerged, a predicament from which he will escape to the delight of onlookers, East River, New York, July 7, 1912. Houdini’s underwater crate. (Photo by FPG/Getty Images)

It was originally purchased from Houdini’s widow, Bess, after his passing in 1926 by Joseph “The Amazing” Dunninger, an illusionist and admirer of Houdini. He offered it for sale in 1930 for one hundred and seventy-five dollars. There must not have been any takers, because he offered it again in 1938. The crate, on loan from Dunninger, appears in the 1953 film, Houdini starring Tony Curtis.

The milk jug is described as a white vessel, thirty-five inches high by twenty-six inches in diameter narrowing at the bottom to twenty-two inches. It has three or four wingnuts on the bottom and two false hasps at either side of the neck. The lid is a rounded dome with four padlock hasps to attach it to the jug. Included papers identify it as the prop used in the Double Fold Death Defying Water Mystery in which Houdini was sealed in the milk jug full of water which was then placed into a wooden crate with only moments to escape before drowning.

The jug was given to Houdini’s brother Theo, “The Magician Hardeen”, and, in the 1960s, it was sold to Sidney Radner to be placed in the Hall of Fame. In 1997, the jug was sold again to Tom Thayer, and he sold it to the current owner. The accompanied box was sold to Jack Lawain of Illinois who in turn sold it to Radner for the museum. 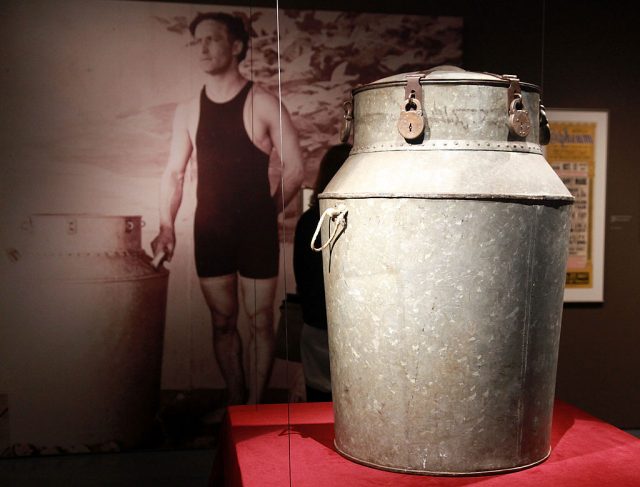 A Milk Can used by Harry Houdini. (Photo by Astrid Stawiarz/Getty Images)

Bonhams is no stranger to sales of Houdini’s props. In December of 2018, Bonhams auctioned a collection of his shackles and handcuffs which sold for thirty-five thousand dollars, and, according to Bonhams, a bonus DVD of the film, Houdini, came along with all of the sales regarding the famous magician.

In March of 2019, a printed handbill entitled, Houdini the Hand-cuff King Defied! Challenged by Brill Brothers’ Shipping Clerks sold for five hundred and ten dollars, and a hand tinted and signed photo of Harry from 1920 went for two thousand one hundred and thirteen dollars. In February of 2019, Bonhams offered one of the green canvas sacks used by Houdini and Bess in their The Metamorphosis trick in which, according to The Great Harry Houdini, Houdini’s hands are tied behind his back and he was placed into the bag which was tied by a knot. He was then put into a box which was strapped and locked.

Related Article: Houdini’s Mysteries – Everything you didn’t know about the Greatest of Magicians

After Bess clapped three times, Harry would emerge from behind the curtain, and Bess was gone. When Harry opened the box, Bess was inside the bag with her hands tied behind her back. The bag was gifted to one of their mutual friends by Theo who kept it in their family until the auction. The auction house has also sold numerable ephemera including books and pamphlets written by Houdini, autographed photos, and handbills of the performances.