What were 2 US Army bombs doing stuck in a hawaiian volcano? Mauna Loa is one of 3 volcanoes there classed as active. Bombing an active lava spewer doesn’t seem to make sense! However the unexploded objects were part of an elaborate operation to save a community. How so?

If it wasn’t for a random hiker checking out the Mauna Loa Forest Reserve last month, they might never have been reported on in the first place. Kawika Singson is an adventurer and media personality who hosts the series Everything Hawaii. And he certainly saw everything that day!

These tunnel-like formations occur when a hardened crust develops over a low viscosity lava flow. Once the flow has dispersed, the crust remains as a kind of roof. And stuck in the roof were 2 rusted bombs from the US Army Air Corps. 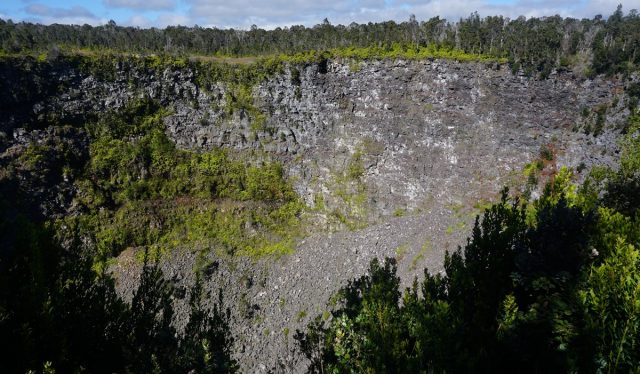 It was an extraordinary yet unnerving moment for the intrepid host. West Hawaii Today reports: “Singson said he saw the back end of the bomb sticking out of the lava, and wondered if it had gone through the wall of the lava tube. When he entered the tube, Singson saw the front end protruding through the ceiling. His thought? ‘Oh my god, that bomb’s intact.’ That’s when the gravity of the situation hit.”
How did the bombs get there? Singson had an inkling due to his military training and knowledge of the “Big Island”’s history. He took some photo and video so his discovery could be shared on social media, then got out the way quick!

So what was the story? Clearly they were dropped by the Americans… but why? The answer stretches back to the 1930s and an audacious idea from a volcanologist – Thomas A. Jaggar, who founded the Hawaiian Volcano Observatory (HVO).

The US Geological Survey (USGS) site writes, “Following a Mauna Loa summit eruption in 1933, Jaggar predicted that a flank eruption would occur on the volcano within two years and might threaten (the town of) Hilo. His prediction came true—Mauna Loa erupted in late November 1935.”

Over the course of a month, a pool of molten lava had welled up at the bottom of nearby Mauna Kea. It wasn’t going to stay put, and when it started flowing in Hilo’s direction – and the local water supply of Wailuku River – drastic action had to be taken. 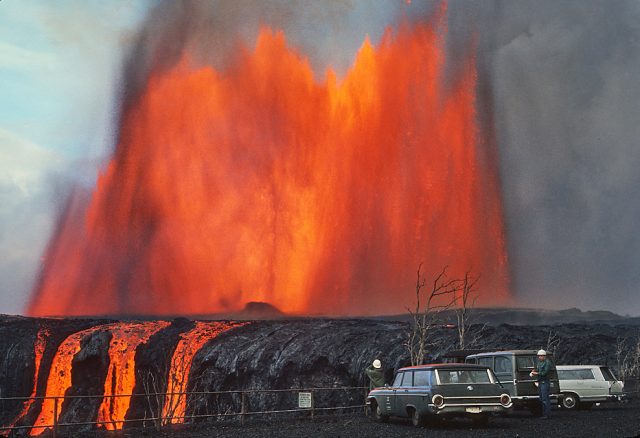 The theory went that by creating explosions by the lava vent, streams of liquid rock might be diverted along fresh channels. Jaggar thought of bombs, but dropping them from the air was the suggestion of Guido Giacometti, a pal of Jaggar’s who worked as a sugar chemist. Actually, the idea of using explosives was nothing new. It had been been previously discussed in 1881 and 1929. Trouble was, no-one had put it into practice yet.

Jaggar contacted the Air Corps, who took to the sky. As for their deliveries (40 in total) USGS writes, “20 of them were 275 kg (600 lb) MK I demolition bombs, each loaded with 161 kg (355 lb) of TNT and armed with a 0.1 second time-delay fuse. The other 20 were ‘pointer bombs’ (for aiming purposes) that contained only small black powder charges.” The 2 unexploded bombs are believed to be pointers.
Their existence was known about beforehand. Jaggar identified and took pictures of the bombs when exploring the site himself in 1939. Then in 1977 geologist Jack Lockwood made his own record. Now Singson has found them in the 21st century, authorities are moving to dispose of the lava-tackling payload.

Did Jaggar’s mission succeed? The town was speedily saved, with the lava stopped after a few days. But in 2020 the jury’s still out. As far as Jaggar was concerned, the bombs had the desired effect. In 1939 he stated the blasts had cooled the lava and created a dam to jam the vent. Later analysis has concluded the volcano was probably on its last gasps anyhow. Mother Nature appears to have resolved the issue herself.

Aside from the issue of whether bombs and volcanoes are a good mix, there’s the question of whether they should get acquainted at all. Interrupting Hawaii’s natural balance with man-made weapons of mass destruction is viewed as unwise by some – not only in terms of unforeseen consequences, but also in spiritual terms.

“Through complicated and sustained efforts, like cooling lava with water or building barriers to stop the flow, a volcano’s eruption can sometimes be redirected,” writes Smithsonian Magazine. “But these efforts are costly, and run the risk of diverting lava from one town to another. What’s more, according to Robin George Andrews of the New York Times, ‘Many Native Hawaiians consider the destruction of volcanic land an affront to their spiritual beliefs.’”

Taking on a volcano is a big ask. But that won’t stop people trying to find ways of averting catastrophe. Dropping bombs by an active volcano is possibly the ultimate case of fighting fire with fire…!