Archaeologists have recently uncovered the remains of a 40-foot wide, circular hut made entirely of mammoth bones. That includes tusks, skulls, and bones of over 60 woolly mammoths in Russia. The structure appears to be about 25,000 years old. Now they’re wondering what the structure could have been used for.

A study about the find was recently published in the journal Antiquity. Dr. Alexander Pryor is an archaeologist at the University of Exeter and the lead author for the study, and he expressed his amazement at the find. He remarked that the sheer number of tusks and bones that had to be found and all brought to the site was staggering. He also said that given how much time and work would have had to go into its construction, it clearly served an important function for the people who built it.

According to Smithsonian magazine, the structure was too large to have had a roof, which means it couldn’t have been a residence, and there are other clues, as well. The team which was working the site found over 400 pieces of charcoal, which is a sign that people built fires in the ring. The charcoal came from pines, larches, and spruce trees, demonstrating that those trees still grew in the area during the time the structure was in use. 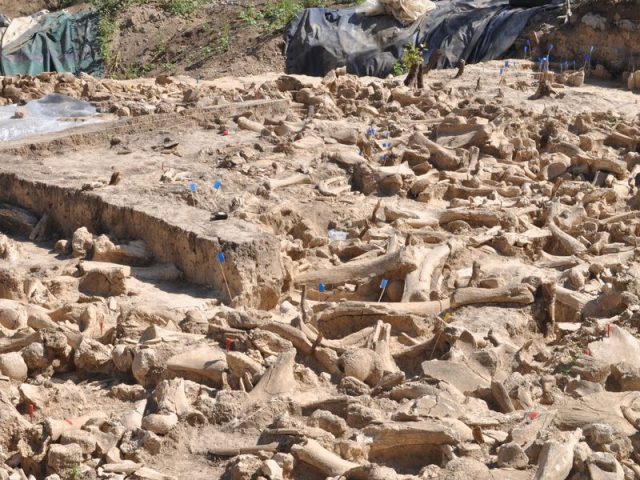 The charcoal was carbon-dated and was determined to be about 25,000 years old, helping the team nail down when it was in use. They also found burnt mammoth bones, which suggests that people may have used wood to start their fires, but used the bones to keep them going. Bone fires may not have been as warm as wood fires, but they generate more light. 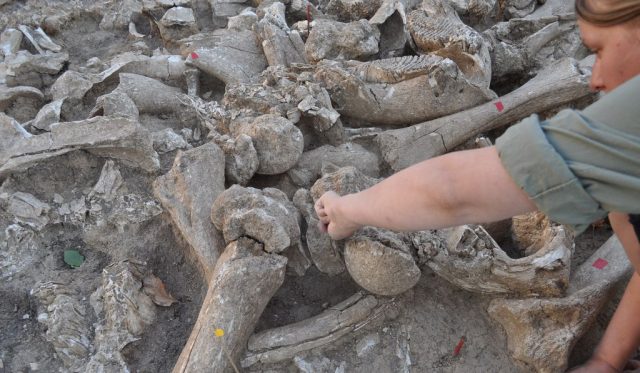 The team also found the remains of food scraps in the circle, including vegetables such as parsnips, potatoes, and carrots. Outside the circle, they found several pits which contained mammoth bones. Pryor suggested that given how much meat could be obtained from a single mammoth, it’s likely that the area may have been used to process and store meat reserves, and the greater amount of light that could be gained from bone fires would have allowed them to work later into night to process and store their food. The vegetables would have been a supplement to their meat-heavy diet. 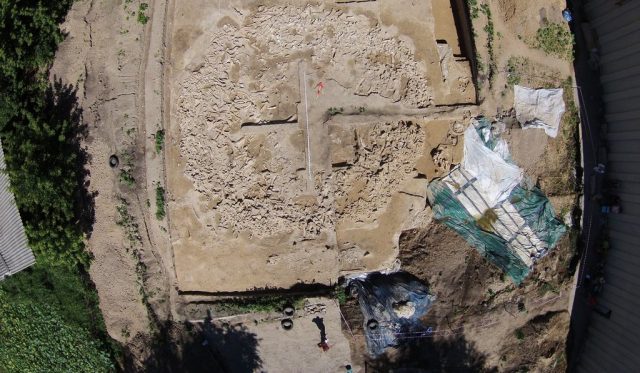 The structure seen from above (A. E. Dudin)

Other people have speculated that since the structure was so large and complex, it may have had some ritual purpose. Pryor believes the two theories are not mutually exclusive, noting that food and ritual are both central to the lives of ancient peoples.

This isn’t the first time archaeologists have discovered building made from mammoth bones. Smaller bone structures have been found across Eastern Europe, most of them only a few meters across. Those smaller structures are generally considered to be dwellings that helped people survive the harsh, bitter weather that was endemic to the region during the last Ice Age.

The smaller structures, called mammoth houses, generally had defined cooking hearths, and contained evidence of the remains of animals like foxes, horses, and reindeer, sowing the people who lived in them ate whatever meat came their way.

The bones at the Russian site, however, were almost all mammoth bones, which would have been unlikely if people were using it as a residence, especially one where people stayed for an extended period of time. It’s also the first time researchers have found evidence that people who lived in the area back then burned wood inside. If no one was living there, though, why light fires?

To the study’s authors, one potential reason seems pretty straightforward. If the site was being used to process and store food, not only would the firelight allow people to keep working after darkness fell, but it would also give them the means to dry some food, make glue, and otherwise make good use of as much of the mammoths as they could.

The most interesting question is still how all the bones were obtained and brought to the site. The researchers have been wondering if they all come from animals they hunted or whether they were scavenged from other sites, or if it was some of both. If the bones came primarily from animals that they hunted themselves, what made the site such a prime spot for so many mammoths to come to again and again, even in the face of being actively hunted?

More study of the site and the bones within it will be necessary to gain further insight. Some of the mammoth bones were arranged the same way they would be if the animals were intact, which suggests that they were brought to the circle before the animals’ bodies could be eaten by other creatures.

However the mammoths reached the site, it’s clear that their presence was extremely important to the natives of the time since the ring structure is surrounded by signs of a settlement, including bone houses, storage pits, hearths, and working areas.