Even as far back as 20,000 years ago in an Indonesian cave, humans liked art and making and having beautiful things that could fit in their pocket. The proof of that was found recently in a cave in Indonesia, where archaeologists found two small, stone ‘plaquettes’ while they were doing an excavation. One of the engraved stones carried a representation of the head and upper body of a local variety of dwarf buffalo called an anoa, and the other bears a design that could represent a flower, an eye, or the sun, according to the team that made the discovery.

The two stones are the earliest examples of portable engravings with figurative images that have ever been found in Southeast Asia, according to an article from Smithsonian magazine. The scientists’ findings were published in the journal Nature Human Behavior last week.

There are several things which are remarkable about the find. The first of those things is that the images on the small stones are representational, not just abstract designs. The capability for and production of figurative art is believed to be one of the things that is unique to Homo sapiens, showing cognitive traits that separate our species from other types of early human. 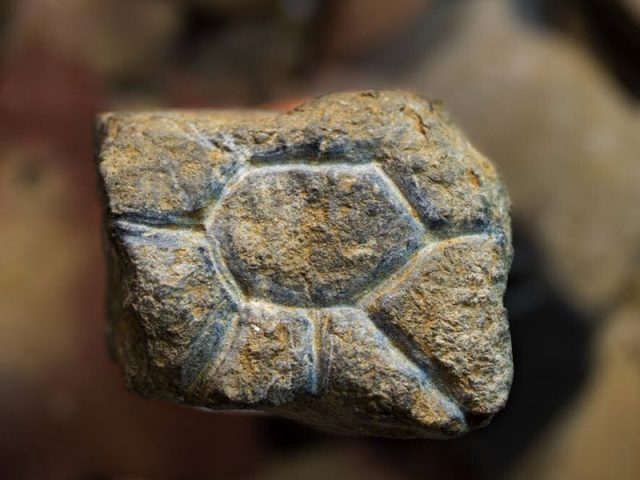 An approximately 20,000-yr-old pocket-sized engraved rock that may depict a sun, eye or flower (Andrew Thomson)

Another of the remarkable features is the fact that they were found in Indonesia. For the most part, ancient rock paintings in Europe have led archaeologists to believe that the creation of are developed there, before spreading to other parts of the world, but that is increasingly seeming untrue.

Michelle Langley, one of the archaeologists who analyzed the stones, remarked that with more research being done outside of Europe, they are finding more examples that suggest that early Homo sapiens were creating figurative art at the same time, around the world. It’s just that no one was looking for it. These two stones, in particular, are between 14,000 and 26,000 years old.

There have been many examples of figurative art in Europe and the Levant which go back 20,000 years, including painted or carved bones, shells, horns, and stones, and Indonesia has many galleries of carved stone, but no one had ever found portable artworks from the same period of time. 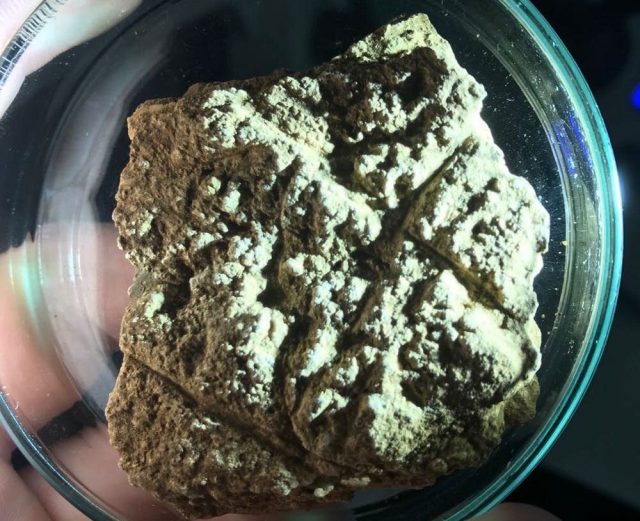 An approximately 20,000-yr-old depiction of an anoa (dwarf buffalo) on a fragment of flowstone rock. (M.C. Langley)

These examples were found on the island of Sulawesi, in Leang Bulu Bettue cave, amid all sorts of other artifacts and detritus. There were stone tools, bits of what appeared to be personal decorations, and the remains of animals which had been butchered and burnt. It’s been speculated that the pieces may have served as decoration for a popular place for the inhabitants to gather.

Dr. Langley was part of the team excavating the cave. The team was made up of Australian and Indonesian archaeologists and was led by Adam Brumm of Griffith University. Langley said that the carving in the stone wasn’t apparent until she was looking at it back in the lab, using a flashlight, according to ABC news.

She said she was examining the piece and trying to figure out which of the lines on the rough stone of the (anoa) carving were natural and which weren’t, when the shape of the creature’s head just sort popped out to her, then the lines of the body came soon after. Under the light, it was clear that the carving was of the animal, with its head turned toward its shoulder. The carving was done as a bas relief, where the stone around the animals head was lowered, making it stand out with a three-dimensional effect.

The second plaquette’s markings were much easier to see. For one thing, it was carved on a smooth stone, without the complications of the stone’s natural texture obscuring the work. For another, the carving was a very straightforward and simple shape, resembling a child’s crayon drawing of the sun, a roughly circular shape with rays arranged around it. Under a microscope, it could also be seen that that lines had originally been filled with red pigment to make them stand out, although it was no longer visible to the naked eye.

Both of the carvings were done on different rock than that which made up the cave. That notion was reinforced by the fact that neither pattern ran off the edges of the stones they were etched on, which they would have if either piece had fallen off a larger work carved in one of the cave’s walls.

Some experts speculate that the reason artifacts like these stone plaquettes have never been found before is because older methods of conducting excavations may have overlooked such small items, and even known they were there.