Could a primordial worm-like creature be the oldest relative of the human species? Biologists, zoologists and other evolutionary experts continue to investigate our ancestral links to other, earlier creatures that existed in the natural world. This led to a rather startling and exciting discovery in Australia recently. A fossil found in Nilpena, located in the south of Australia, has revealed a wee, 555 million year old, worm-like creature that has distinct traits in common with homo sapiens, and shares a spot near, or at, the top of our oldest family tree.

The team doing the research, led by professor Dr. Mary Droser and recent PhD graduate Dr. Scott Evans, geologists from the University of California Riverside, who say the newly discovered fossil has confirmed what evolutionary biologists have theorized for decades now. Droser explained in an interview with the Daily Mail, “It’s the oldest fossil (we have) with this type of complexity,” she began. “This is what evolutionary biologists predicted. It’s really exciting that what we have found lines up so neatly with their predictions.”

Those predictions, she continued, were that man’s origins lie on the ocean floor, where this fossil of Ikaria Bilaterian, as the little, rice grain sized animal is called, was found. Although it is indeed tiny, the worm-like animal has a front and back, and two openings at two separate ends that are connected by a gut; those criteria are what bestow this little guy a place on all life’s family tree. As Droser said, it is the “blueprint” from which every life form that came after it sprang.

The creature’s way of moving included digging down into the ocean floor, seeking pockets of organic matter — food. It also used its muscles in a contracting and releasing way that enabled it to move, much like a modern day worm moves. “We thought,” said Droser, “these might have been the early bilaterians that we were looking for.” 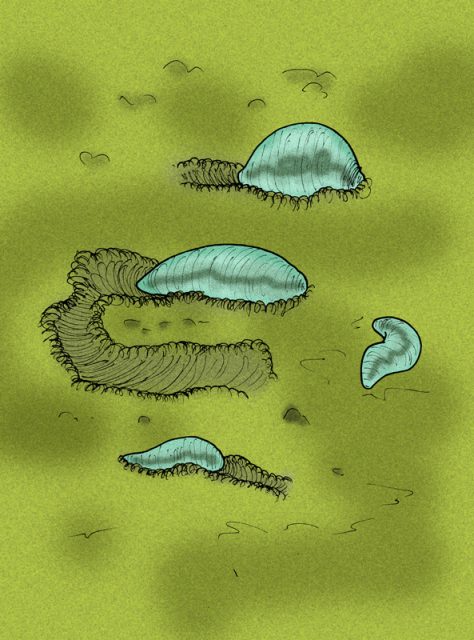 The fossil even indicates, to their well trained eyes, that the Ikaria Bilaterian had basic sensory abilities, something scientists believed but, until this discovery, were not able to prove conclusively. The latest computer technology they employed, however, enabled the team to take the theory and make the findings concrete.

Evans was equally thrilled by the discovery of the fossil, and explained to the Daily Mail that, “once we had the 3D scans, we knew that we had made an important discovery.”

The name given to the creature, Ikaria, is a tribute to the founding peoples of Australia. The word Ikaria means “meeting place” in the language of Australia’s first Indigenous people. The word ‘bilaterian’ is defined as animals that have bilateral symmetry, symmetrical sides (as humans do) a head, anus and gut. The Ikaria Bilaterian may be tiny, but it fits the bill on all counts.

Droser and Evans are thrilled by the new findings, and plan to continue researching our earliest relative for fresh insights. Some are calling Ikaria Warjootia, in a nod to Warjootia Creek, in southern Australia, another tribute to the people and location where this vital discovery was made.

Related Article: The Oldest Material Ever Found on Earth has been Discovered

No matter what scientists call it, this worm-like creature proves that man’s ancestors go back much further than many previously speculated, back far beyond even our earliest relatives in the monkey community. No doubt scientists like Droser and Evans will continue searching for clues to discover just how far back mankind can be traced, and just where the earliest life forms on the planet are located.

« Who was the Man in the Iron Mask? Classic Historical Mystery Explained
Fearing End of the World, Man Returns Museum Artifact 15 yrs After Stealing It »