Recently-revealed papers are throwing new light on the controversial papacy of Pope Pius XII. Was he a friend to the Nazis? A cautious opponent? Or is the situation too complex to judge? With Vatican archives opened in March, it’s hoped the truth will be found. Already historians searching through newly opened documents from the vast archives say they’ve found evidence, detailed in German weekly paper Die Ziet, that suggests Pius was made aware of the horrendous plight of Jews under Nazism as early as 1942.

Papal records are usually made public 70 years after a Pontiff’s end. In this case however, Pope Francis brought forward the unsealing by almost a decade. At an early 2019 event marking the 80th anniversary of his predecessor’s election, the current Bishop of Rome claimed the Church is “not afraid of history”. He said “tormented decisions” within the institution had led to behavior that “to some could appear as reticence.”

Why is Pius controversial? As Pope during the second world war (the Papacy lasting from 1939 – 58), he chose to sit down with the 20th century’s greatest manifestation of evil – Hitler’s Third Reich. Many view his neutral response to Nazism as catastrophic. Smithsonian Magazine writes, “the pontiff’s refusal to publicly condemn the Nazis represents a shameful moral failing with devastating consequences.” 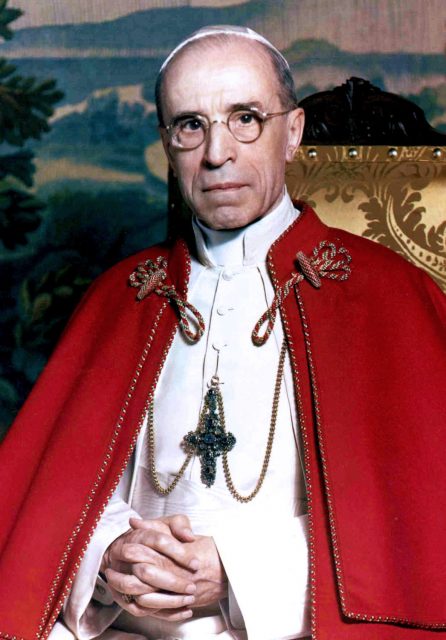 The 1963 play The Deputy by Rolf Hochhuth depicted the Pope’s moral absence during the conflict. And journalist John Cornwell went so far as to call him “Hitler’s Pope”. It was the title of his 1999 biography of Pius, which argued he legitimized and strengthen the Führer’s hand by not criticizing the regime.

Commentators such as Prof. Mary Vincent of Sheffield University emphasize the Pope’s incendiary balancing act. Describing Pius to The Guardian as “careful, austere and quite unlikable”, she also says “categorizing him as good or bad is not helpful – it’s about the decisions he took, and the space he had to make those decisions.”

For many his approach saved Catholics from Nazi persecution. Supporters also highlight the fact that Italian convents provided sanctuary to thousands of Jews. The Vatican’s newly-presented documents have given experts further insight into the decision-making process in Rome. Visitors included noted Church historian Fr. Wolf Hubert. One communication he uncovered makes for uncomfortable reading. 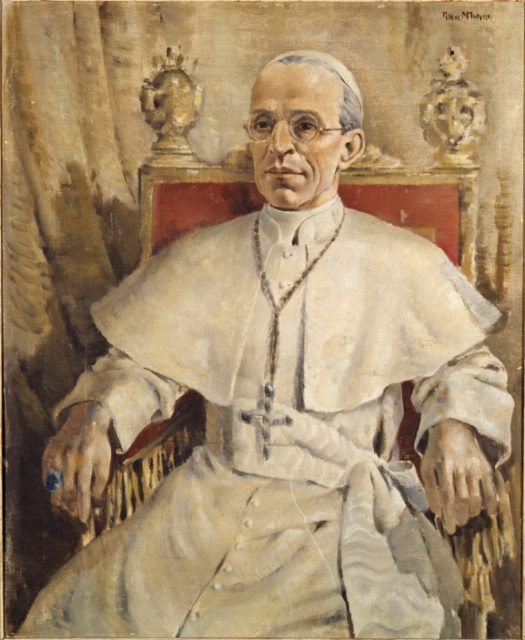 The Catholic Register writes Fr. Hubert “revealed to a German newspaper (Die Ziet) that his team of seven researchers discovered a memo… Written by a staffer at the Vatican’s Secretariat of State, it warned Pius against believing reports of German atrocities he’d received from Jewish sources and from the Ukrainian Catholic Patriarch Cardinal Andrey Sheptytsky. The Vatican official, then Fr. and later Cardinal Angelo Dell’Acqua, said that Jews ‘easily exaggerate’ and that ‘Orientals’ (Ukrainian Catholics) ‘are really not an example of honesty.’”

Bearing in mind the Pope’s refusal to speak out against attacks on Jews directly at the time, the latest information is explosive. It appears he knew that atrocities were happening on a grand scale, though never voiced full-throated opposition. Though as TIME points out, while “he never publicly condemned the Nazis for what happened to Europe’s Jew, Pius XII would often speak in general terms about protecting minorities and hating war.”

He wasn’t entirely silent and did say something, albeit later in correspondence. The Guardian reports how “In 1943, he wrote to the bishop of Berlin, arguing that the church could not publicly condemn the Holocaust for fear of causing ‘greater evils’.” 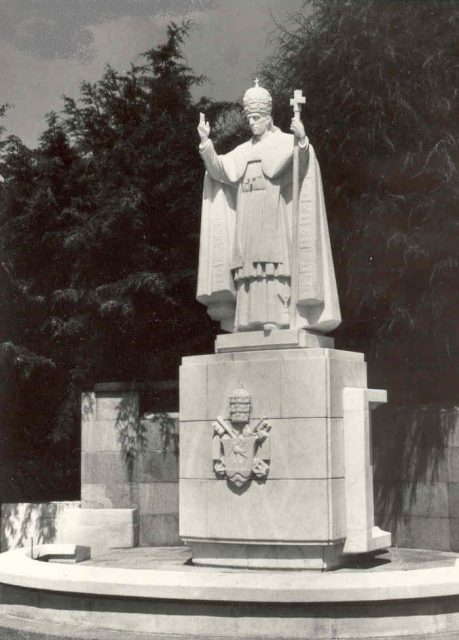 Statue of Pope Pius XII in Fatima, Portugal. Photo by Ambrosius007 CC by 3.0

Pius XII first dealt with Nazis whilst a Vatican diplomat. As Cardinal Secretary of State Eugenio Pacelli – his birth name – he oversaw the Reichskonkordat treaty of 1933. This brought together Papal jurisdiction of the “Holy See” and the requirements of an emerging Reich. It reportedly quelled certain political interests in the Church whilst granting it protection from Hitler’s forces.

“From the beginning, the world had many questions about the nature of the working relationship between the Vatican and the Fascist regime” TIME wrote last year. Quoting an edition from 1943, it adds “In general the most serious charges against the Church concern the skill with which the Vatican and its hierarchs have fished and swum in the Fascist sea surrounding them”. Pius became Pope six months before war broke out. He remained silent when Hitler marched into Poland in 1939.

Could he have made a noise about the rise of evil, even if he’d wanted to? That is one question preoccupying believers and non-believers alike. TIME refers to historian David Kertzer. “Pius was reluctant to condemn the Nazis despite that tension, not ‘because he was pro-Nazi, by any means’ (Kertzer) but because, in part, he was anxious not to ‘endanger the position of Catholics in the Axis countries, that they would be discriminated against by the Nazi governments.’ (Catholics were a minority among German Christians.)”

Yet the context is nowhere near being cut and dried. Speaking to the Observer Kertzer also says, “Hopefully, what we’ll find from these archives is why he did what he did, and what discussions were going on behind the walls of the Vatican.” 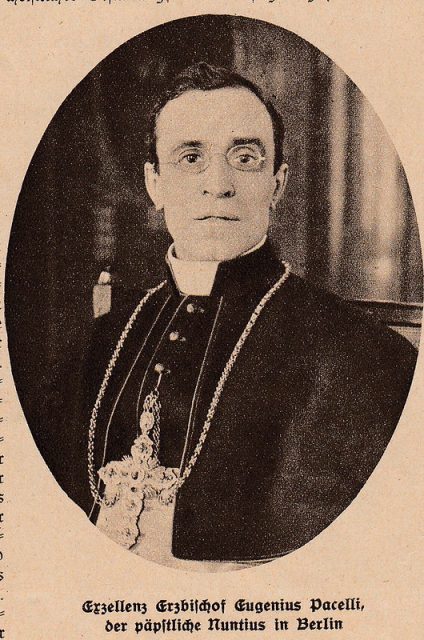 The figure of the Pope has been much-publicized recently, thanks to 2 high profile fictional dramas – HBO’s The Young Pope starring Jude Law and The Two Popes, starring Anthony Hopkins as Pope Benedict and Jonathan Pryce as his successor Francis, released by Netflix. Over in real life, Benedict suggested Pius XII as a candidiate for sainthood. Francis seems less convinced.

It wasn’t just Germany who were keen to have Pius on side three quarters of a century ago. World governments saw the Pope as an important ally. America for example viewed him as key to winning the hearts of minds of Catholics. So while Pius said nothing against the Nazis, he wasn’t exactly called out either.

There was also the matter of an ideology that, from the Vatican’s perspective, may have been a worse prospect than Hitler’s. TIME mentions Hochhuth’s The Deputy, which “accused the Pope of not openly condemning Hitler’s anti-Semitism because he saw Nazi Germany as a barrier between Christians and communists.”

Related Article: The Youngest Pope in History Might’ve Also Been the Worst

With many different factors swirling around, investigating the legacy of Pius XII is a massive undertaking. This isn’t the first time the Vatican has opened its archives on the matter. Between 1965 – 81, no less than 11 volumes of material were published in an attempt to set the record straight. The releases were deemed selective and unsatisfactory by some.

Who knows what may be found once the archive is accessible again? As the Catholic Register notes, “The Pius XII section of the Apostolic Archives (formerly known as the Secret Archives) contains at least 200,000 boxes with over two million documents.” It’s thought the paperwork will take years to sift through.

In the meantime, the tarnished reputation of Pius XII hangs in the balance. Religious belief and conflict have a historic and terrible association. The Second World War unquestionably brought out the best in people of faith, who wanted to help defeat the Nazis. However what truly lay behind the neutral behavior of one of history’s most talked-about Pontiffs? A definitive answer is still a long way off…