According to a recent report in the Salt Lake Tribune, a storm over the lake exposed a shipwreck that may be as much as 100 years old over Memorial Day weekend.

The Great Salt Lake in Utah is the largest lake west of the Mississippi River. As one would guess from its name, the lake is salty. In fact, it’s too saline to support fish or many other aquatic species. It also sits over several wide, flat basins, which means its surface area can expand or contract to a surprising degree with even relatively small changes in the water level. Those changes make developing the shoreline something of a challenge, since the shore isn’t stable. It also means that sometimes things come to the surface that you don’t usually see.

The shipwreck came to the attention of the media after the state’s Park Service posted a picture of the wreck on their Facebook page. The steel boat is near the south shore of the lake, and was exposed when winds associated with the storm caused waves which eroded the lake bed, washing away sand that had previously covered the wreck. The wreckage is that of a steel boat that may be from the early years of the twentieth century. 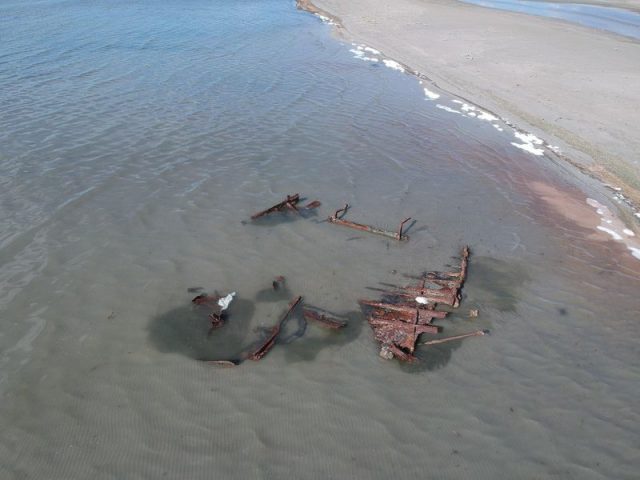 According to a story in Smithsonian magazine, the lake’s water level has been decreasing in recent years, as streams that feed into have been diverted for use as drinking water, which further enable the exposure of the wreck.

Dave Shearer, the manager at Great Salt Lake State Park, described the ship as having a steel hold and wood planking. It might have been one of the vessels that were part of a fleet used by the Southern Pacific Railroad to construct a causeway across the lake in the early 1900s. The wreckage suggests the boat was 30 or 40 feet long, which is about the same size as the boats the railroad used back then. 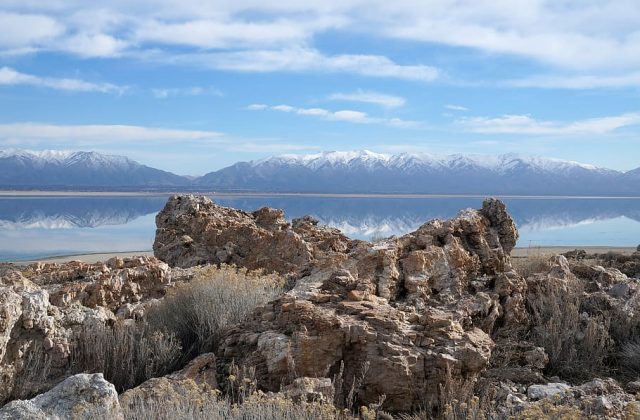 The Great Salt Lake, site of the shipwreck, Utah

The fleet of boats the railroad maintained was the only way for it to transport supplies to a particular portion of the Transcontinental Railroad which was built simultaneously from Sacramento California at one end and Omaha, Nebraska at the other. Work on the railroad took seven years before the two ends finally came together at Promontory, Utah, in May 1869. The causeway was built around 35 years later, bypassing Promontory and taking about 40 miles off the route.

The boats were used to haul logs to the causeway or the railroad, then to bring supplies things from the railroad back to the mining camps. Shearer told a local television station that the Great Salt Lake was “littered with shipwrecks from the last 150 years,” and that he personally knows the locations of at least 20 of them.

This isn’t the first time that changing water levels in the lake have exposed a wreck. In 2014, low waters levels uncovered a ship that Brigham Young may have used to carry cattle to Antelope Island in 1854, according to a news report at the time. Shearer said that another drop in water level exposed the remains of another boat from the Pacific Railroad’s fleet, the W.E. Marsh No. 4, which sank in the mid-1930s.

For all intents and purposes, the Great Salt Lake is less of a lake and more of an inland sea, with all the treacherous weather and occasionally challenges circumstances that idea implies. The first known near-wreck happened as early as 1843, when a group of surveyors in a rubber raft nearly came to grief when a storm blew up out of nowhere.

A pioneer named Christopher Layton was shipwrecked in 1872, when a steamship he owned ran aground on what is now Antelope Island, and may be the earliest documented shipwreck on the Lake. Today the lake is about 75 miles long and about 35 miles wide, and was even larger in the late 1800s and early 1900s, which means it is more than large enough for a number of ships to come to grief.