Drive-in restaurants have made a comeback in these uncertain times. Staying in is the new going out. That’s been the situation in 2020 for a while. But there is one way of doing both… taking to the road, yet remaining in your car.

With eateries dependent on public access to survive, the recent health crisis has naturally hit them hard. Those with parking space however have revived a set up many assumed long dead: the drive-in restaurant and its teams of trusty carhops! Harking back to a bygone era, they’re sending the food out to vehicles while customers wait behind the wheel.

Smithsonian Magazine mentions Mark Obois. He runs Fitz’s on the Lake in Wisconsin and is doing drive-in restaurants for the first time ever. How did it come about? “He says he came up with the idea while mulling over a government-issued mandate stating that food or beverages could not be consumed on your restaurant property except in a vehicle” the magazine writes. 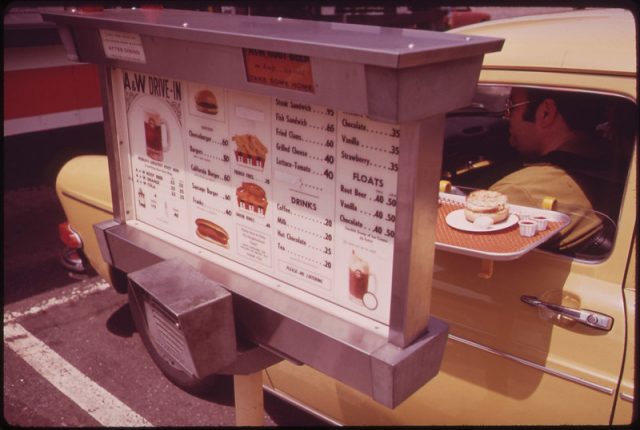 Obois himself is quoted saying, “So I thought, we already do curbside delivery and also have these parking spaces looking right over Lake Wisconsin. Why not try carhop service, too?” His picturesque location forms the perfect backdrop for old school food service.

Fitz’s on the Lake and others are putting a classic concept back in the public eye. The magazine also talks to architect and author Alan Hess. He believes drive-in restaurants are “a significant example of modern architecture.” Some of them sure knew how to make the world go round – circular drive ins saw carhops zooming round on roller skates, getting meals onto trays and to the car window in record time. “It had a purpose,” Hess comments “and still has a purpose.” 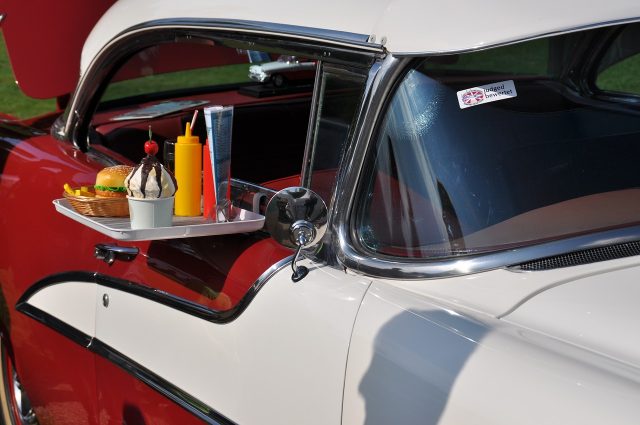 America’s burgeoning love affair with the automobile made drive-in restaurants and other destinations a necessity. The very first was Kirby’s Pig Stand in Dallas, Texas (opened 1921). The idea caught on and became a solid fixture in US culture. Johnnie’s Drive-In in Mississippi “was also a popular stop of Elvis Presley, who spent his first 13 years in Tupelo and often swung by on Sunday afternoons for milkshakes with his parents Vernon and Gladys.”

No greater tribute was paid than by young filmmaker George Lucas. Before Star Wars came along, his movie American Graffiti (1973) revisited that slice of the past. Parts of it were shot at Mel’s Drive-In. The image of colorfully-attired waitresses on skates bearing burgers was key to evoking the film’s early Sixties spirit. No wonder it was emblazoned across some of the posters. Mel’s is a long-established chain, one that’s found itself bringing back the carhop for petrol-powered patrons. Not that this is an entirely nostalgic experience. Modern technology plays its part to make the dining experience even safer. 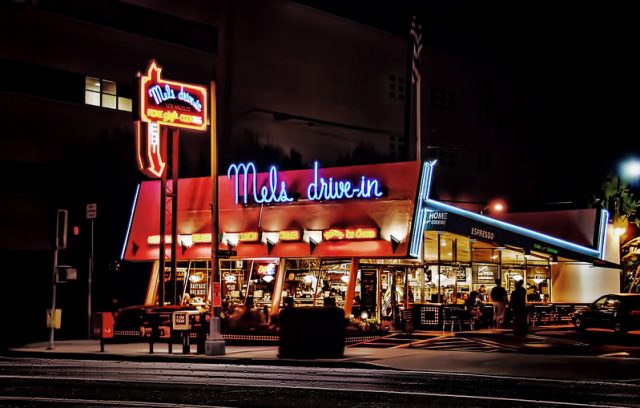 Smithsonian Magazine goes back to Wisconsin. “Since these spaces are 60 to 70 feet from the restaurant’s entrance, Obois also purchased POSitouch software,” it writes, “allowing servers to utilize a cash register touch screen from an iPad they carry with them. This way, they can send orders and process payment without customers ever having to leave their cars.”

Eventually all good things come to an end. The drive in fell foul of the drive-thru. Chains such as McDonald’s cut out the middle man on wheels and replaced him with a teenager behind a screen.

Will this carhop revival last beyond the pandemic? Jeffry Castree, who runs the Broadway Diner (also in Wisconsin) sees customer interest remaining, even as the go ahead is given to welcome folks inside. “Castree intends to continue supplementing his business with carhop offerings—particularly as they get into the tourism season. ‘Families really seem to like it,’ he says. ‘Especially those with young kids, many who’ve never been to a drive-in before.’”

The interest in drive in eats goes hand in hand with drive in movies. Theaters have been popping up outside so people can pull in and check out films on the big screen. It only makes sense for restaurant owners to set up movie nights in their parking lots. Food and Wine calls the move a “logical intersection of nostalgia, social distancing, and good eating”.

Reporting last month, the site goes on to say, “In Omaha, The Corner Kick brought out about 35 cars to their parking lot earlier this month—some people in their cars, others perched in their trunk with the tailgate open, all watching The Three Amigos on three different screens on the side of the building, with the audio broadcast into cars via FM radio.”

Related Article: Drive-In Theaters are Coming Back in Style for a Socially Distanced World

The reception seemed positive in more ways than one. “After a successful first run, they’ve since made movie night a weekly event; this week will be their fourth.” No-one is sure how long the drive in resurrection will last. In the meantime, it’s providing comfort to those for whom venturing out is still a tad too unpalatable.