Irene Triplett, the last US citizen claiming a Civil War pension, has passed away aged 90. She’d been living in a North Carolina nursing home for over 60 years and received $73.13 a month from the Department of Veterans Affairs. That figure was reported in 2014, and hopefully increased since then!

The significance of Ms Triplett’s passing cannot be overstated. “There are now very few Americans left alive with direct connection to the Civil War” the Daily Mail writes. “The last Civil War veteran, Albert Woolson, died in 1956 at 109. Gertrude Janeway, who was the last widow of a Civil War veteran, died in 2003 at age 93.” Irene’s father Moses served in the war, however he wound up fighting for both North and South. When attending a Gettysburg reunion many years later in 1938, he was shown to the Confederate tent. To people’s surprise, he later explained he’d become a Union man.

How had that happened? Moses was just 16 when he signed up with the North Carolina Infantry, 53rd Regiment in 1862. He subsequently joined the 26th. A 2014 piece from the Wilkes Record states that it “saw action in the Seven Days’ Battles and later the conflicts at Rawls’ Mills and Goldsboro. The 26th went on to fight with the Army of Northern Virginia from Gettysburg to Cold Harbor, took its place in the entrenchments south of the James River, and was involved in the final campaign at Appomattox.”

The last American to collect a Civil War pension has died https://t.co/czwQt0faOL

Moses didn’t see the Battle of Gettysburg. Taken ill, he spent time in a Virginia hospital. It signaled a drastic change of heart. “He ran away from the hospital, records show,” reports the Wall Street Journal, “while his unit suffered devastating losses at Gettysburg. Of the 800 men in the 26th North Carolina, 734 were killed, wounded or captured in the battle Pvt. Triplett missed.” This represents a harrowing 92%.

Branded a deserter, he joined the Union’s 3rd North Carolina Mounted Infantry in 1864 aged 21. The group were known as “Kirk’s Raiders”, after Col. George Washington Kirk. That name would follow Moses when the shooting stopped. “After the war, former Kirk’s Raiders were despised in areas of the former Confederacy.” 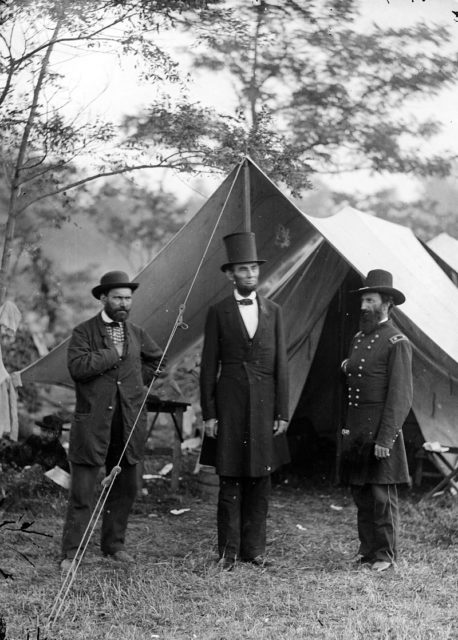 Pinkerton, McClellan and Lincoln in 1863. Source:Library of Congress.

Not that it seemed to trouble him too much. Living near Elk Creek, Moses had an interest in rattlesnakes, keeping them as pets. “He often sat on his front porch with a pistol on his lap. ‘A lot of people were afraid of him,’ his grandson, Charlie Triplett, told The Wall Street Journal.”

In 1924 he married second wife Elida Hall. There was an age gap between them of half a century. Irene had a tough upbringing, born with what are described as mental disabilities. Her mother also suffered from these. “Along with her brother, Everett… Irene lived hard on the steep slopes of Cougar Mountain near Ferguson” writes the Wilkes Record. “There they raised cows, horses and other livestock. ‘I remember milking cows before I went to school,’ she said.” She didn’t get on with her parents or teachers, and her father never talked about the war. Irene left home at 13. 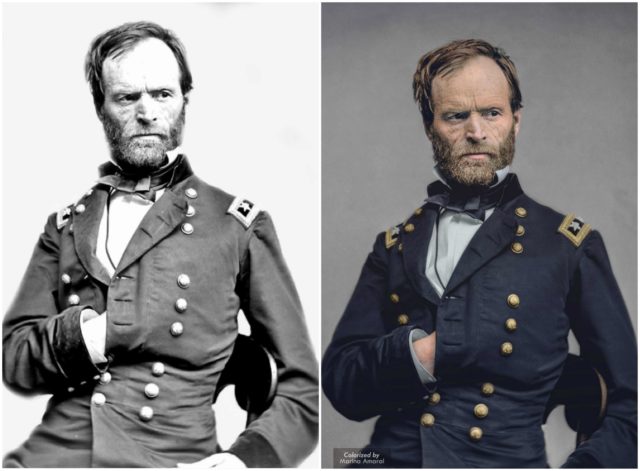 Moses died aged 92, shortly after attending the reunion where he was mistaken for a Confederate. Irene and Elida lived at Wilkes County poorhouse and began receiving the Civil War pension. Though she did work some regular jobs, Irene was cared for most of her life. “She died Sunday from complications following surgery for injuries from a fall, according to the Wilkesboro, N.C., nursing home where she lived” writes the Journal.

She wasn’t alone during those years. It’s reported “a pair of Civil War buffs visited and sent her money to spend on Dr Pepper and chewing tobacco, a habit she picked up in the first grade.” Her background made her a fascinating source of historical information. “You’re talking to somebody whose father was in the Civil War, which is mind-bending” said Dennis St. Andrew, a former North Carolina Sons of Union Veterans commander. The group will apparently go into mourning for 30 days, as per tradition.

As for Irene herself, what did she make of receiving the pension her family had been benefiting from for an extraordinary century and a half? “I’ve been getting it for a long time” she told the Record. “I feel pretty good about it.”