Say Goodbye to Aunt Jemima – Breakfast Icon to be Rebranded

Aunt Jemima could soon be disappearing off the shelves… at least her name and image will. The pancakes and syrup brand is going to be changed in light of recent cultural shifts. Critics believe the product is guilty of racial stereotyping and that its time has finally come.

Quaker Oats (a PepsiCo subsidiary) agree and have released a statement detailing their future plans. These include going back to the drawing board design-wise, as well as making donations of “at least $5m (£3.9m) over the next five years to support the African American community” according to BBC News.

NBC quotes Quaker Foods North American VP/Chief Marketing Officer Kristin Kroepfl: “As we work to make progress toward racial equality through several initiatives, we also must take a hard look at our portfolio of brands and ensure they reflect our values and meet our consumers’ expectations.” 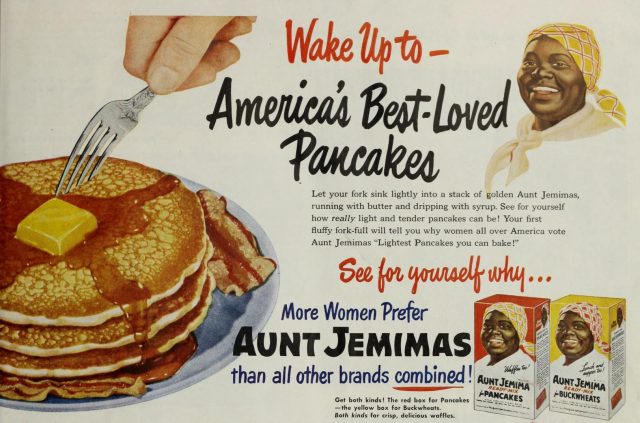 Established in 1889 by Chris L. Rutt and Charles G. Underwood, the popular product was born out of necessity. The men had so much flour to spare in an overcrowded marketplace they wound up creating ready-to-go pancake mix. After a short and unsusccessful period of development, they sold the operation on to the Davis Milling Company. Quaker took charge in 1926.

For their branding, Rutt and Underwood looked to vaudeville and the song “Old Aunt Jemima” (by Billy Kersands, 1875). The character, with connections to minstrels and “blackface”, was first embodied by Nancy Green. Aunt Jemima’s company website describes her as “a storyteller, cook and missionary worker.” She was also born into slavery. Numerous performers were hired over the years, including Anna Robinson at the second Chicago World’s Fair. 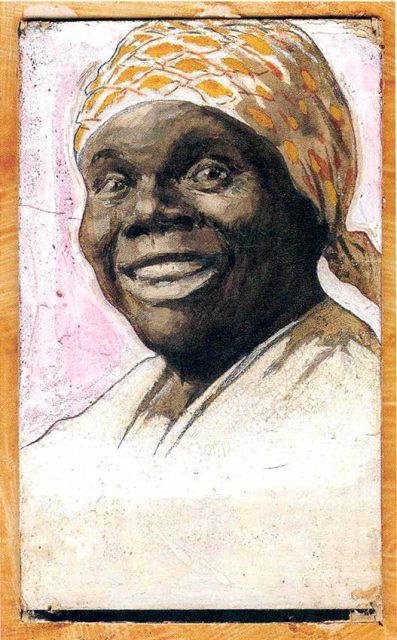 In an opinion piece for the New York Times in 2015, Cornell Associate Professor Riché Richardson outlined her objections, calling for the image to be ditched. “This Aunt Jemima logo was an outgrowth of Old South plantation nostalgia and romance grounded in an idea about the ‘mammy,’” she wrote, “a devoted and submissive servant who eagerly nurtured the children of her white master and mistress while neglecting her own. Visually, the plantation myth portrayed her as an asexual, plump black woman wearing a headscarf.” 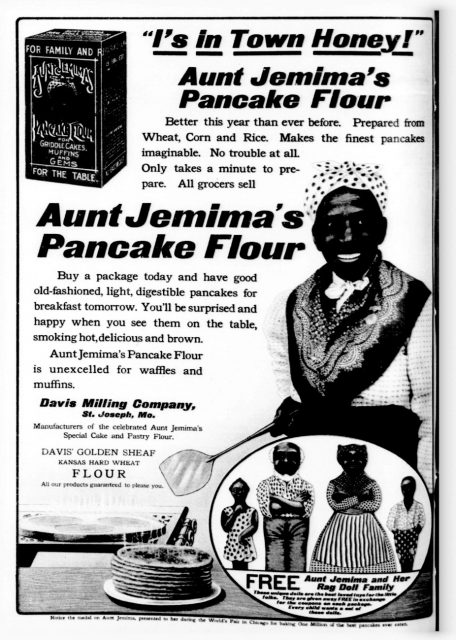 Ad for Aunt Jemima pancake flour, from the November 7, 1909 edition of the New-York tribune.

Referring to the concept of Aunt Jemima as “based on a racial stereotype”, Kroepfl mentions “While work has been done over the years to update the brand in a manner intended to be appropriate and respectful, we realize those changes are not enough”.

Following suit are Mars Inc, who own the Uncle Ben brand. Their title character first appeared in 1946, represented by Frank Brown, a chef and waiter from Chicago. The name has been linked to the historic use of “Uncle” as a less respectful substitute for “Mr” by Southerners. Its origins lie in the real Uncle Ben, a rice farmer from Texas. These brands join a growing list of controversial staples getting a 21st century makeover. Earlier in the year Land O Lakes retired Native American “Butter Maiden” Mia. The decision received both praise and complaint from customers.

In 2014, a lawsuit was brought against Aunt Jemima by the descendants of product demonstrator Anna Short Harrington. The claim was that Harrington – together with Nancy Green – produced recipes for the mix, and that the family were owed $2 billion. Their case was dismissed the following year.

Aunt Jemima’s successor is under wraps. “Quaker said the new packaging will begin to appear in the fall of 2020,” notes NBC, “and a new name for the foods will be announced at a later date.” Quite what that will be is a mystery, though whatever form the food line takes it’s a dramatic day for consumers and marketing departments everywhere.

« Archaeologists Believe they have Located the Tomb of Cleopatra
Dame Vera Lynn: Curtain Falls on Ultimate Forces’ Sweetheart at 103 »