Fisherman Stumbles Upon Medieval ‘Mary and Child’ Statue on Riverbed

A fisherman has found a historic religious statue depicting Mary and child thought to be around 700 years old. Of all the many historic, cultural and religious sights in Spain that draw millions of visitors each year, one of the most compelling has to be the pilgrimage of Santiago de Compostela in the north.

Every year, hundreds of people take to the hiking trail that winds its way from Pamplona to the cathedral in Santiago, a cherished place many centuries old that marks the end of the pilgrims’ journey. Some people take to the trail for a kind of spiritual reawakening; others do it to take in the gorgeous scenery and quaint villages along the way, while still others do it for the physical challenge and break from busy, modern life.

Whatever the reason, the path has been a favorite of people from around the globe for decades, some doing only part of the trail, while others take about 35 days to complete it. And that’s if they walk up to 27 kilometres per day, an undertaking that is not for the faint of heart or the out of shape. Nonetheless, those who do the hike often say it is a trip unlike any other: part vacation, part test of one’s endurance, and part experiment that demands courage, fitness and adaptability. 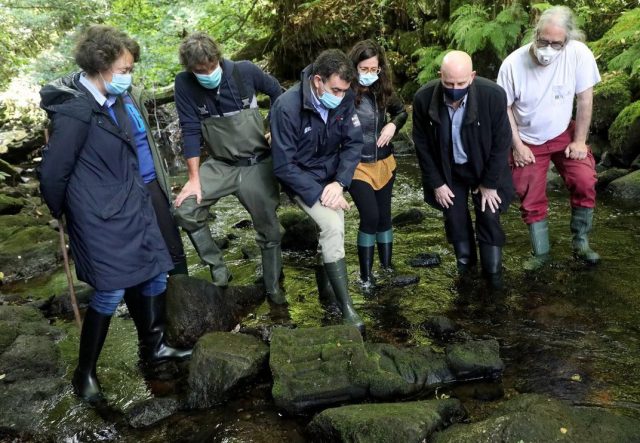 The team of researchers around the statue. (Conchi Paz via Apatrigal)

The people who live in and near Santiago have witnessed every manner of walker and hiker come through their village, but they simply get on with their lives and conduct their routines as if visitors weren’t inundating their region three or four months of every year. That’s what the fisherman who found the Mary statue, Fernando Brey, was doing one day in early June — just getting on with his work down by the river. The fisherman was caught up short, however, by something he noticed gleaming by the river’s edge, something he knew immediately was no ordinary large stone. 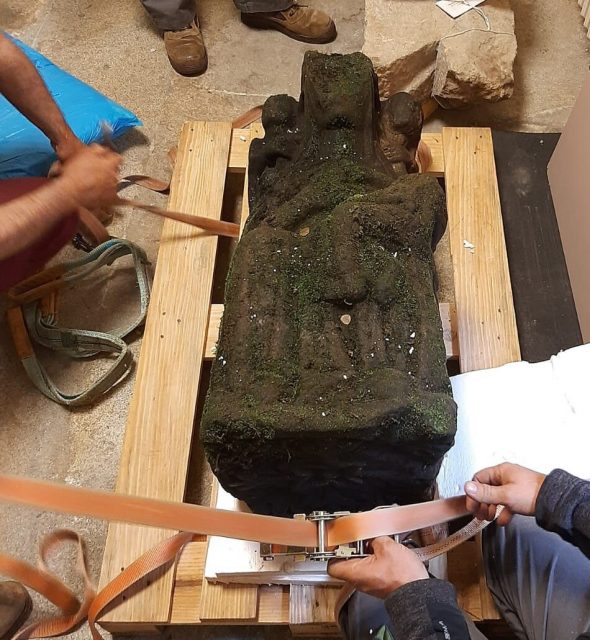 The statue was removed and taken to the Museum of Pilgrimage and Santiago. (Photo courtesy of the museum)

It was square, for one thing, and the closer he looked, the more he knew that he was looking at an extraordinary artifact. He had stumbled upon a 700 year old statue of the Virgin Mary, who holds in her lap the baby Jesus. On each of her shoulders sits an angel, holding up her cloak or cape and looking down at the holy child, as if watching over him and his mother. Brey immediately contacted local expert Ana Paula Castor, a member of the nearby heritage association. She worked in tandem with the authorities from the Ministry of Culture in Galacia.

Experts from the Museum of Pilgrimage and Santiago soon arrived to examine the treasure, and take it back to their facility to clean it and conduct a thorough examination. Their initial assessment is that the Mother and Child sculpture, made of granite, is approximately dates back to the 14th century. Unfortunately, both Mary and Jesus are missing their faces, and experts can only surmise that it was a deliberate act of desecration by someone, perhaps several centuries ago.

As intriguing as the statue is in and of itself, it is equally intriguing to experts how a 330 pound sculpture could lie at the edge of a riverbank for decades, or even centuries, without being detected before now. Regional culture minister Roman Rodriguez went down to the water to see the surprising find for himself, and commented to the media, “Beyond its cultural and historic value, we’ll need to try to put together the story of this statue… it must be quite a story.”

Quite a story indeed. It’s not as though someone could simply steal away with the artifact in the dead of night and dump it on the riverbed — or could they? This is where the investigative skills of historians, archaeologists and art experts come into play, and they will no doubt stay on the case of the mysterious religious statue until they are satisfied they’ve answered these and other pressing questions about its origins, its sculptor, and its fate in the shallow waters of the river’s edge, where the statue of Mary and child was ultimately found by a fisherman.