In Clearwater Heights, Florida, there have been long-standing rumors of a lost African-American cemetery being left behind when St. Matthew Missionary Baptist Church moved back in the 1950s. Those rumors were proven to be true, when archaeologists used ground-penetrating radar on the site of what used to be the church’s cemetery, and is now mostly covered by a parking lot and is the site of FrankCrum, according to a report in the Tampa Bay Times.

The archaeologists only surveyed about one-fifth of the 2.5 acres that comprised the old cemetery, but the results showed 70 objects of the correct size and shape to be graves. Given the small proportion of the area that was examined, it seems likely that may be other graves as yet undiscovered.

The church was built in 1909, and the land it sat on was sold in 1955, according to Smithsonian Magazine. At the time of the sale, efforts were made to move the people who were buried there to another African-American cemetery in a town called Dunedin. All the graves with markers were moved, but not all them were marked, and apparently the unmarked graves were overlooked.

In the 50 years since then, the land has been put to several uses, including a department store, a tech firm, and an administrative building. FrankCrum, the current owner of the property, bought it in 2004 and had no idea the graves existed. This is the fourth time this year alone that an African-American cemetery has been discovered in the Tampa area. 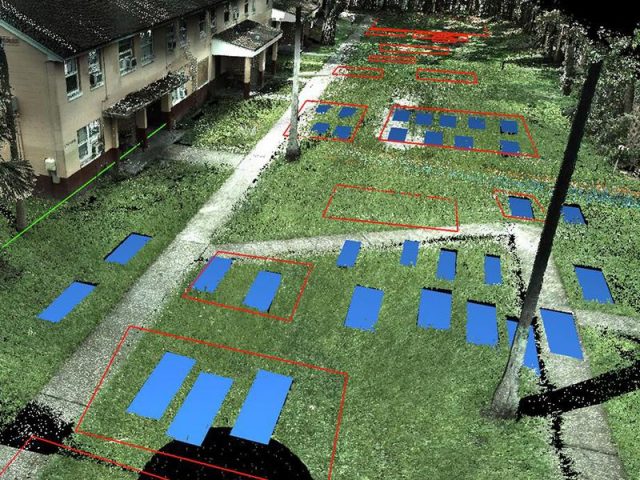 This 3-D scan reveals the locations of a lost African-American cemetery that once belonged to Zion Cemetery, an African American cemetery founded in Tampa in 1901 and rediscovered last year. (Courtesy of the University of South Florida)

It all started in June, 2019, when the Times reported the first and most sizable of them, the Zion cemetery on North Florida Avenue in Tampa. A cemetery researcher named Ray Reed told a reporter at the Times that he’d come across a death certificate listing a cemetery he’d never heard of – Zion. The reporter and one of his colleagues did months of research and finally discovered that the area’s first all-black cemetery came into use in 1901, with around 800 people being buried there before it went out of use nearly 30 years later.

Archaeologist used ground-penetrating radar at the site on North Florida Avenue where the cemetery sat, and found evidence of around 200 graves. The next cemetery that was discovered was Ridgewood Cemetery, also located in Tampa. Reed reached out to the same two reporters who did the legwork in the search for Zion, and while they were working, Reed went to the local school district with evidence that there might be another cemetery under King High School in Tampa.

The school district publicized the information. It turned out to be a pauper’s cemetery holding about 267 graves, and radar showed that 145 of them were still there. Most of the people who were interred there were Africa-American. Since the discovery, the school has put a fence around the area until the next steps have been determined.

The third of the four cemeteries is College Hill Cemetery, in Tampa. After the sensation caused by the discovery of the Zion Cemetery, a woman approached one of the reporters, Paul Guzzo, to see if he would help her find her uncle’s missing grave. Guzzo had heard the occasional mention of a cemetery near the edge of Ybor City, which might be near the Italian Club Cemetery. After doing more research, Guzzo found College Hill Cemetery, a graveyard for African-Americans and Cuban, which was built early in the 20th century and held over 100 graves.

That discovery brings us back to Clearwater Heights. As with College Hill, people in Clearwater Heights had heard quiet references to a currently-unknown cemetery for African-Americans in their town, so they approached Guzzo to see if he could find the truth. For the most part, the local couldn’t remember its name or probable location, but did remember that family members were probably laid to rest there.

According to Emerald Morrow, who reported on the Clearwater find for local station WTSP, the fact that these graveyards and lost African-American cemetery were ‘forgotten’ is no accident. She pointed out that during the Jim Crow segregation years, people of African descent were effectively prevented from owning property, meaning that it was easy to force the original occupants out of their communities, leaving no one behind to remember where their dead were buried.

« The Classic Caped Crusader: Michael Keaton in Talks to Return as Batman
Fisherman Stumbles Upon Medieval ‘Mary and Child’ Statue on Riverbed »