A Viking settlement has been discovered in Iceland, thought to be the country’s oldest. Sounds straightforward? Not at all! The structure was found under another one. And it may change the timeline over how historians view the arrival of Norsemen on the island, considering the age of the structures are believed to date before the commonly accepted time frame of when Vikings discovered and settled Iceland.

Archaeologist Bjarni F. Einarsson and his team have been excavating a farm site at Stöð, near the eastern village of Stöðvarfjörður. He first observed the area in 2007 and had to wait till 2015 before the digging started. By finding 2 Viking buildings, or “longhouses”, it’s the historical equivalent of “two for the price of one”.

Longhouses “were divided into rooms and could be shared by several families” writes Live Science. “Fires were built in stone hearths along the center, and farm animals could be stabled there to protect them from cold.” The top-lying house dates back to approx 874 AD and belonged to what the Iceland Review website calls a “wealthy farmer”. 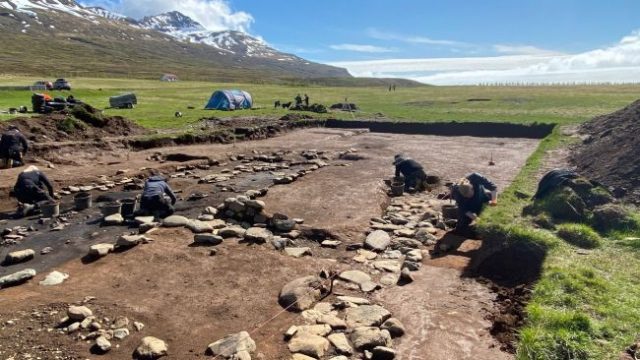 The newest of the two Viking settlement longhouses found contain the most valuable and oldest cache of artifacts ever found in Iceland and was probably a Viking chieftain’s hall. (Image credit: Bjarni Einarsson)

At 130 ft in length, it exceeds the 92 ft required for the home of a chieftain. Einarsson says the farm structure is “the richest in Iceland so far”, owing to the staggering variety of material inside. Coins from Rome and the Middle East were reportedly unearthed, together with 29 silver objects and 92 beads. There is also what’s known as hacksilver, “cut and bent pieces of silver used as bullion or currency by the Vikings and other ancient peoples.” (Live Science) 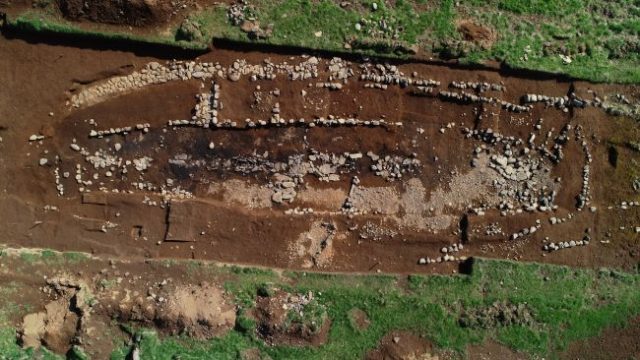 The oldest of the two Viking settlement longhouses found dates from around A.D. 800, several decades before the commonly accepted date of Iceland’s founding and settlement  in A.D. 874. (Image credit: Bjarni Einarsson)

The date of this longhouse, thought to be the oldest viking settlement, matches with assumptions over when Vikings landed in Iceland. However, the presence of a second house beneath is making experts revise their thinking pretty quickly. Einarsson comments to Iceland Review that it was “built inside the fallen walls of the older structure that appears to have been huge, at least 40m (131ft) long.”

He estimates the place goes back to around 800 AD, predating the previously held date of Viking settlement on the island by almost 75 years. Furthermore, it appears to be seasonal accommodation rather than anything permanent. While the top house is kind of aristocratic, the bottom seems to be one for the workers. Evidence of a smithy on site shows the hard graft involved. It’s the only example of a Viking blacksmith’s forge found on Iceland. 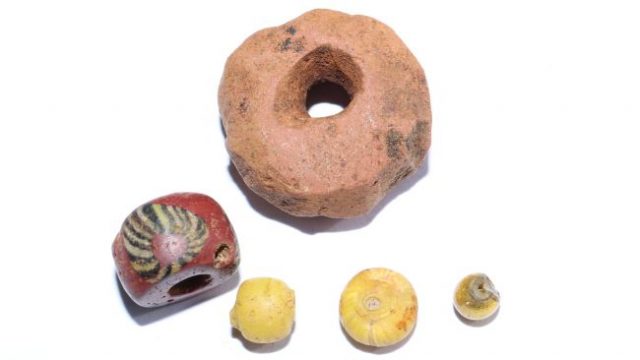 The excavations uncovered many decorative glass beads and a large sandstone bead that were probably used for trading. (Image credit: Bjarni Einarsson)

How come the Vikings set up this camp? Iceland’s history – chronicled in the classic medieval text ‘Landnámabók’ (‘The Book of Settlements’) by the country’s first historian Ari Þorgilsson – presents a poetic version of how things got started on the island.

Fleeing Norway and its tyrannical King Fairhair, hardy adventurers sighted the island on the horizon. “Records tell the story of Viking chief, Ingolfur Arnarson” writes the Daily Mail, “who sailed from Norway along with friends and farm hands in search of land untouched by humans.” Ingólfur was Iceland’s first permanent settler, with the location first being discovered by the Viking Naddodd. 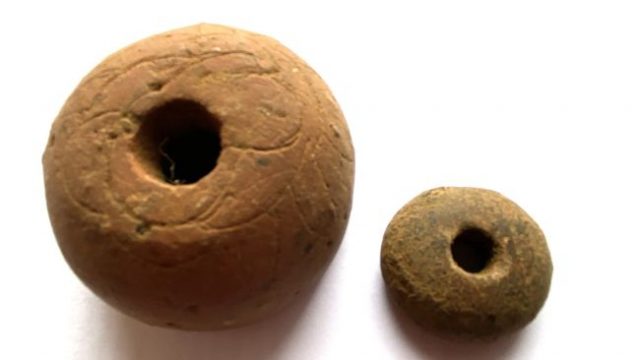 Archaeologists also found everyday life artifacts at the site, including several spindle whorls made of sandstone that were used for spinning fibers into thread or twine. (Image credit: Bjarni Einarsson)

Iceland review picks up the story: “Ingólfur threw his high-seat pillars overboard, swearing an oath to build his farm wherever they came ashore. The gods directed the pillars to Reykjavík, where Ingólfur made his home in the year 874.”

On this evidence, the great chief rocked up a little late. “Landnámabók erects this wall at the year 874” Einarsson tells the Review. “Scholars have been hesitant and afraid to peek beyond it.” The Review mentions “a kind of gold-rush moment” that many associate with the country’s founding. In reality, there would have been a lot of planning needed. What better way to get the lie of the land than to have workers try it out first?

Einarsson theorizes the seasonal camp was focused on hunting, “operated by a Norwegian chief who outfitted voyages to Iceland to gather valuables and bring them back across the sea to Norway.” What did they hunt? The lack of animal bones indicates something was indeed tracked down, and rather effectively. Last year, traces of a now-extinct subspecies of the Atlantic walrus were identified. Could the Norse visitors have wiped them out for their useful and, more importantly, tradable properties? These included skins, blubber and meat.

“The total population appears to have been small, maybe as few as 5,000 animals” says Icelandic Museum of Natural History Director Dr. Hilmar Malmquist, quoted by Iceland Review. “They would have been completely unaccustomed to humans and easy to kill”. The Review observes that “Walrus hunting would have played a vital role during the early exploration and initial settlement of Iceland, potentially generating enormous riches for ambitious settlers.”

Other materials such as whale teeth were also valuable. What’s more they rattled around on the shoreline in abundance, where people could just collect them to bring home.

Einarsson and co are sifting through the “newer” longhouse before they can properly get to grips with the old. Not only does this latest find represent a potential milestone in Viking exploration, it alters perspectives on Icelandic history in an unexpected way. The settlement shows how life back then really was lived by the skin of the teeth…!