A Russian couple have built an incredible replica of the Great Pyramids of Giza…in their backyard! A Russian couple have taken their love of Egyptology to new heights. Andrey and Viktoria Vakhrusheva decided on an unusual addition to their summer house. The view of their garden, in the village of Istinka near St Petersburg, contains grass, trees… oh, and a 30ft (9m) high pyramid.

Each side measures 13 m. What drove them to recreate this ancient spectacle? Maybe they were possessed by the ghosts of the mighty Pharaohs. Either way, the scaled down version – it’s a nineteenth of the size – is made of concrete. The original was created with basalt, or volcanic rock. However the architects can be forgiven for not sticking entirely to tradition.

Aside from the materials, they’ve put their heart and soul into the summer house pyramid, bringing Giza to the garden. Quoted by Euronews, Andrey explains “this is still a monolithic structure, we made careful calculations in terms of masonry, making it in a special way so that it is as close (to the original) as possible.” 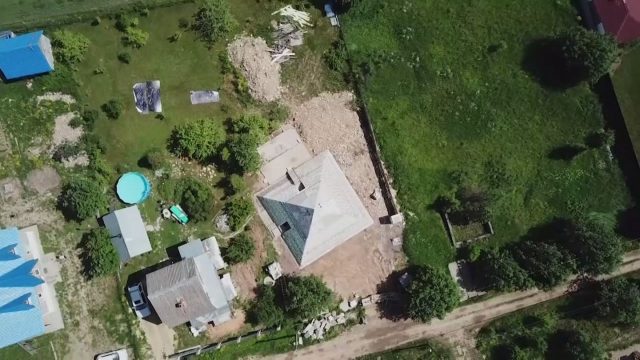 Overhead view of the property with the pyramid on it. (ITNA Russian)

At 400 tons, the ritualized replica certainly grabs the attention. The couple made numerous trips to Egypt in order to study the Giza pyramid. Building work commenced approx a year ago. It looks stunning from the outside. And while the interior is reportedly still being developed, what there is to see makes a treat for history buffs and casual visitors alike.

For fifty bucks, interested parties can spend time in the underground chambers, and marvel at the statues. The insides are sunk 9 m into the earth, emulating the real deal. Those brave or curious enough to venture below include meditators, who clearly see this ancient environment as the perfect place to unblock their chakras. They’d better be careful not to bump into the sarcophagus. Unlike other dimensions of this extraordinary place, the casket is full size. 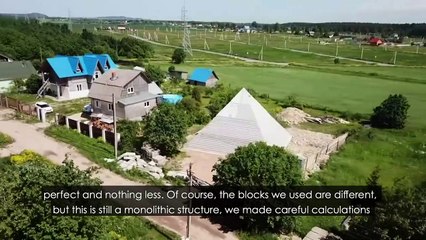 “We had to reduce the rest of the pyramid’s contours” Viktoria says, “but the sarcophagus is made the size as it is in Cheops Pyramid, we just made sure it fits in.” Cheops is another name for Khufu, the Pharaoh in whose honor the pyramid was built.

While these 21st century enthusiasts took a year to realize their Egyptian vision, the actual Great Pyramid is thought to have taken over 2 decades to complete. Finished in around 2490 BC, it stands at 147 m high and held the title of tallest man made structure for nearly four thousand years.

According to History Extra it “required 2.5 million stone blocks to be cut, moved and positioned.” The site writes it “sits alongside the pyramids of Menkaure and Khafre, and is perfectly aligned with the constellation of Orion.” In Ancient Egyptian culture, rulers would become stars after their death. There’s no word on whether Andrey expects the same fate.

The exact nature of the pyramids and what they were used for is a long-standing puzzle. Their method of construction eludes experts to this day. Like its larger counterpart, the family landmark features corridors that must feel like something out of a scary movie. In spite of being a home made version, it still has that sense of majesty and mystery..

Do the neighbors mind being towered over by a modern day tribute to the planet’s oldest wonder? Euronews refers to Aleksandr Pustoshinskiy, who describes Andrey and Viktoria as “normal neighbors”. He adds, “what they are doing inspires (me to think of) something different”.

Related Article: Missing Fourth Great Pyramid of Giza may Finally Have Been Found

If he wants to come up with his own structure he’d better be quick. The pyramids-crazy Russian couple have their next project in mind already. “The family also plans to build a temple that will be connected to the pyramid by a passage” say Euronews. Well, it beats a garden shed make no mistake.

« The Great London Beer Flood of 1814 – When a Giant Wave of Suds Crushed the City
Gone With the Wind Star Olivia de Havilland Turns 104! Her Amazing Life in Photos »