Remarkable Roman-era structures have been found underneath an iconic Egyptian road. In ancient Egypt, Kebbash Road connected the Karnak Temple Complex with the Luxor Temple. Kebbash Road was the sphinx-lined walkway that Pharaohs used to hold parades and ceremonies, and it has now been reconstructed to look the same as it did in Ancient Egypt. The site was opened to the public in March of 2013, closed, and then reopened in 2018.

The walkway is just over a mile and a half and is lined with one thousand two hundred ram’s head sandstone sphinxes that would have originally been brightly painted. Not nearly as large as the famous Sphinx but certainly as important, Enjoy Egypt Tours explains that sphinxes were used as a way of protecting Luxor and the temples from looters as well as to honor Amun, the ancient Egyptian god of the sun and air. 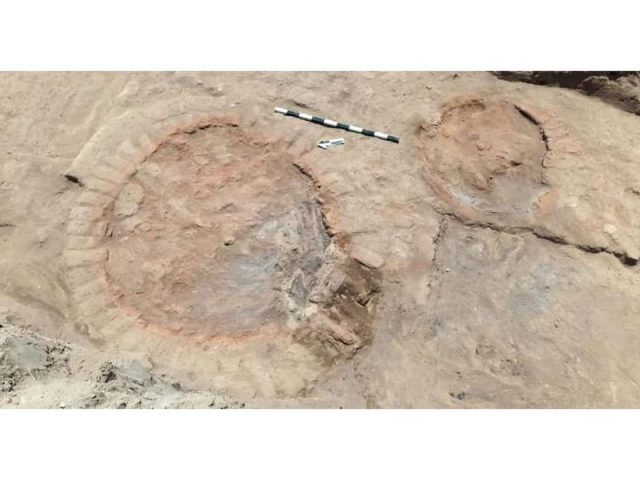 The circular Roman ovens found at the site were probably used to bake bricks or pottery. (Courtesy of the Egyptian Ministry of Tourism and Antiquities)

Excavations are still ongoing, and the most recent surprising discovery is a one hundred foot long sandstone wall along with the footprints of several round ovens probably used for firing bricks and pottery according to Mostafa Waziri, Secretary-General of the Supreme Council of Antiquities. The wall dates to the Roman occupation of Egypt

Described in Smithsonian Magazine, the wall, believed to be a flood wall for the eastern banks of the Nile River, is west of Kebbash Road and is eight feet tall and ten feet wide with the bricks set in three horizontal rows. The site dates from the third through the fifth century, the latter being part of the rule of the Roman Empire.

Luxor is the area of the Valley of Kings, Valley of Queens, the Temple of Deir el-Bahri, Karnak Temple, and Luxor Temple as well as ancient graves, monasteries, and other minor temples. When the walkway is completely finished it will be the largest open-air museum in the world, and the Egyptian tourist industry is set for the influx of new visitors to the recently updated Corniche area of Luxor. 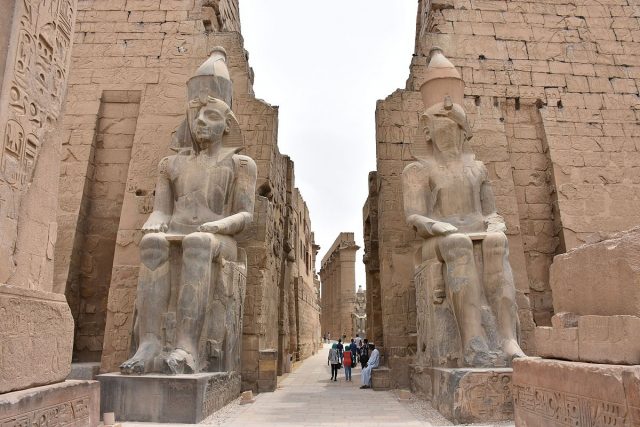 Entrance to Luxor temple, Egypt. Roman structures were found underneath the Egyptian Kebbash road near here. Photo by MusikAnimal

At the northern point of Kebbash Road, the sphinxes lead to the first pylon of the enormous Karnak Temple. The Kiosk of Taharqa is next with a statue of Ramesses II and his daughter, Bent’anta following up. The second pylon is next, and the following Great Hypostyle Hall had one hundred and thirty-four columns that at one time held up the ceilings and were decorated to resemble papyrus with writings and hieroglyphics. 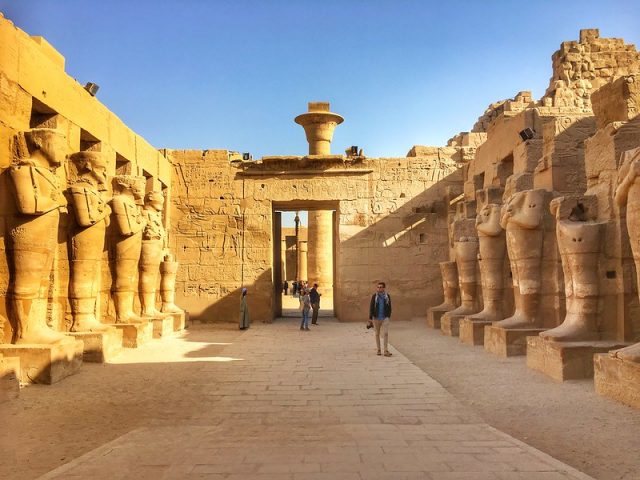 Beyond the Hypostyle Hall moving south are the Temple of Mut, the Temple of Thutmose III, the Red Chapel of Hatshepsut, the White Chapel of Senusret, the Temple of Khonsu, and the Sacred Lake. All along the way are obelisks, statues, and carvings of Egyptian royalty. At the southern end of Kebbash Road is Luxor Temple. Somewhat smaller than Karnak Temple it was not dedicated to any god or pharaoh but was probably where pharaohs were crowned, according to Earth Trekkers. Most of the construction was done about 1400 BC by Amenhotep III and completed by his son, Tutankhamun, and then Horemheb.

Rameses II added his likeness to two huge statues that stand sentry over the entrance to the temple. Originally two eighty-foot pink granite obelisks stood in front of the statues, but one was relocated to Paris. The court of Ramesses is the next area and, after walking through a colonnade of papyri decorated columns, is followed by the court of Amenhotep III. The next area is mostly antechambers. The majority of the walls are covered with hieroglyphics.

The Luxor Museum houses artifacts from the area and a few treasures from the tomb of Tutankhamun. A small Mummification Museum can also be found with mummies of cats, crocodiles, birds, and people on display while visitors learn about the mummification process.

Luxor was originally part of Thebes, the capital of ancient Egypt during the 14th century BC. Encylopaedia Britannica tells us the city, which was divided by the Nile River, was about thirty-six square miles with the most vital part on the eastern bank. The western bank was the place of residence for craftsmen, soldiers, and laborers who created the royal tombs and mortuaries found nearby.