‘Star Wars’ actor and star of stage and screen Julian Glover is having a clear out of his personal collection of movie memorabilia. Being stuck at home means thinking about all that housework piling up. But Glover, 85, had a more interesting task than most!

After sorting through his accumulation of showbiz memorabilia during lockdown, he’s decided to put 250 items under the hammer later this month. East Bristol Auctions are handling the sale. The sellers believe “he had ‘lots more’ 30 years ago but ‘binned’ items, thinking they had no value” writes BBC News.

What he did keep is bound to get fans of Star Wars, Harry Potter, Indiana Jones and more itching to bid. Glover memorably appeared as General Veers on an AT-AT Walker in ‘The Empire Strikes Back’ (1980). He then took on Harrison Ford’s whip-cracking adventurer in 1989’s ‘Indiana Jones and the Last Crusade’, playing arch villain Walter Donovan. Voice-wise, he brought Aragog the spider to life in ‘Harry Potter and the Chamber of Secrets’ (2002). And that’s just the tip of the cinematic iceberg. 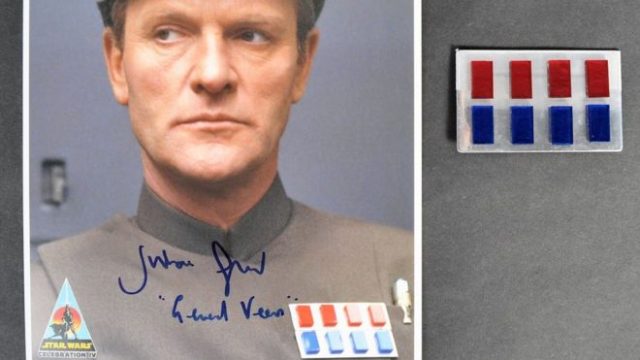 The badge of rank memorabilia, which has an estimate of £4,000 to £6,000, was worn by Julian Glover in Star Wars The Empire Strikes Back. Photo: EAST BRISTOL AUCTIONS

Of particular interest is a “badge of rank” he sported whilst following Darth Vader’s deadly instructions. This little costume piece from a long time ago in a galaxy far, far away is estimated to fetch between £4,000 – 6,000! The BBC mentions auctioneer Andrew Stowe, who says “when I first unwrapped the badge, I got a little tingle in my spine”. Better a tingle in the spine then a psychic death grip round the throat!

Indiana Jones and the Last Crusade villain Walter Donovan’s overcoat (est £2,000 – 3,000) and watch (est £1,500 – 2,500) are also listed, together with Glover’s personal copy of the screenplay complete with hand-written notes. That’s thought to be worth as much as £3,000. Bidding is already underway on the lots, with the main event set to kick off on the 24th. 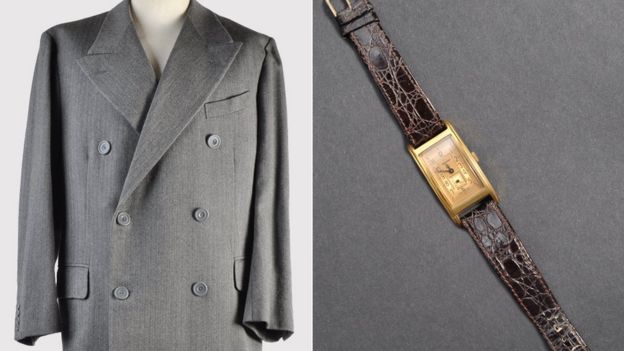 Those after a more modest purchase might be interested in a replica Holy Grail cup (est £250 – 400). Donovan famously sought eternal life, though in picking the wrong vessel to quench his thirst he suffered a terrible fate.

“The 1:1 scale prop replica being made of clay and expertly painted to match the one used in the film” states the listing for East Bristol Auctions. “Aged with gold and white paint, the interior painted in gold. Autographed by Julian Glover to the interior, and also to the certificate. Measures approx; 15cm tall. Supplied with a selection of autographed photographs of Mr Glover from the movie.” 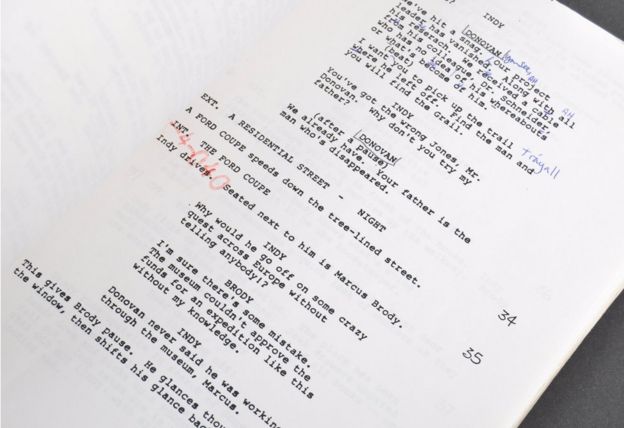 Julian Glover’s personal script from Indiana Jones and the Last Crusade, with all his handwritten directions, notes and line changes, is also included in the auction. Photo: EAST BRISTOL AUCTIONS

Born in Hampstead, 1935, Julian Glover attended grammar school alongside David Prowse. Prowse went on to don the Sith suit as Vader for the original ‘Star Wars’ trilogy. Glover’s stage work includes performances with the Royal Shakespeare Company. Last year he played at the Noel Coward Theatre, as Nonno in ‘The Night of the Iguana’ by Tennessee Williams.

His face is recognizable from a raft of films and TV shows. Glover has clearly enjoyed collecting these mementos –
quoted by BBC News over the upcoming sale, he said “now that I am the age I am, it’s time to let them go and I thought other people might get as much pleasure out of them as I do.”

The actor also faced Roger Moore’s James Bond in For Your Eyes Only (1981). As Bond villain Aristotle Kristatos, he played a corrupted war hero selling war tech to the KGB. Glover was actually in the running for 007 himself as Sean Connery’s replacement. On the small screen he appeared in Game of Thrones as Grand Maester Pycelle (2011 – 16) and nightmarish man monster Scaroth in Doctor Who: City of Death (1979). These roles are celebrated via signed photos, autographed action figures and a treasure trove of other items.

Concerning the auction of his lifetime collection of memorabilia Glover said, “I have, not so much collected as not thrown away, quite a lot of things that I enjoyed and still enjoy. But now that I am the age I am, it’s time to let them go and I thought other people might get as much pleasure out of them as I do.”

Related Article: Isaac Newton’s Foul, Stomach-Churning Cure for the Plague up for Auction

While lots can be viewed “by appointment only”, the auction of the Star Wars star’s memorabilia is taking place via live broadcast.