Nantes Cathedral in France suffered a major fire on July 18 that is being treated as arson. On Saturday morning crews were called to the city’s popular 15th century landmark, also known as “the Cathedral of St Peter and St Paul of Nantes”. Approx 100 firefighters took several hours to extinguish the blaze.

A 17th century organ and stained glass windows have been lost, though overall the structure was saved. A 19th century painting – ‘Saint-Clair Curing the Blind by Jean-Hippolyte Flandrin – is also thought destroyed among others.

According to BBC News, Nantes public prosecutor Pierre Sennès “said the fire is believed to have been arson”. Evidence suggests it broke out in 3 areas, “one near the ‘grand’ organ… a second near a smaller organ left of the altar and a third to the right of the altar” writes The Guardian. They add, “At least one of the fires appears to have originated near an electrical fuse board.”

Breaking: There is a massive fire at the historic Nantes Cathedral in France. pic.twitter.com/QTkPsD0LSr

Coming so soon after the Notre-Dame Cathedral blaze, this latest fire has shocked the country. Political figures have been swift to pay tribute to emergency services. “Support for our firefighters who take all the risks to save this Gothic gem in the city of the Dukes” tweeted President Emmanuel Macron. The BBC mentions Jean Castex, French Prime Minister, who “praised their ‘professionalism, courage and self-control’.”

A volunteer worker was brought in for questioning but later released without charge. The 39 year old man is a Rwandan refugee and reportedly locked up on Friday night. Speaking to Le Figaro, clerk Jean-Charles Novwak defended him, saying Nantes Cathedral “was a place he adored”. Quoted by The Guardian, Sennès stated the move was “normal procedure” and not an indication of guilt. 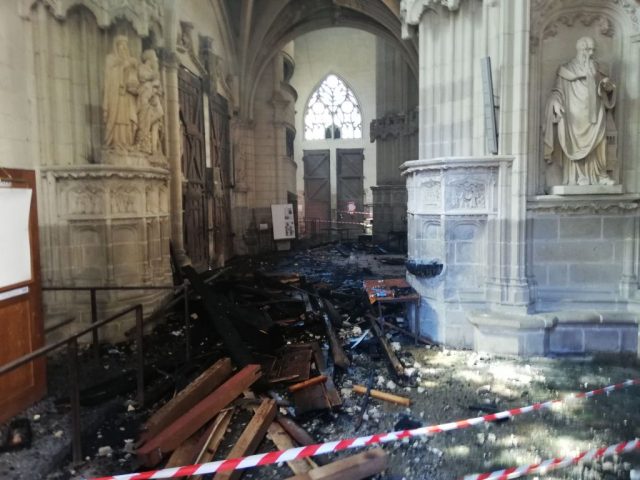 The remains of the burnt organ after falling from the 1st floor during a fire inside the St. Peter and Paul cathedral in Nantes, France. (Photo by FANNY ANDRE/AFP via Getty Images)

The fire is dramatic, yet the cathedral has seen worse. As well as playing a role in the French Revolution – serving as an observation platform during the Battle of Nantes in 1793 – it was bombed during the second world war. Then in 1972 another fire consigned the roof to oblivion.

Bearing in mind time taken to finish construction in the first place, these incidents are few and far between – centuries elapsed before Nantes Cathedral’s completion. “The Gothic facade was completed by the end of the 15th century, with the towers being constructed around 1508” writes the Culture Trip website. “Finally, in 1891, the cathedral was inaugurated.” 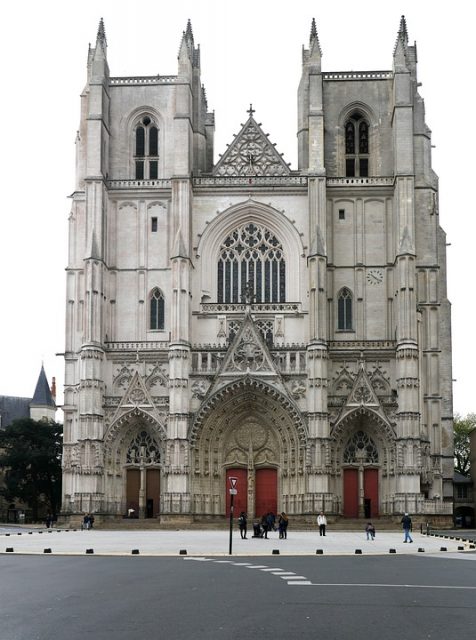 Notable features include François (Francis) II’s tomb. He was Duke of Brittany and is joined in eternal rest by his wife Marguerite de Foix. As referred to by President Macron, Nantes is also called the city of the Dukes. The Dukes of Brittany used to live there during medieval times, with their 15th century castle located at the centre of the old town. The treasured windows of this Roman Catholic structure are much missed. Culture Trip notes, “The cathedral is illuminated, even on the most gloomy of days, by 500m² of colourful stained glass.” 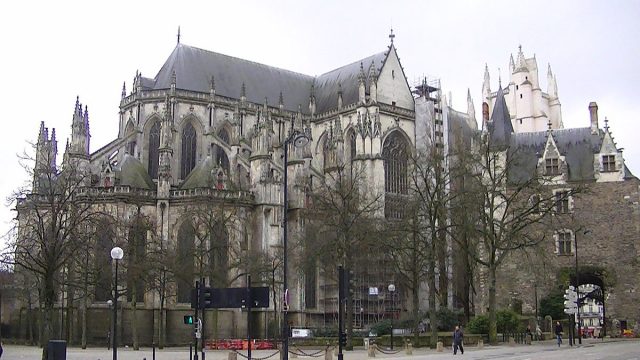 Last April Notre-Dame Cathedral in Paris was severely damaged by fire. Authorities and commentators alike are relieved a similar situation did not unfold here. With Notre-Dame the reaction was slower. People mistook the commotion for a false alarm and soon flames consumed the spire and roof.

As described by Smithsonian Magazine, “About 500 firefighters (and a 1,100-pound robot) battled the blaze, which raged for 12 hours.” The jury’s still out on what led to the fire. A “leading theory is that the fire started accidentally, perhaps in connection with an electrical short-circuit.” Cigarettes discarded by workers are also being factored in.

Who is paying for repair work? “As with the ongoing restoration of Notre-Dame, the French government owns Nantes Cathedral” writes Smithsonian Magazine, “and will foot the bill for its restoration with the help of donations”. The citizens of Nantes are no doubt grateful that a potential inferno was averted, saving them from the spectacle of one unholy mess…